The WIL at the September 15th National Anti-War March and Rally in DC. 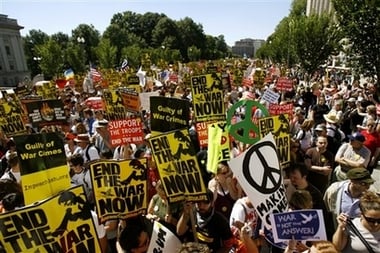 On September 15, several East Coast, Midwest, and Southern branches of the WIL took part in this fall’s first major national anti-war protest, which was held in Washington DC. Attendance was estimated at around 100,000 mark, with many youth and a large number of anti-war veterans present.

One of the major actions of the event was a mass “die in” on the steps of the U.S. Capitol building. There were large numbers of veterans involved in this action, which more than likely is what curbed the number of arrests that day, as the political blow back from a mass arrest of vets would further weaken the already low support for the war. The civil disobedience of the “die in”, while itself not a solution, does show the resolve of regular people to make personal sacrifices in an effort to end the war now. A full and open debate must take place within the anti-war movement, the labor movement and among the troops on how to harness all our energies in order to take collective mass action to end the war. There is the danger that some layers of the movement are becoming impatient and frustrated at the continuation of the war, and could move too far ahead of the movement, isolating themselves form it. A strong and unified movement is the best way to combat these tendencies.

There was also a counter protest of around 1,500 to 2,000, one of the largest of yet, and although the counter protest was composed of many veterans, the anti-war march had multiple thousands more veterans and their families. A number of the pro-war elements carried baseball bats with U.S. flags mounted on them, often accompanied by police escorts. This again underscores the need for unity in the movement, the larger and more secure the demonstration the less likely-hood of violence breaking out, which would be used as an excuse to repress protesters. United and safe demonstrations are also necessary to draw out more people. Our mass and disciplined numbers are the best safeguard against this tiny layer of society which the ruling class may well seek to lean on at some point to help physically break up demonstrations.

The comrades of the WIL sold the newest issue of Socialist Appeal as well as a flyer calling for maximum unity in the anti-war movement which received a lot of support during the march and rallies. A number of people recognized Socialist Appeal from previous demonstrations and approach our comrades to buy copies. Additionally several other works were sold, ranging from The Dewey Commission report on Trotsky to Ted Grant’s work “Against State Capitalism, a reply to Comrade Cliff”.

The organic connection between the war and the attacks on wages, education, infrastructure, etc. here at home is increasingly clear to those that oppose the war. The ideas of Marxism, which are the only answer to these burning questions, have an important role to play in this movement. We invite all anti-war activists who are seeking a road out of the impasse that imperialism has produced to contact the WIL so we can work together in building unity in the anti-war movement and to fight against the root cause of this war: capitalism!