The Wire and the American Nightmare

American capitalism has entered a period of acute crisis. Even the boom preceding this recession was marked by the emergence of a new “rust belt” – decaying cities such as Detroit and Baltimore that were once epicenters of the world’s most prosperous industrial working class. Baltimore, which is majority Black, used to have one of the U.S.’ most wealthy Black populations. It is now synonymous with crime, drugs and decaying industry, with the second highest murder rate in America. And all this even before the recession. It is no wonder many Americans feel like they have already been in a recession for some time. 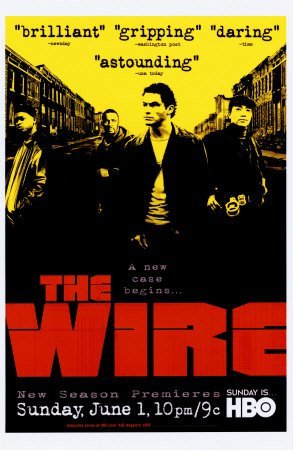 This is the backdrop to the highly acclaimed TV series, The Wire, filmed and set between 2001-7. The program so incisively dramatizes this social malaise that some critics have dubbed it the best television series ever. What is beyond doubt is that it truthfully tells the tale of the “betrayal of the American working class”, which was its creator David Simon’s goal. This is a program all socialists interested in the American working class should watch.

In the first season, the class-conscious low-ranking drug dealer D’Angelo Barksdale teaches his protégés the rules of chess by relating the pieces to the hierarchies of organized crime. The message is profound – these kids are at the bottom of a ruthless system of exploitation. The allusion to capitalism sums up the program’s over arching metaphor – organized crime is but a more direct form of capitalism. As D’Angelo’s class consciousness develops as he is used by those above him, he continues to draw the harsh lessons of capitalism, and he tells it like it is to his more naïve fellow workers. When discussing the inventor of chicken McNuggets, these kids feel a sense of pride at his achievement and inevitable wealth. D’Angelo destroys this illusion, pointing out that McDonalds’ owners probably stole the idea, leaving the inventor “in his cellar” and still working for those above him.

In capitalist society, production is unconsciously socially determined. Social labor presents itself as private, that is to say that what appears to the individual as his/her own work that he/she has decided upon, is actually socially determined through, amongst other things, money. We do not know the circuitous path our money has taken in order to reach us, nor where it goes when we spend it. Thus, when the renegade detective team decide to “follow the money” (rather than the drugs) in their investigation of a drug syndicate, it leads them to unexpected places – for example, into the accounts of big-shot Democrat senator Clay Davis. Of course, Mr. Davis is intimately tied up with the local establishment, including the Police bureaucracy. But the bureaucracy shows it is much more interested in protecting its privileges than successfully bringing a violent drug cartel to court, and as a result, the investigation is increasingly limited until it becomes pointless. In a later season, when Clay is handed a subpoena for his links to money laundering, he rages at the Mayor (a personal “friend”):

“I would expect this kind of sh*t from the FBI, but not some local police. I know I have paid far too much money to the Mayor for this sh*t. Ain’t no motherf*cker in the world so ungrateful as that. How do you think I afford a campaign into office? Where do you think my money comes from? A local grocers? You think I know where the money comes from? I’ll take anyone’s money if he’s giving it to me. I don’t have time to ask questions. You better call this subpoena off right now!”

That capitalism and the bureaucracy ares a mirror image of the crime world is brilliantly summed up in one court scene. The legal expression of the local drug syndicate, the corrupt, slimy lawyer Mori Levy, cross examines the rival (and principled) thug Omar, and in an act of vile sophistry, he cynically and hypocritically accuses Omar of feeding off society’s fear and weaknesses (which is exactly what Levy does!). Omar interjects with a comment so cutting in its honesty it stops Levy in his tracks: “Same as you. I got the shotgun, you got the briefcase. It’s all in the game, right?”

It is a constant theme that because of the interconnectedness of crime and politics, the capitalist state is incapable of solving capitalism’s constant social problems. When the principled detective McNulty forces the same lawyer into a concession, the police department’s attorney gets upset. “If I want a good future I can’t piss on the people that matter. Levy is on the Bar, I need his support.” McNulty retaliates, “If half you lawyers had the balls to follow through, if you didn’t want some nice career with some hotshot Downtown firm, then all those bastards like him would be immediately indicted. But no, everyone stays friends, and everyone gets paid.”

The second season focuses on the degeneration of the dock-workers’ union as their industry declines. The union leadership is sucked into the cruel logic of the market as it desperately attempts to bribe the bourgeoisie into acting in the workers’ interests instead of its own. Fearing the drying up of work, they pay politicians to invest in the docks. The trouble is, the money for this comes from smuggling on behalf of international criminal gangs. Because the local government wants to get rid of this pesky union, it exposes this scandal. As a result the politicians back out of the deal, no doubt leading to a jump in unemployment and a slashing of the union’s membership. The gang fears the union boss will snitch, so they execute him. Fundamentally, capitalism is in decline in Baltimore, so the workers cannot fight by paying the capitalists to help them. This is a brilliant metaphor for reformist policies of class-collaboration. The bourgeoisie discards the corpse of this union boss when he is no longer needed, just as they do with the political careers of our reformist leaders.

The Wire is an immensely profound work of art and dramatization of decrepit 21st Century capitalism. The Wire gives us glimpses of the barbarism that already exists within the system.  It really makes you wonder what the U.S. will look like once the coming worldwide slump has really kicked in. One thing is clear: the contradictions of the system cannot be resolved within the system itself. This is why all class conscious workers and youth who are fans of The Wire should join the WIL and the struggle for socialism.