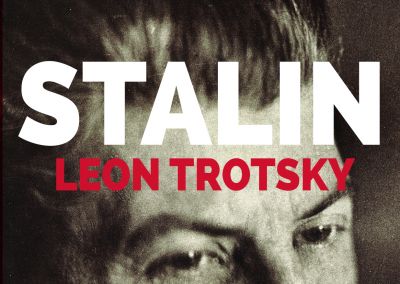 Our campaign for to raise funds for the first complete publication of Leon Trotsky’s biography of Stalin has been a resounding success! So much that we have raised our target in order to prepare a Spanish translation of the book. Below we also publish a video on the history behind the biography which has been 80 years in the making.

We publish here a video message from Rob Sewell, editor of Socialist Appeal, who collaborated in producing Wellred’s forthcoming publication, “Stalin”. Rob describes his visit to the Trotsky archives at Harvard university where the original material was found, and explains the importance of this new and most complete version of Trotsky’s unfinished masterpiece.

The response to our fundraising campaign has been remarkable. Half of the original £3,000 target was met within the first weekend of our Kickstarter campaign. We have received support for the project from the USA, Canada, Britain, Ireland, Belgium, Holland, Switzerland, Germany, Austria, Italy, Sweden, Denmark, Portugal, Israel and Australia. Messages of support have come in from around the world, demonstrating the wide interest and excitement this project has provoked.

[help the campaign and preorder your copy of the book here]

We have now surpassed our original £3,000 target, meaning the publication of Stalin in English is assured. Our campaign has generated £1,165 from those who will receive a discounted paperback version of Stalin as way of thanks. A further £1,959 was given by those who were willing to give a little extra for the hardback version, including those who wished for a copy signed by the editor, Alan Woods. A number of shrewd investors have given £820 so far in donations exceeding £100, each of whom will receive their choice in a range of special Wellred “packages” of Marxist literature: the “Trotsky Vs Stalin pack”, the “Soviet pack” or the “Complete Trotsky pack”.

Many unsung heroes have also donated without claiming a Kickstarter reward, from £5 to donations exceeding £100. We thank all of our supporters who have donated to the project so far! In total we have now raised more than £4,000 in donations.

However, we do not want to stop there. One of our aims is to produce as quickly as possible a Spanish version of the book. This requires additional financing for translation. Therefore, rather than rest on our laurels, we are looking to stretch our target and raise an extra £2,000 above our target, £5,000 in total, in order that Trotsky’s Stalin might be published in Spanish as soon as possible.

So please help us keep up the momentum. Advertise the campaign far and wide. Ask your local library or college faculty to stock a copy. Your further efforts, no matter how small, will be a real contribution development of international revolutionary Marxism within the Spanish-speaking world.