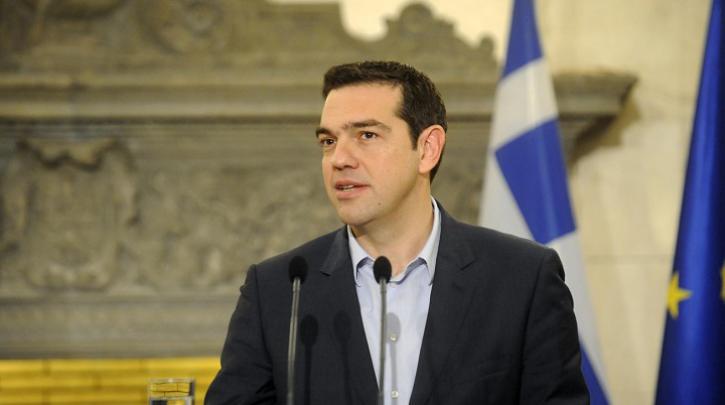 Saturday morning, June 27—A few hours ago, in a televised address to the nation, the Greek PM Tsipras has announced that he will put the the latest ultimatum from the Troika to a referendum on July 5. This marks a qualitatively new stage in the Greek crisis, one which can unleash the accumulated anger of the masses against the constant humiliation at the hands of the Troika.

“They asked the Greek government to accept a proposal that accumulates a new unsustainable burden on the Greek people and undermines the recovery of the Greek economy and society, a proposal that not only perpetuates the state of uncertainty but accentuates even more the social inequalities.

“The proposal of institutions includes: measures leading to further deregulation of the labor market, pension cuts, further reductions in public sector wages and an increase in VAT on food, dining and tourism, while eliminating tax breaks for the Greek islands.

“These proposals directly violate the European social and fundamental rights: they show that concerning work, equality and dignity, the aim of some of the partners and institutions is not a viable and beneficial agreement for all parties but the humiliation the entire Greek people.”

He made a direct appeal to the Greek people: “To the blackmailing of the ultimatum that asks us to accept a severe and degrading austerity without end and without any prospect for a social and economic recovery, I ask you to respond in a sovereign and proud way, as the history of the Greek people commands.”

To understand how we got here we need to go back to the beginning of the week. We have already explained how the Greek government presented a document to the Troika which already included many measures breaking the government’s own “red lines.” It was an 8bn euro package including severe indirect cuts on pensions, VAT increases, and also some degree of increased taxation on the capitalists.

The IMF responded in a very provocative way, with a counterproposal which basically put the whole weight of the 8bn euro package on the shoulders of working people by demanding further and swifter cuts in pensions, higher VAT rates, and much less taxes on businesses. This counterproposal was debated at length over a series of meetings. The positions were getting close, with the Greek government making further concessions. When a deal seemed to be very close, the main stumbling block was the refusal of Germany and Finland to offer any substantial debt relief in exchange for the Greek government accepting all of their harsh austerity measures. All that was included was a five months’ extension of the current memorandum, allowing Greece access to some 15bn euro remaining in the current bailout plus a smaller amount from ECB profits on Greek bonds.

Conversations broke down, and an ultimatum, yet another one, was issued by the Troika to the Greek government. This is a final offer, they said, take it or leave it. This reveals two aspects of the problem. On the one hand, within the limits of capitalism there is no real solution to the debt crisis of Greek capitalism, as it means someone else has to bear the burden. On the other hand it is clear that there is also a political aim on the party of the Troika, that of humiliating the SYRIZA government as a way of preventing contagion. If they were to allow the Greek government to be seen as implementing a policy different from austerity and cuts, then that would quickly spread to Italy, Portugal, Spain, France, Ireland, etc.

Tsipras was fully aware that the mood at home was turning, and very quickly. Staunch SYRIZA supporters were expressing their opposition to the never ending concessions on the part of the government in the strongest terms. There wasn’t any guarantee that any of these concessions would be passed through parliament, as the left wing of SYRIZA couldn’t be relied upon to vote for them.

The scenario of a parliamentary coup was attempted, with the Troika leaning on the leaders of To Potami and New Democracy and the right-wing president of the republic (appointed by SYRIZA) talking about the need for a “broad democratic front.”

In the end, the intransigence of the Troika, their impossible demand that the whole weight of the package should fall on the workers and pensioners, and their refusal to offer any meaningful debt relief on the one hand, and the increased opposition of the masses, reflected at all levels within SYRIZA and the government, made a deal impossible. The class struggle, in a distorted way, set its stamp on the negotiations.

To understand what is intended with the referendum, we can listen to what the minister of administration reform, Katrougalos said: “A no vote in the referendum would give the government a mandate to go back to the lenders and seek a better deal from them.” This is also clearly seen in the references to European values in Tsipras’s speech. The leadership of SYRIZA remains firmly attached to the idea that it is possible to put an end to austerity by getting a deal from the Troika. Their idea of the referendum is not to get a decisive mandate to break with the Troika and austerity, but rather to get a stronger bargaining position in the negotiations.

They would be in favor of accepting a few modifications to their proposal from June 22 as long as they got substantial debt relief in exchange.

But the call for a referendum has set in motion forces which are out of the control of the government. Over the last few days there has been increased polarization in Greek society, and the accumulated sense of being humiliated by the Troika will now boil over. The mood of the masses will be one of saying, “Enough is enough! Enough humiliation! Enough concessions! Time to fight back!” There will be genuine enthusiasm for OXI, a resounding NO vote linking up with the best traditions of resistance of the Greek working class movement. The referendum could get a big majority against the ultimatum. Varoufakis mentioned the figure of 50 plus 1 as a clear mandate against the agreement, but the referendum could perhaps get 60, 70, or even 80% voting against. These were the figures of support for the government we saw in the first week of February when it seemed to be taking a firm stance against the troika.

There will be, however, a massive campaign of fear on the part of the capitalist media, which will present this as a referendum in which people have to choose between remaining in the euro or all hell breaking loose. However, the attitude of the people has also hardened over the last few months on the question of the euro. Yes, people don’t think an exit from the euro is a solution, but they definitely reject the current “deal” which is being offered. They have learned from their own experience the calamitous impact of austerity packages imposed by the Troika. Worse than that, they know for a fact that all the sacrifices and pain imposed is useless, in the sense that it doesn’t even solve the crisis or resolve the problem of the debt. They will not be so easily threatened this time.

However, this is not a normal situation. This is not going to be the case of a government calling a referendum and then running a calm and civilized campaign of arguments for a week. Not at all. First of all, Tsipras needs to get the referendum approved in parliament. Already PASOK leader Venizelos has accused Tsipras of staging “a coup”! What a scandalous hypocrisy! He has used the fact that technically, according to the Greek constitution, no referendum can be called on a fiscal issue to appeal to the president of the republic not to sign the call for it. Here we see the importance of the figure of the president, which was supposed to be “purely ceremonial,” and the correctness of the position of the Communist Tendency of Syriza when it criticized the fact that a right-winger had been elected for the position at SYRIZA’s proposal.

Aside from the constitutional aspect, the Troika still holds the threads to the purse, through the ELA mechanism for maintaining the liquidity of Greek banks. The European Central Bank will hold an emergency meeting on Saturday morning to decide whether to extend it. Without it, banks will not be able to open on Monday. As happened in Cyprus, that is a very powerful tool in the hands of the Troika to force a government into submission.

There is also the issue of the IMF debt repayment of 1.5bn euro due by Tuesday, June 30. Without an agreement, or at least the concession of an extension, Greece won’t be able to pay, triggering a default. All of these measures and more will be used to blackmail the Greeks and SYRIZA’s government. However, in these conditions, any further provocations will only have the effect of polarizing the situation even more, radicalizing the Greek workers. We have definitely entered a new stage in the Greek crisis.

Tsipras’s speech contains a series of references to having asked Europe for some leeway: “I have already informed about my decision the President of France and the Chancellor of Germany, the President of the ECB, and tomorrow my letter will formally ask the EU leaders and institutions to extend for a few days the current program in order for the Greek people to decide, free from any pressure and blackmail, as required by the Constitution of our country and the democratic tradition of Europe.”

Of course, it is correct to ask, but it would be suicidal to rely on the goodwill of the same institutions which you have just accused of blackmail!

It is now time to take decisive action. This referendum cannot be fought and won just at the ballot box, but above all through the class struggle in the streets, workplaces, and neighborhoods. There are already demonstrations called for today and Sunday. These should be massive, as a show of strength of opposition to the Troika.

The government should immediately take defensive measures including the nationalization of the whole banking system to prevent massive deposit withdrawals. The government should also seize the property and assets of the main capitalists and companies to prevent capital flight. Workers should occupy their factories and workplaces, open the books, and establish workers’ control and vigilance to prevent sabotage and hoarding.

The Greek capitalist class will not hesitate to use all means at their disposal (legal and illegal). The main unions should convene a national congress of the working class, with delegates elected from the workplaces and working class neighborhoods to coordinate the struggle and exercise vigilance.

Furthermore, the struggle cannot be waged or won simply on the basis of the idea of exerting pressure on the Troika for a better deal. That idea has proved to be completely bankrupt by the events of the last 5 months. What is needed is a clear break with Troika, through the repudiation of the debt and a program of bold socialist measures.

Internationally, the labor movement and revolutionary activists have a great responsibility. We should all discuss how can we, in the course of the next few hours and days, mobilize the largest amount of people possible against the Troika and in defense of the Greek working people. This is also our struggle. At stake is not just the fate of the Greek people, but that of workers across Europe. This is not a national struggle, but a class struggle. The greatest battle is being prepared.

Victory to the Greek working people. Down with the Troika. Break with capitalism. International solidarity.