Twin Cities: Strikes and Organizing on the Rise as Workers Fight Back 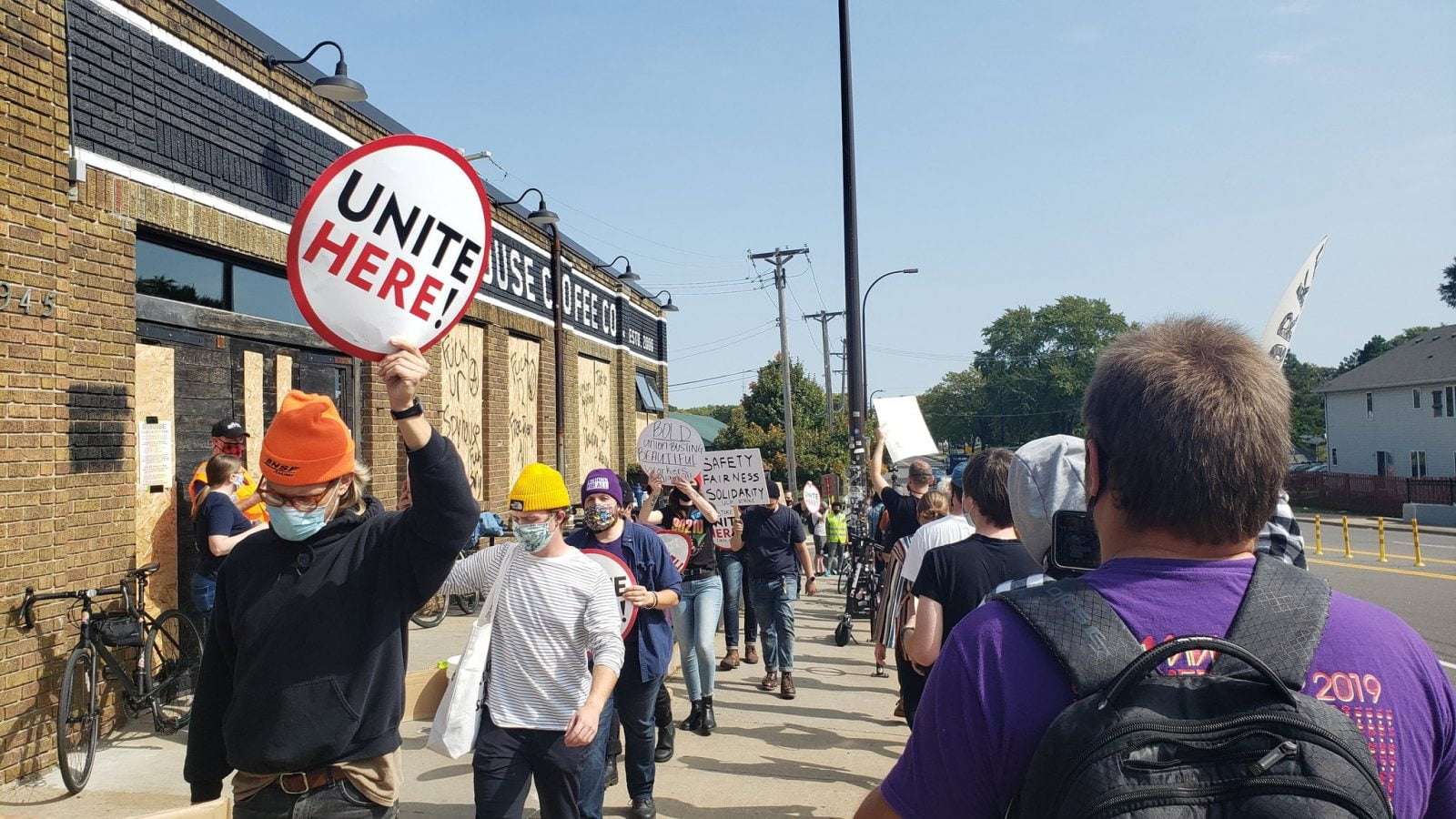 The US has been rocked this year by one earthquake after another. The pandemic and the ensuing economic crisis have thrown capitalism into a deep crisis, and there is no indication of a swift recovery. We can add to this the incredible mass movement against police terror. The stage has been set for a new offensive by sections of the working class. Although its methodology isn’t entirely consistent, the Payday Report has identified over 1,100 wildcat strikes across the country since the beginning of the pandemic. Of these, 750 occurred between June and the beginning of September!

This wave has made itself felt here in the Twin Cities, the home of the George Floyd protests that shook the country. Multiple strikes and unionizing campaigns have rippled across the metro area, with frontline workers having to confront the bosses to get essential PPE and clear communication about healthcare benefits, hazard pay, and shutdowns. These actions have involved healthcare workers, the service sector, and others. A fresh, young layer of the working class has been brought into the harsh school of the class struggle. Many of the same people that participated directly in the Black Lives Matter protests over the summer were also seen on the picket lines.

One high-profile labor action took place at the Surly Brewing Company, a local craft brewery. Just days after the workers announced their intent to unionize in August, Surly said they would be closing indefinitely later in the year. Perhaps because of the threat to close, the turnout for the vote to unionize was low, and ultimately the union lost by a single vote, even though 76% of those that voted were in favor of the union. Hours later, the owner was seen out on the town, celebrating the vote, cheering “we win, you lose!” Even though the battle was lost, the campaign exposed the class conflict between the bosses and the workers, showing everyone who followed the campaign exactly why a union is needed. Surly wasn’t the only campaign brewing—the workers at Fair State Brewing, Lawless Distilling, and StillHeart Distillery all unionized in September.

A recent example of a strike in the woefully unorganized service sector is that of Spyhouse Coffee. The service sector is mostly unconquered territory for unions, and it is also primarily made up of young workers. When the Minneapolis comrades of the IMT showed up to the picket line to support the strike, we learned there were many issues that had built up before a strike was called. The workers began their effort to unionize after receiving no communication about the initial shutdown in May when they were not told when or whether the coffee shop would reopen.

Our comrades in Minneapolis on the picket line, supporting Spyhouse coffee shop workers in their struggle for a union! @unitehere #UnionStrong #strike pic.twitter.com/ScKtG0YCU6

When Spyhouse Coffee did reopen in June, there was a long delay in getting a plexiglass barrier and sufficient hand sanitizer. Only after repeatedly being ignored and essentially given the cold shoulder did the workers move to form a union. Management tried various tricks, lies, captive audience meetings, and the owner jokingly offered to “sell” the business to the union. The workers responded by going on strike on September 19. The campaign, heavily publicized on Instagram, received overwhelming community support, particularly from the other recently unionized workers in the foodservice and brewery industries.

On October 5, there was also a two-day strike involving technicians at two Allina hospitals. Their demands were nothing extravagant: a pension plan that cost the administration nothing, free COVID tests, and access to the same protections afforded to other hospital workers. Many nurses with the Minnesota Nurses Association showed up in support of the picket line. When one of our comrades in Minneapolis talked to some of the workers, there was resentment towards the tier system that the Allina administration exploits to divide the workers who share the same working conditions and who require the same protections to fight COVID-19.

It is clear that some sections of the American working class are beginning to fight back against the bosses. The greatest push started in the weeks following the George Floyd protests, which demonstrates that mass movements serve to embolden the whole working class. Recent strikes have been held on the question of insufficient safety precautions regarding COVID (particularly in the health and service industries), or in solidarity with the Black Lives Matter movement.

The majority of strikes as of late have been of a spontaneous or wildcat nature. They have been sparked by young, unorganized workers, often fighting for union recognition as a fundamental demand. These fresh, inexperienced layers generally are not in existing unions: According to the Bureau of Labor Statistics, about 13% of workers aged 45–64 were members of a union, while this number drops to 8.8% for those aged 25–34, and just 4.4% for those aged 16–24. Yet, it is precisely these workers who are taking the lead. Despite their inexperience, these workers are not afraid of class-struggle methods and are wise to the maneuvers of management. The Spyhouse Coffee workers stated they were wary of any “tricks” and refused to let themselves be divided, insisting the union represent everyone. These early battles are preparing the ground for a makeover of the US labor movement.

Not all of these efforts are successful. Small-scale strike actions, particularly in the “low-skill” service sector, are threatened by scabbing and lack of resources, as well as the possibility that owners can simply shut down the workplace. The next step to guarantee success for the workers is to link up and coordinate struggles with each other and the broader labor movement. For example, the MNA president says if they and the SEIU (another union at the hospital) had fought together, the Allina technicians’ strike would have been strengthened significantly—had the nurses also gone on strike alongside them.

During the great 1934 Teamsters’ Strike here in Minneapolis, the city was notorious as an “open shop town” where successful strikes had been few and far between. This “scab’s paradise” was overturned entirely in the aftermath of the strike, and thousands of workers in various industries became newly organized as a result. How was this accomplished? The creativity of the rank and file was firmly connected with the strategy and tenacity of a Trotskyist leadership to keep the strike going despite attempts at scabbing and attacks by the police and National Guard. However, what ultimately forced the employers to concede was workers in the rest of the city joining them in stopping the bosses’ efforts to keep goods flowing. Normal commerce was impeded for more than a month, and the bosses finally threw in the towel.

Additionally, making connections to the powerful anti-racist movement can give a significant boost to workers’ efforts around the Twin Cities. In the wake of the George Floyd protests, there has been a buzz of attention around the question of anti-racism in every workplace. This provides an opportunity for unions to become fighting anti-racist institutions, demonstrating not just in words but in deeds the power of solidarity and the unity in action of all workers. This can be done by actively participating in the Black Lives Matter and related movements, using the power of labor to fight for systemic change. Only on this basis can it be revealed who must really be fought: the capitalist class.

Workers looking to fight back against the boss and win need to learn these lessons, past and present. The working class can win against smaller companies and giant firms like Amazon, but to do this, we must prepare. We need to build Marxist political leadership in the already established labor movement and among the newly organizing workers. With political understanding, starting with the understanding that class independence is essential and that production must be brought to a halt, the working class can be prepared for the many obstacles we will face.

However, even the finest strike actions can see their gains clawed away down the line, as long as the capitalist exploiters continue to rule over us. This is why the workers must also fight for political power. The unions should break with the Democrats and Republicans and work towards the construction of a mass working-class socialist party that genuinely represents the working class on the political front. Ultimately, the working class must take control of society for itself so that the struggle for a real human existence can finally be overcome.