Union Organizing on the Rise 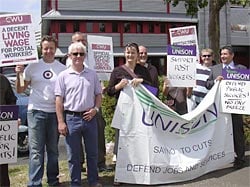 The U.S. Department of Labor recently reported that 311,000 more workers joined unions in 2007.  While in 2006, 12 percent of wage and salary workers belonged to unions, 12.1 percent are in unions as of 2007.  This growth in unionization took place in spite of the fact that many unionized industrial jobs were eliminated in the automobile and related sectors. The report showed that 35.9 percent of public sector workers are in unions, while only 7.5 percent of the private sector was unionized.  As recently as twenty five years ago, 20.1 percent of the labor force was unionized. How did we go from strong powerful unions to where we are today?

In the 1930s, during the Great Depression, only a small percentage of U.S. workers were in unions.  The working class was suffering from the poverty imposed by capitalism.  Members of the communist and socialist movements, as well as other working class activists, led many militant struggles which forced the employers to recognize their unions and give certain concessions in terms of improved wages, benefits and working conditions.  The labor militants of the 1930s were not afraid to mobilize mass actions and did not obey all of the anti-labor laws, which are put in place to defeat the labor movement.  In some cases, “sit-down strikes” were organized where workers occupied the factory or work place and refused to work or leave the premises.

As a result of those struggles, the labor movement greatly increased union membership to close to 40 percent of the work force, mostly in the private sector.  After World War II, the destruction of the war led to a post-war boom that led to a rise in living standards for much of the American working class.  Given the strong unions and many hard-fought strikes, the capitalist were able to give some crumbs from their table of super profits, as long as their system was growing.

The recession that began in 1973 was the signal of the end of the long post-war boom of American capitalism.  The capitalist class now decided that to restore their rates of profit, they must take on the unions and drive down wages, benefits and working conditions.  Especially after the defeat of the Professional Air Traffic Controllers Organization (PATCO) strike in 1981, the percentage of unionized workers steadily decreased as heavily-unionized industries down-sized and the employers started to fight against new unions more ruthlessly.  In some cases, the employers were able to win decertification campaigns where formerly unionized work places became non-union.

Unfortunately, the labor leaders did not organize any real resistance to the attacks by the employers.  The PATCO workers were fired without any attempt at broad mobilization and sympathy strikes. Other unions accepted concessions with their leaders telling them that “once times get better, we will get back from the employer what we give up today.”  Of course that turned out to be a big lie. Organizing new workers into unions was not given any priority and many unorganized workers wondered, if the boss took them on and they got fired, what would  the union do to defend them? The result is the low unionization rate that we have today.

Unorganized workers are in desperate need of unions.  Employers have taken away benefits that used to be a given in the American work place such as paid health benefits, pensions, paid vacations, sick leave, seniority rights and paid holidays.  In work places without unions, many workers live under a “reign of terror” where the employer can fire people at will.  Polls have shown that many workers, who do not belong to a union, would like to join one.  Statistics show that unionized workers make more in wages and benefits than non-union workers.  Why aren’t the unions growing rapidly?

The leadership of the AFL-CIO and Change to Win accept capitalism as the only possible economic system.  They refuse to see that a socialist system could pose as an alternative to the misery of the present. Therefore, they try to organize workers within the frame work of the present laws, which are intended to maintain capitalism.  They limit the demands of the workers they represent to what big business “can afford.”  As a result of these policies, many workers do not see the unions as something that can change their lives for the better.  For example, if workers at Toyota and Honda want better wages and working conditions, will they be inspired to join the UAW, whose current leaders are negotiating contracts that include many give-backs and concessions?

For many years, the labor leaders tried to organize workers through elections supervised by the National Labor Relations Board (NLRB). The NLRB is a federal agency that claims to be impartial. It was designed  to allow workers to join unions– – without disrupting the workplace – when it was precisely these disruptions that led to a huge growth of the labor movement in the past. The NLRB process also has many loopholes that allow the employers to manipulate the situation. As a result, many unions have “lost” their union certification elections.

Also, the labor leaders put more time, money and resources into supporting Democrats and some Republicans running for office than into organizing new members.  The labor leadership counseled that these alleged “friends of labor” would help the labor movement gain new members even though these “friends” did not even promise to repeal the Taft-Hartley anti-labor laws.

More recently, the labor leaders have tried to organize workers with the demand for a membership “card check” process in which workers merely need to sign a card stating they wish to be represented by a union, which would bypass the NLRB.  This is a good idea, but it depends on the power of the labor movement to strike or otherwise disrupt production / delivery of services for those employers who do not accept the card check.  For the most part, the current labor leadership has not mobilized the work force to apply the pressure that could make the card check strategy extremely successful.

In order to reverse the long-term decline in unionization rates, the labor movement must launch a massive organizing campaign. Anyone who wants better wages, benefits and working conditions, and increased rights at work should be encouraged to join the unions as “at-large members.” The organizing campaigns should also focus on younger workers.  Whereas 12.1 percent of all workers are in unions, only 4.8 percent of workers age 16 to 24 are in unions.

The labor leaders need to fight for a minimum wage of at least $10 per hour,  paid sick leave and vacations, etc. This could mobilize workers already in unions to come out and support these drives by having organizers speak at meetings, rallies and at the workplace. The labor movement as a whole could also target a specific employer, such as WalMart or one of the big banks, which has branches  and call centers nationally, filled with employees who are working in “money factories.”  Once a major victory is achieved, the organizing would snowball as it did in the 1930s.

A key part of the battle to organize the unorganized must be to stop the policy of accepting give-backs and concessions in contracts.  By mobilizing unionized workers to help organize new unions, these fresh forces would help all union workers fight for higher wages and benefits. Just as an injury to one is an injury to all, a victory for one is a victory for all.

Although it is difficult to judge the results from just a single year, it is good to see more workers joining unions despite the labor leaders’ present policies. The urgent needs of workers to fight back against the bosses will at a certain point lead to a change in policies or to a change in leadership.  If you too, want to help build a stronger labor movement, contact the WIL.