US and Chinese Tech Capitalists Versus Tech Workers

In every sphere, technological, economic, and military, the era of unquestioned US dominance is over. While the US is still the most powerful imperialist force on the planet, it can no longer be assumed to be the most powerful force in any given context. The growth of the Chinese tech sector is a significant factor in the ongoing US-China trade dispute, which Trump has been consistently incapable of resolving. At root, the trade war reflects the struggle of rival capitalist blocs maneuvering against each other for advantage on the world market. To break the impasse US Treasury Secretary Steven Mnuchin has raised the possibility of a “two-way” agreement between US and China. The Financial Times reported in April on the potential hazards of such a bilateral agreement cannibalizing the support structures for globalized trade, including the WTO, in order to squeeze out a few more years of surplus from the decrepit capitalism that framework was erected to protect. But in an epoch of crisis, these struggles will only intensify.

Chinese technology firms are well positioned to play a dominant role in new advances in mobile connectivity globally. US tech capitalists are alarmed by this and acting out against Chinese companies, in particular the device manufacturer Huawei. Meng Wanzhou, the Chinese tech company’s chief financial officer, was detained in Vancouver on December 1 at the request of US authorities. Trump has indicated he could intervene in her case in exchange for trade concessions. US intelligence agencies have recommended that American citizens avoid using Huawei phones, and US government agencies have been banned outright from using Huawei technology, on the premise that Chinese-developed devices are a risk to privacy and security. 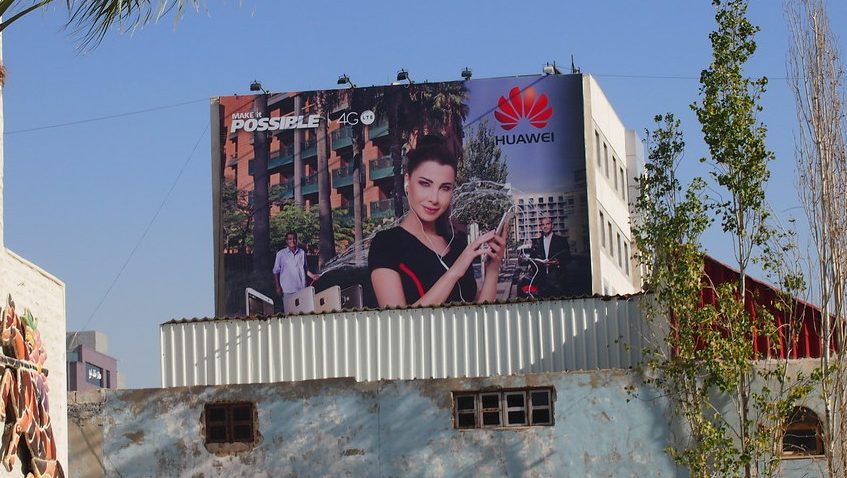 US tech capitalists are alarmed by the growth of Chinese firms and are acting out against Chinese companies, in particular the device manufacturer Huawei. / Image: Isriya Paireepairit via Flickr

Extending into US foreign relations, Secretary of State Mike Pompeo has asserted that the US will limit involvement with countries that use Huawei networks. This concern is laughable, originating as it does within the belly of the largest spying apparatus in the history of the planet. None of this has prevented European countries, including the UK, from embracing Huawei to drive their adoption of next-generation 5G networks, reflecting a broader trend. Google executive Eric Schmidt recently described the situation for a meeting of venture capitalists: “The most likely scenario now is not a splintering but rather a bifurcation into a Chinese-led internet and a non-Chinese internet led by America.”

The relationship between tech capital and the state in China is, as elsewhere, mediated by the role of finance capital. In the absence of democratic and rational central planning, venture capital steps in to play a central coordinating role and it is possible to discern large scale trends by understanding flows of investment capital. The Financial Times recently reported that only $6.3 billion has been invested in Chinese tech so far this year, down from $16.3 billion in the same period last year. This reflects both the US-led panic about Chinese technology, and the increased orientation of Chinese technology firms to foreign markets, particularly Southeast Asia, where investment has risen by an order of magnitude in the same period.

In the age of imperialism, capitalism must incessantly find new areas of the world and fields of investment from which to extract profits. The internet constitutes a new and important field of economic battle, where, after some decades of growth in relatively unregulated conditions, the same monopoly patterns can be observed.

With the development of monopolies, the financial system takes on an increasing role, as can be seen in the dynamic of venture capital circling around exorbitant valuations ascribed to increasingly dubious startup companies. As core markets are saturated, the export of capital to new areas becomes central, leading to the division of territories between the various capitalist cartels. The ever-closer ties between these combines and their associated state apparatus evolves to consolidate and defend this division. The resulting trade wars, spying networks, and arms races are carried out for this reason—in the name of “the nation” as a whole.

The large technology monopolies now form an integral part of this system. As long as capitalism is allowed to continue, the future development of technology will almost certainly hinge on the involvement of the US, China, or both. On this basis there can be no lasting solution to the trade crisis because this reflects the reality that the main imperialist blocs have exhausted all of the main markets. It can only be resolved by a qualitative shift to a new level—the end of the for-profit system.

However, the factors that lead to the exploitation of workers, in technology or anywhere else, are the same factors that position workers to make that qualitative shift to socialism. A recent increase in militancy among software producers in both the US and China show that these workers are beginning to draw these conclusions.

Recently a shared project documenting the workplace abuses of managers in Chinese tech companies has become popular on the code sharing platform Github, owned by Microsoft. These firms include Alibaba, JD.com, and ByteDance, which have recently come under scrutiny due to their institution of “996” working hours, whereby workers are expected to work from 9 a.m. to 9 p.m., 6 days per week. The Github project is titled “996.icu,” a reference to the likelihood of this schedule ending with workers visiting the intensive care unit. Tech workers in US should support their class siblings in China and fight for civilized working conditions and the equitable and responsible development of technology. This means joining the fight for socialism.