US Youth Fight Back: Only Socialism Beats Trump! 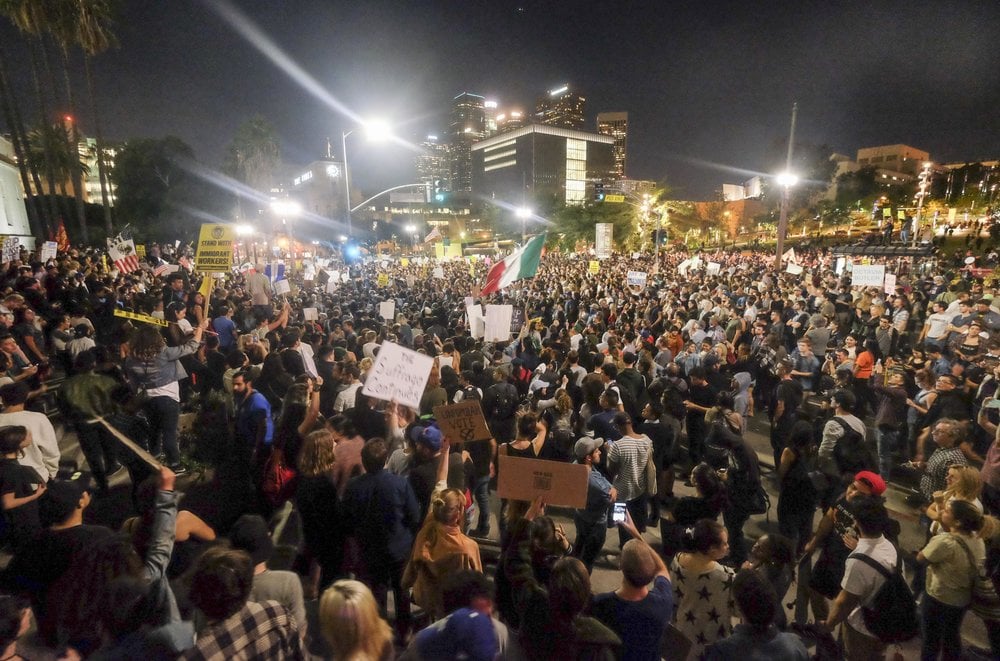 According to insider reports, the Republican National Committee and even Donald Trump himself did not expect the result.
Midway along the journey of our life
I woke to find myself in a dark wood,
for I had wandered off from the straight path.
How hard it is to tell what it was like,
this wood of wilderness, savage and stubborn
(the thought of it brings back all my old fears),
a bitter place! Death could scarce be bitterer.
But if I would show the good that came of it
I must talk about things other than the good.
—Dante Alighieri, The Divine Comedy: Inferno (Translation by Mark Musa)
GW Bush’s two terms saw millions on the streets to protest his “election” and subsequent wars on terrorism and the world. By comparison, the eight years under Obama have been a relatively quiet time for the class struggle, with very few mass protests, marches on Washington, or major strikes. The Great Recession had a sobering effect, the labor leadership moved far to the right, cowering in fear of the “greater evil,” and despite a handful of important upsurges, a certain amount of apathy and cynicism crept in.

That era ended the night of November 8. Although Trump will not be formally sworn in until January 20, 2017, we have entered a new epoch, one in which the accumulated pressures and contradictions of the last few decades will come roaring to the surface. The past is no indication of the future. Conditions and consciousness have changed and are changing—and it is only the beginning. Just as Trump’s victory made the original Brexit look like a tea party, the scale of class struggle on the agenda in the years ahead will put the Wisconsin Uprising, Occupy,  Black Lives Matter, and the movement around Bernie Sanders in the shade.

The youth fight back

While millions of blue collar and rural working-class Americans celebrated their double middle finger to the 1%, millions of other workers and youth did their best to digest the bitter pill of the failure of lesser evilism. Millions are truly traumatized, genuinely saddened, and understandably disturbed. They cannot imagine a world in which a bigoted billionaire bully is the top official in American political life. But countless others are outraged, viscerally affected, and ready to fight.

In the wee hours of November 9, just moments after the results were announced, spontaneous protests erupted across the country from Pittsburgh to Portland. While the liberal apologists for the crimes and failures of Clinton and the Democrats panicked and despaired, the instincts of the radicalized youth came alive. This is the Sanders movement 2.0, no longer attempting to transform the Democrats through primaries and caucuses, but pouring emotionally into the streets to make it clear that they refuse to live in a country where racism, sexism, homophobia, poverty, unemployment, and homelessness are allowed to fester.

Within hours, scores of emergency meetings and protests were organized on social media, from New York City to Indiana, Oakland to Minneapolis. High school students at several schools staged walkouts, and rallies were held on dozens of university campuses. Some protesters have burned the American flag, while chants of “Fuck Trump!” “Not my president!” “Racist, sexist, KKK! Donald Trump go away!” rang from the throats of the thousands who marched across Manhattan to rally outside Trump Tower. The mood was summed up by Adam Braver, a student at UC Berkeley: “We can’t just sit back and let a racist and sexist become president . . . He makes us look bad to the rest of the world. This is the beginning of a movement.”

The comrades of the US section of the IMT energetically participated in a dozen of these rallies, with the new, hot-off-the-press issue of Socialist Appeal selling out at the march in NYC. The enthusiasm and élan of the continuing protests is a sight to behold. It shows the revolutionary potential that exists in hundreds of cities, large and small, across this continent of a country. The demonstrations and meetings must and should continue. However, if the workers and youth of America and the world are to have a better future, protesting will not be enough. Our historic task is not merely to register our discontent with the system, but to end it once and for all.

Trump will rule over an economic and social crisis of titanic proportions. He will not be able to deliver on his promises. Millions have already had their illusions in the system burned out and millions more will follow. Predicting the precise results of the election was impossible, but we can be sure of one thing: in the weeks and years ahead, the class struggle will intensify, with ebbs and flows, in the factories, on the campuses, and on the streets.

It was reported that the Canadian immigration website crashed on election night. Apparently, many Americans think that by fleeing the country, they can solve their problems. But the crisis of capitalism is global—there is no escaping it. From Canada to Scandinavia, all the gains of past working class struggles are being whittled away. When confronted by our class enemies, when it is a choice between fight or flight, we must follow the lead of the youth and fight!

Life teaches and we learn from experience. Trump’s victory will serve as a wake-up call, a harsh reminder that change cannot merely “believed in” or “hoped for” in the abstract. It will not come by voting for the parties of the status quo. It will have to be fought for. Americans are sick of the status quo and want a change. They want to take their destinies into their own hands. They want quality jobs, healthcare, education, security and a rising quality of life for themselves and their loved ones. Under capitalism, none of this is possible. Whether they know it yet or not, what they want is a socialist revolution. That is the path we are now on.

It won’t be easy, and it won’t be overnight, but we can make this a reality in our lifetimes. The clear lesson of Tuesday’s election is that, in the words of Frederick Douglass, “if there is no struggle, there is no progress.” Life is struggle and we should embrace it. What lies ahead is an exciting era of struggle for a better life for all. The example of the youth should fill us with enthusiasm and optimism for the future.

Only socialism can beat Trump! Join the IMT in the struggle for a better world!