Venezuela: Big Victory for the Revolution, Time to Build Socialism in Practice!

The result of yesterday's referendum on the constitutional amendment was a huge victory for the forces of the Venezuelan revolution, and at the same time a severe blow against the counter-revolutionary right-wing opposition. The amendment, which will allow Chávez to stand as a candidate in future presidential elections, was passed with a resounding 54,36% (6,003,594 votes) in favor, with 45,64% (5,040,082) against. Furthermore, there was massive participation of nearly 67% of the electorate. 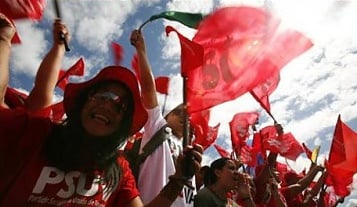 With a nearly one million vote difference and a 10 percent margin, the victory was even greater than most people had expected. Apart from the overwhelming victory in the 2006 presidential elections, in which Chávez won 7 million votes, this was the greatest number of votes for the revolution in the last 10 years. Even in a region where the opposition managed to win in November, Carabobo, the "YES" vote won with 52.06% against 47.94%. Also in Distrito Capital (the Caracas region), where the counter-revolutionaries managed to win an overall majority in November, the amendment was approved with 51.87% for and 48.13% against.

This shows the level of mobilisation of the rank and file of the Bolivarian movement. We get a similar picture if we look at the traditional strongholds of the opposition. In Nueva Esparta (Magarita Island), the "NO" vote only managed to win with a minimal difference: 49.26% "YES", 50.74% "NO".

If we compare the overall "YES" vote to previous votes for Chávez and the PSUV, we can see a clear increase in support. In the regional elections of November 2008, the PSUV and other Bolivarian candidates got 5.5 million, compared to 6 million "YES" votes in yesterday's referendum. However, the opposition also won more votes, reaching 5 million "NO" votes, compared to 4 million in November. This shows the extreme polarisation in Venezuelan society.  It should also be taken into account that the electorate has grown from around 13 million in 2004 to around 17 million today.

The whip of the counter-revolution

The main reason why the referendum was won this time as opposed to 2007, was the mobilisation of the masses. As we have explained in previous articles, the masses saw this referendum in clear class terms. In spite of the serious problems and deficiencies that are present in Venezuelan society, the undoubtedly great amount of social welfare that the Revolution has brought is a powerful attraction. We cannot underestimate the impact of achievements such as Barrio Adentro and CDI (free basic healthcare centres in poor neighbourhoods), misiones (free educational and other social services programmes), the Bolivarian Universities (allowing access to thousands of previously excluded students, mainly urban poor and working-class youth), etc.

For the masses these are concrete conquests, the product of ten years of revolutionary struggle. They will not see them destroyed by the right-wing without a fight. This was also shown in practice in November. Just after the victory of Radonski, a semi-fascist right-winger, in the regional elections in the state of Miranda, he began to attack the misiones and Barrio Adentro.

In an article written at that time we outlined some of the threats and attacks of the opposition:

”In fact, Chavez, in his speech detailed a long list of attacks against health clinics and educational programmes. Here are some of them:

The response of the masses was swift. In Miranda, tens of thousands took to the streets and similar demonstrations took place throughout the country. This underlines yet again a general feature in the Venezuelan revolution: every time the whip of the counter-revolution gone into action, the masses have moved to defend and deepen the revolution.

This also explains yesterday's overwhelming victory. The masses understood that this referendum would be a crucial factor in deciding the fate of the revoution. If the counter-revolution gets its hands on the presidency, they would go on to destroy all the gains of the revolution.

The streets belong to the revolution

As shown in the final results, the balance of forces remains extremely favourable for the revolution. But the figures do not show the real correlation of forces in Venezuelan society. The mobilisation among the revolutionary rank and file was tremendous. Hundreds of battalions of volunteers were organised for the campaign. 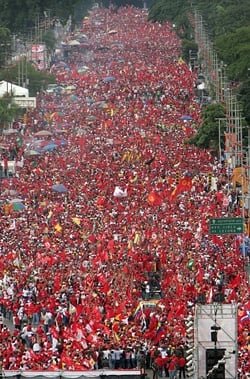 In all the big cities, "puntos rojos" (red squares) were organised where  permanent stalls were set up to discuss with people and hand out agitational flyers.  The most militant sections of the working class organised themselves into the "Front of workers for the 'YES' vote" which organised huge rallies and mass meetings all over the country. This mobilisation was also seen when one million people marched in favour of the "YES" vote on Thursday 12th of February.

Among the youth the situation was crystal clear as well. While small groups of counter-revolutionary students (mainly the sons and daughters of the petty bourgeoisie) tried to promote violence, 100,000 Bolivarian youth demonstrated for the "YES". Whereas the oppositionist youth organisations are largely empty, the PSUV Youth has around 140,000 members.

On election night, the streets of Caracas were completely controlled by the revolutionaries. Hundreds of motorbikers with red flags drove around the centre. The mood was euphoric as people waited for the results. Hundreds of thousands waited anxiously around the Miraflores Palace to hear the final results, and cheered and chanted militant slogans when the victory was announced.

All of this shows the enormous potential still present in the situation. Even after 10 years of revolution, the masses are still loyal and stand firmly behind Chávez. With this magnificient force it is entirelypossible to deal a final blow to the olicharchy and complete the revolution by expropriating the banks, the lands and the industry.

Yet again, the counter-revolution displayed its completely un-democratic behaviour. In the electoral campaign they used both parliametary and extra-parliamentary tactics. There was an outburst of violent clashes between petty-bourgeois students and the police. In Cagua, in the state of Aragua, twelve students attacked the police with Molotov cocktails during a demonstration against the constitutional amendment. Similar events unfolded in Cumana (Sucre), Mérida and Maturín (Monagas). The worst case was in the state of Táchira, where fascist gangs have promoted violence on the streets for the last two weeks.

On January 17, six Colombian paramilitaries were detained in Maracay, Aragua, carrying weapons, grenades and two kilograms of explosives. On January 27, another 31 Colombians were arrested, accused of being linked to a paramilitary group. A similar case occurred in El Vigia, in the state of Mérida, when four members of the Colombian fascist paramilitary-group "The Block of Black Eagles" were captured with a huge amount of arms, explosives, grenades and maps with detailed plans for terrorist acts. All of this clearly shows the desperation of the opposition who knew that it could not win, and thus tried all sorts of tricks to block the referendum and create a mood of instability and chaos.

However, there are also other dangers inherent in the present situation. The referendum results showed a big majority for the revolution, but we also witnessed a mobilisation on part of the counter-revolution. In fact, the 5 million votes obtained for the "NO" vote means that the opposition vote has grown by 700,000 as compared to the November elections. Proportionally, the opposition gained some terrain. While the difference between revolution and counter-revolution in November was 58% to 41%, in this referendum it was 54%, to 45%.

This is clearly a warning which must be taken seriously. What it shows is the extreme polarisation in Venezuelan society between left and right, revolution and counter-revolution. Some people will say that the government needs "moderation" and "dialogue" in order to build a bridge between these opposing sides.

But in order to win over the hesitating elements to the revolutionary line, what is needed is not "moderation". On the contrary: what is needed is bold and decisive action! The reason why some layers of the masses did not vote or voted "N" is becauset they are tired of the slow pace of the revolution. They are growing weary of empty phrases about the wonders of Socialism, while their fundamental problems still remain unsoved.

Contrary to what is being advocated by some reformist elements in Venezuela, the international crisis of Capitalism will have an effect on Venezuela. In fact, the impact is already being felt. In just half a year, the price per barrel of oil has gone from $147 to less than $40. This has completely undermined the country's economy. Prices of other raw materials, such as aluminium and steel, which Venezuela produces en masse, have also dropped dramatically.

This cannot but undermine the conquests of the revolution. PDVSA (the national oil company), which finances various social projects, has already announced a 40% cut-back in this year's budget. Inflation has also soared. It is currently at nearly 30%, but food prices in Caracas have risen by 50% in a single year.

This creates severe problems for thousands of working class families who cannot make ends meet. If they are not solved, it will put the the social support of the revolution in grave danger. The main problem is that the Venezuelan economy still is capitalist, and must therefore obey the basic laws of the market. To break this pattern it is necessary to introduce a Socialist plan to re-activate the country's produtive capacity and ensure the economy runs smoothly. But to do this, a break with the economic power of the oligarchy, which still holds the main levers of the economy in its hands, is necessary.

"An idea whose time has come"

In his victory speech at the People's Balcony in the Miraflores Palace, Chávez said that the 6 million who voted "YES" voted for Socialism. This is a thousand times correct. But now "Socialism" cannot remain a mere word; it must be built in practice. In spite of the impressive victory of the referendum, the revolution is still not irreversible. The growth of the opposition and the fact more than one million who voted Chávez in 2006 did not vote at all this time are clearly signs of danger. Taken together with the loss of several strategic regions in the November elections,  the alarm bells should be ringing.

On election day, Chávez sent out a communiqué. In this press release he quoted Victor Hugo: "You cannot stop an idea whose time has come". Again, this is completely correct. But we must add one thing: this idea is the Socialist Revolution. You cannot stop the revolution once it is set in motion! The revolution cannot stop half-way! Now more than ever, the question is the following: either the revolution moves forward to destroy the economic power of the bourgoisie and imperialism or it will go under in the most terrible defeat. It is on this question that the fate of the Venezuelan Revolution will be decided.