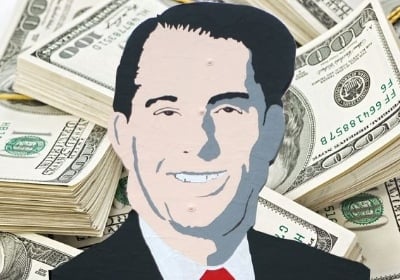 In early 2011, the eyes of the world were focused on two very different places: hot and arid Egypt, and cold and snowy Wisconsin. What was it that linked these two places? Nothing more and nothing less than the class struggle which, like the capitalist crisis, is worldwide in nature.

In Egypt, a hated, anti-labor, anti-democratic, pro-big money tyrant was thrown out on his ear by a revolutionary uprising of the masses, centered on the occupation of Tahrir Square in Cairo. In Wisconsin, hundreds of thousands of young people and workers followed suit, occupying the state capitol in Madison for weeks on end to protest their own anti-labor, anti-democratic, pro-big money tyrant and his Draconian anti-union laws. This was an inspiring movement that energized workers’ struggles around the country and worldwide.

Hosni Mubarak was overthrown, but his regime remained in place. The Egyptian workers and youth are now entering a new phase of struggle to sweep the old state and economic apparatus aside as well: the Egyptian revolution is far from over. But in Wisconsin, the tyrant and his laws have not yet been overturned—although that struggle is also far from over.

In reality, the battle against Walker was lost last year. If labor had mobilized its full power then, beginning with the public sector and spreading it to the private sector, it could have spread the struggle nationally. Not only did the union tops not set a date and organize a statewide general strike back in February and March of 2011—which could have stopped the legislation in its tracks—they squandered the enormous momentum and pro-union sentiment that roused people across the country to support the cause of Wisconsin’s workers.

The labor leaders could have explained to all workers that if the Wisconsin public sector workers were defeated, they would be next! They could have explained that instead of accepting a “race to the bottom,” if we unite and fight together, we can not only defend union workers’ wages and benefits, but extend them to all workers. “Make the rich pay for the crisis!” is a message that would have resonated strongly with the working class majority, both public sector and private, union and nonunion.

Instead, not only did the labor leaders allow the movement to be demobilized into the recall, but they accepted concessions. While opposing the “extreme” measures of Walker’s effective abolishment of public sector union rights, they accepted and even bent over backwards to offer givebacks. The message this approach sent was the following: “take back our hard-fought wages and benefits if you must, but let us keep our unions and our dues base.” How can the union leaders expect to inspire the broader working class to support their struggle if they give up the wages and benefits of their own workers without even putting up a fight?

And when it came time for the recall, instead of charting an independent course and keeping the public’s attention firmly focused on the real issues, they backed a candidate who played strictly to the mythological “center,” a candidate who openly said that he too would impose cuts on labor—only not as aggressively or crassly as the Republicans.

No wonder so many were left in the cold. No wonder so many union voters (36%) and even many Democrats (20%) voted for Walker, swayed by the enormous resources poured into Walker’s campaign and his message of “conservative social values.”

The right wing understood the importance of this election, and acted accordingly. This was the most expensive campaign in Wisconsin history. Walker raised $30.5 million, ⅔ of which came from rich supporters outside the state, while Tom Barrett raised just over a tenth of that, $3.9 million, with only ¼ of that coming from out of state. The stakes were high and the “line in the sand” was drawn.

But organized labor’s leaders did not fully grasp the magnitude of the challenge—even though thousands in the rank-and-file were willing to fight tooth-and-nail against the status quo. By falling into the game of the Democrats and by not harnessing the unions’ full potential, they lost a historic opportunity to energize the labor movement nationwide.

The role of the Democrats

Through a series of well-calculated and cynical maneuvers, the Democratic Party succeeded in defusing the mobilizations and channeling the anger and frustration into a recall election. Using their classic “bait-and-switch” tactic, the Democrats teased union workers and youth with the possibility of a “progressive” gubernatorial challenge to Walker. The choice was eventually narrowed to Kathleen Falk, former County Executive of Dane County (where Madison is located), and Tom Barrett, current Mayor of Milwaukee.

Both of these candidates had “taken on” the unions in their respective constituencies, and are no friends of labor.  In the end, Barrett was selected—a “pragmatic” politician (read: pro-cuts and pro-austerity). Never mind that Barrett had already lost to Walker in 2010. Never mind that he explicitly refused to talk about the central issue in the recall: the question of collective bargaining rights for public sector workers.

That’s precisely why the uninspiring, anti-labor Barrett was the Democratic Party leadership’s candidate of choice. He was a man they could count on to make the same kinds of “hard decisions” Obama has made when it comes to jobs, healthcare, education, and the environment—decisions that invariably benefit the 1% at the expense of the majority. A man who would not let things “get out of hand” as they did in February 2011.

And if he lost, so much the better, as the residual anti-Walker anger could be cynically harnessed in November to ensure the real prize: keeping the presidency of the United States. In this manner, expectations were methodically whittled down, and the process stretched out for so long that by the time the election came around, the electricity of the mass protest movement had been sucked out of the air.

CNN’s headline summed it up well: “Walker’s Wisconsin Win Big Blow To Unions, Smaller One To Obama.” Obama could afford to lose this one. It was the “lesser evil.” Better that than having an engaged and energized working class making unrealizable demands on a big business party. That’s why his entire input into the “life and death” struggle between organized labor and the Koch brothers and co. was a Tweet on election night and word of support when Barrett was initially named the candidate.

The last thing the Democratic leadership wanted was for one of their candidates to be swept into power on the back of a mass mobilization of workers and the big expectations that would mean. The Democrats have no better solution than the Republicans when it comes to creating the millions of quality jobs we need or for providing universal health care and education. These things are simply not possible as long as Wall Street and its relentless drive for profits calls the shots. The Democratic Party is organically incapable of attacking the interests of big business: they are not about to bite the hand that feeds them!

Labor can fight back and win!

The election result will be used as a battering ram against organized labor—as “proof” that Americans are shifting to the right, that “greedy” workers are indeed the cause of the crisis, and that the “majority” recognizes this “pragmatic” reality. More governors will be emboldened to attempt to ram through “Right to Work” legislation. We will be told that there is no alternative to austerity and concessions, and furthermore, that there is no point in expending so much energy protesting and collecting signatures, as nothing changes anyway.

Nothing could be further from the truth. By organizing and fighting back, we can win! But fighting back is not enough: we need a winning strategy as well. Things could have turned out very differently. Unfortunately, the labor leaders’ approach made this outcome not only possible, but probable.

The vast resources poured into Walker’s campaign are no excuse for his victory. He is among the most hated men in America and his administration is under investigation for corruption. Scott Walker is the dictionary definition of mediocrity, and he doesn’t have an original idea in his brain. More importantly, the workers have something far more valuable than money: we have the vast majority of society. Walker was more than beatable. It was the labor leaders’ policies that led us to this result.

Instead of making excuses, labor must learn from this experience and avoid the same mistakes in the future. Richard Trumka and the rest of the leaders of the AFL-CIO and Change to Win can turn this situation around. The potential for independent labor politics is enormous. Fully 50% of those polled in Wisconsin said they have a negative view of both major parties.

The lesson of Wisconsin is that labor can rely only on our own forces and resources to fight against the attacks of big business. We can’t entrust the lives and livelihoods of the majority of this country to a corporate party beholden to the 1%.

Walker and his ilk can be beaten. Labor is a powerful force, but with the present policies of the leaders, battle after battle is being lost. If we mobilize labor’s vast resources and millions of members to run candidates of our own and to build a labor party, we would no longer be fighting the bosses with one hand tied behind our backs.

As in Egypt, the class war in Wisconsin and the United States is far from over. It will be fought (and won!) on the streets, in the workplace, and with a labor party based on the unions. There are no shortcuts.

Originally published by the Campaign for a Mass Party of Labor. Click here for more information and to join the CMPL.