We Need a Working Class Program for the Economic Crisis 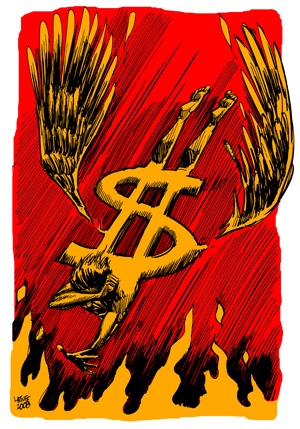 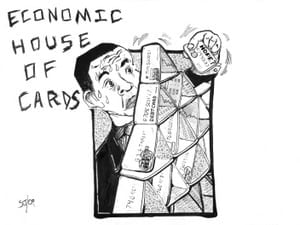 The economic crisis has now dragged on for months and there is no end in sight for U.S. workers. Months of “solutions” by both Republicans and Democrats have done absolutely nothing to revive the economy or stop the job losses, home foreclosures and bankruptcies, and still the wars in Iraq and Afghanistan drag on. Trillions of dollars have been thrown into a financial black hole as corporate CEOs continue to make out like bandits on the public dime. The U.S. deficit is forecast to hit a mind-blowing $1.8 trillion this year, with projected deficits of an additional trillion dollars every year for the next decade. This would put the deficit at nearly 5 percent of GDP, a nearly intolerable drag on the economy. The danger of stagflation, a mix of rising prices and slowed economic growth, is inherent in the situation.

Worst of all, we workers, our children and grand children, will have to pay all of this debt back – with interest – and will have received nothing of any real substance in return. No single-payer universal health care, no free education for all, no guarantee of employment at a living wage with decent benefits and conditions, no rebuilding of the Gulf Coast, the inner cities, our crumbling roads, bridges and other infrastructure. In fact, this is a recipe for a permanent and continued worsening of our conditions of life.

A record 742,000 jobs were lost in March alone, on top of 706,000 lost in February. The whole of American society is being “retooled” as a result of this crisis. Millions of jobs are simply not coming back. Ever. Already, tent city shanty towns of the newly homeless have popped up in Fresno, California and a dozen other cities. This is reminiscent of the “Hoovervilles” during the Great Depression, as depicted in The Grapes of Wrath.

The once mighty auto industry, which has been ruined by the greed and short-sightedness of the CEOs, is being made an example of, and once again, it is the workers who will pay the price. GM and Chrysler are receiving billions in public dollars, but only on condition that the United Auto Workers union effectively cease to exist as a tool to defend the workers’ interests. Obama has personally demanded more concessions from the union. As he put it: “We think we can have a successful U.S. auto industry. But it’s got to be one that’s realistically designed to weather this storm and to emerge – at the other end – much more lean, mean and competitive than it currently is.”

In other words, UAW workers’ wages, conditions, benefits and job security are to be driven down to the level of non-union auto workers. Far from being a socialist solution, which would mean nationalization under workers’ democratic control at union wages and benefits, this kind of government intervention is exposes the myth of the “worker friendly” Democrats!

As for the scandal over the AIG bonuses, what did they expect when they gave public money to the same handful of greedy profiteers that speculated the company into the ground in the first place? The real aim of Obama and other officials’ “outrage” was to focus public anger on a handful of CEOs instead of on the true cause of the crisis.

Treasury Secretary Timothy Geithner touched on the core truth of the situation when he said: “The market will not solve this” (while at the same time announcing billions more to bailout the banks). The fundamental reason these “solutions” haven’t worked is because they seek to resolve the crisis – which is at root a crisis of the capitalist system – within the limits of that very same system. It’s like trying to lift a manhole cover you’re standing on – it simply can’t be done.

Simply put, Obama cannot “solve” the crisis. His unenviable job is to try to keep the workers’ reaction within safe limits, to help establish new, lower expectations for what is possible under capitalism. Even the modest gains of the past are being ripped away from us, let alone any real improvement for the majority. The “American Dream” is well and truly over.

The Republicans are already positioning themselves to benefit from the inevitable backlash Obama will face once his honeymoon is over. They will try to cynically use the crisis to get back into power. This is no solution! Like the Democrats, the Republicans have nothing to offer working people. The only way forward is for the unions to break immediately with the Democrats and start building a political alternative for workers: a mass party of labor based on the unions, with a militant program to fight for workers’ interests. Only by fighting for the nationalization of the biggest banks and corporations, to be run under democratic workers’ control, can we harness the resources of society in the interests of all.

The Republic factory occupation, along with dozens of similar occupations around the world show the way forward. The capitalists have proved their complete inability to run their own system. If they can’t run society, we will!

Some cynical commentators compare the crisis to a forest fire, which clears out the dead branches, brambles, young saplings and old trees that can’t survive the fire. In this manner, the ground is laid for a renewal and blossoming of the forest. This may be the life cycle of a forest, but millions of workers and the poor are not dead wood! How much longer must we allow the impersonal “business cycle” to ruin the lives of millions?

The strategists of capital are worried that the social effects of the crisis could get “out of control.” U.N. Secretary-General Ban Ki-moon, whose task is to keep diplomatic relations running as smoothly as possible within the limits of capitalism, had this to say: “I am concerned that if we do not properly address this issue swiftly, this may develop rather alarmingly into political instability, into a political crisis.”

This is already happening in one country after another. However, there is no automatic, “final crisis” of capitalism. The system will eventually recover from the current crisis if we allow it to continue. It is up to us to do end this system once and for all.

Enough is enough! We say, make the rich pay for their crisis! We need a real solution, one that addresses the needs of the working class majority of this country. We propose the following program as a response to the economic crisis. If you agree with and want to fight for this perspective, join the Workers International League!

What the WIL Proposes