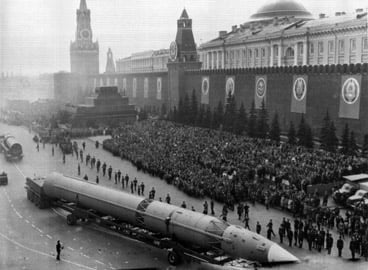 Ah, but the Soviet Union collapsed. Doesn’t that prove that socialism has failed? Yes, the Soviet Union collapsed after decades of bureaucratic and totalitarian rule, which completely negated the regime of workers’ democracy established in 1917. As early as 1936, Leon Trotsky predicted that the Stalinist bureaucracy that usurped power after Lenin’s death, would not be satisfied with its legal and illegal privileges, but would inevitably strive to replace the nationalized planned economy by privately owned monopolies. The capitalist counter-revolution in Russia, however, offers no way forward to the peoples of the former U.S.S.R.. It has been accompanied by a horrific collapse of the Russian economy, living standards and culture, as Trotsky predicted. If there is a country in the world where capitalism stands condemned, that country is Russia.

The prolongation of senile capitalism threatens the future of human culture, civilization, democracy, perhaps even the survival of humanity itself. The world is crying out for a fundamental social and economic transformation. The only hope for humanity consists in the radical abolition of capitalism and the establishment of a harmonious system of production and distribution based on the common ownership of the means of production under democratic workers’ control and administration.

The enormous potential of a nationalized planned economy was demonstrated by the Soviet Union, before, during and in the first 25 years after the Second World War. Despite all the efforts of the bourgeoisie and its hired prostitutes to deny it, the fact is that the U.S.S.R. (and later China) showed that it is possible to run an economy without private capitalists, bankers, speculators and landlords, and that such an economy can obtain spectacular results.

The future socialist planned economy of the U.S.A. will not be based on backwardness, as was the regime established by the Bolshevik Party of Lenin and Trotsky in November 1917. It will be as different from Russia as computer science is from the wooden plough. American socialism from the very beginning will draw on the colossal advances of industry, science and technology, which will become the servants of human needs, not the slaves of the profit motive. Once the vast productive capacity of the U.S.A. is organized on the basis of a rational plan, the sky will be the limit.

This is not just a theoretical assertion. It has already been proved in practice, and not only in Russia. As we have seen, during the Second World War, when elements of a planned economy and state control were introduced in the U.S.A., the economy grew rapidly and unemployment all but disappeared. That gives us just a glimpse of the tremendous potential that a socialist planned economy in America would unleash. Of course, this was not socialism. The basic levers of the economy remained in the hands of private capitalists. Real planning is not possible under capitalism. And the nationalized industries were run by bureaucrats. But despite these limitations, even these elements of a planned economy gave serious results for a time.

The elements of planning, even on a capitalist basis, gave better results than the free-for-all of the market economy. Just imagine the results that would be possible in a real socialist planned economy in which the benefits of a central plan would be combined with the democratic control and administration of the working people themselves. On the basis of a modern, technologically advanced economy, rational planning will spur production to an unprecedented level.

In every great revolution we see more or less clearly defined stages, which recur with a strange regularity and with uncanny similarity. The initial stage, which corresponds with the first awakening of the masses and the growth of their self-awareness, is characterized by a mood of euphoria and a spirit of unity. But gradually this illusory unity dissipates and there is a growing division between the more revolutionary elements and the more moderate party. The period of revolutionary ascent is marked by a movement to the left, in which the more revolutionary wing and the most audacious leaders gain the upper hand and sweep all before them.

However, as Trotsky explains, revolution is a powerful devourer of human energies. As the masses become exhausted by their exertions and sink into passivity, the conservative wing tends to regain control and elbow the revolutionaries to one side. This happened in every bourgeois revolution in history, and corresponds to the inevitable dialectic of such a revolution. The Declaration of Independence stated that all men were born free, and proclaimed the equality of all men as “self-evident.” These were ideals worth fighting and dying for. But once the British had been defeated, the American bourgeoisie soon made it clear that all men were not equal, and that they intended to rule and exploit the people, just as the British had done before them.