What Is to Be Done About Amazon?

Amazon has become the poster boy for the absurd contradictions and grotesque inequalities of capitalism, as its appalling working conditions are juxtaposed with CEO Jeff Bezos’s status as the world’s richest man ($164.7 billion and counting). Having recently followed Apple in reaching a market value of over $1 trillion, Amazon has amassed a level of wealth and consolidation that is at times difficult to comprehend.

Readers may find it useful to scale Amazon figures and other capitalism-related statistics in terms of seconds—with one million seconds lasting about 12 days, one billion seconds 31.7 years, and one trillion seconds 31,709.8 years. Using this comparison, Jeff Bezos could spend $86,400 every day for 5,221 years. He makes more money in 10 seconds than the median Amazon worker makes in one year. “The only way that I can see to deploy this much financial resource is by converting my Amazon winnings into space travel,” Bezos said in an interview in May.

Having started as a mere online bookseller just a couple decades ago, Amazon has since expanded into every industry it can, from day-to-day consumer products to grocery services to cloud computing to publishing and film production, consistently surprising bourgeois analysts. Forbes Magazine gushes that “No industry is Amazon proof . . . Amazon controls less than 6% of all retail sales globally. What prevents Amazon from eventually controlling 20% or even 40% or more of all retail globally? Answer: Nothing . . . Amazon is truly the unstoppable force.”

The world’s richest man. With a fortune of over $164.7 billion, Amazon CEO Bezos makes more money in 10 seconds than the median Amazon worker makes in one year.

With its 2017 purchase of Whole Foods, Amazon took the next step in its steady encroachment into daily life, transitioning from a “virtual” company whose workers are hidden from society’s view to a company with a palpable presence in society. For many, the notorious blue “Prime members save even more” signs introduced at Whole Foods this past summer was the final straw, giving rise the widespread sentiment that Amazon is “taking over the world” and to calls for a “boycott” of the company.

Set to announce the location of its second headquarters by the end of 2018, Amazon demonstrated its bullying power in June, teaming up with Starbucks and other business interests to force the Seattle City Council to immediately repeal a meager head tax—or, as Amazon put it, a “tax on job creation”—after already pressuring the council into watering down the initial proposal the previous month. Despite these strong-arm tactics, cities across North America have bent over backward offering tax breaks and other perks to entice Amazon to set up shop in their backyard.

HQ2 will indeed bring high-paying jobs for those at the top—but also low wages and nerve-shattering working conditions for the far more numerous “grunts” the company’s profits depend on. Not only that, but whichever city is chosen will surely suffer from the surge in housing prices and homelessness with which Seattle residents are all too familiar. In an attempt to stave off discontent, Amazon has cynically raised the minimum wage for its US and UK workers to $15 per hour, but this wage is far from livable and does nothing to address the terrible working conditions or anti-unionization efforts the company has long practiced.

Many portray Bezos’s wealth and business practices as the product of a particularly acute form of “greed,” even appealing to him on moral grounds to simply have a change of heart and pay his workers a living wage. But ultimately, Amazon is just another company adhering to the norms imposed on it by the nature of capitalism, and Bezos is only following in the well-worn footsteps of the Rockefellers and Carnegies of yesteryear. As long as capitalist economic relations are allowed to continue, such people will continue to infest society.

Bernie Sanders has spearheaded the liberal opposition to the excesses of Amazon, publicizing instances of timed bathroom breaks, poor lighting and climate control, bans on social interaction in Amazon warehouses, as well as instances of homeless Amazon workers, often sleeping in the parking lots of the warehouses. Along with California representative Ro Khanna, Sanders introduced the so-called Bezos Act on September 5. The bill aims to end “corporate welfare,” and would tax companies for every dollar their employees receive in public assistance, citing the thousands of workers at Amazon and other companies that are forced to rely on federal subsidies due to unlivable wages. In the absence of a mass working-class socialist party and mobilized labor movement, such a bill is virtually doomed to failure. But even if it did pass, its effects would surely be less dramatic than intended, as Amazon and other major companies would fight tooth and nail to water down or repeal such a tax—if they aren’t able to nip it in the bud in the first place, as they did in Seattle.

Bernie Sanders has spearheaded the liberal opposition to the excesses of Amazon, but in the absence of a mass working-class socialist party such efforts are doomed to failure.

The extent of Amazon’s market domination has even given rise to significant debates in bourgeois law, starting with a 2017 Yale Law Journal article by law student Lina Khan, arguing that the focus within antitrust law on “consumer welfare” has allowed Amazon to become a threat to competition, while steering clear of antitrust scrutiny. Bourgeois law and economics declare monopolies to be instances of “market failure” and liberals propose that the solution is to somehow curb such “anticompetitive behavior.” Others call for “breaking up” Amazon.

Marxists, on the other hand, explain that the level of consolidation and monopolization we see today—not just with Amazon but in general—is merely the inevitable result of the logic of capitalism. Breaking up a company like Amazon would only temporarily set back the unavoidable process of reconsolidation of the means of production into new monopolies. Ironically, however, through the very mechanism of market competition, the capitalists have unwittingly laid the infrastructural foundations for socialism.

As Engels explained in Socialism: Utopian and Scientific, the solution to the conflict of capitalist relations “can only consist in the practical recognition of the social nature of the modern forces of production, and therefore in the harmonizing with the socialized character of the means of production. And this can only come about by society openly and directly taking possession of the productive forces which have outgrown all control, except that of society as a whole.”

The very existence of Amazon shows the colossal potential for economic planning, albeit in a distorted way. With 2017 net sales revenue of $177.9 billion, Amazon coordinates a network of production and distribution much larger than those of most countries (if it were its own country, it would be the world’s 55th richest). As any Amazon warehouse worker can attest to, the company does not rely on the good graces of the “invisible hand” of the market to ensure that its internal operations run efficiently. In effect, under capitalism, we have a limited form of planned production within individual companies—but anarchic production for society in general. 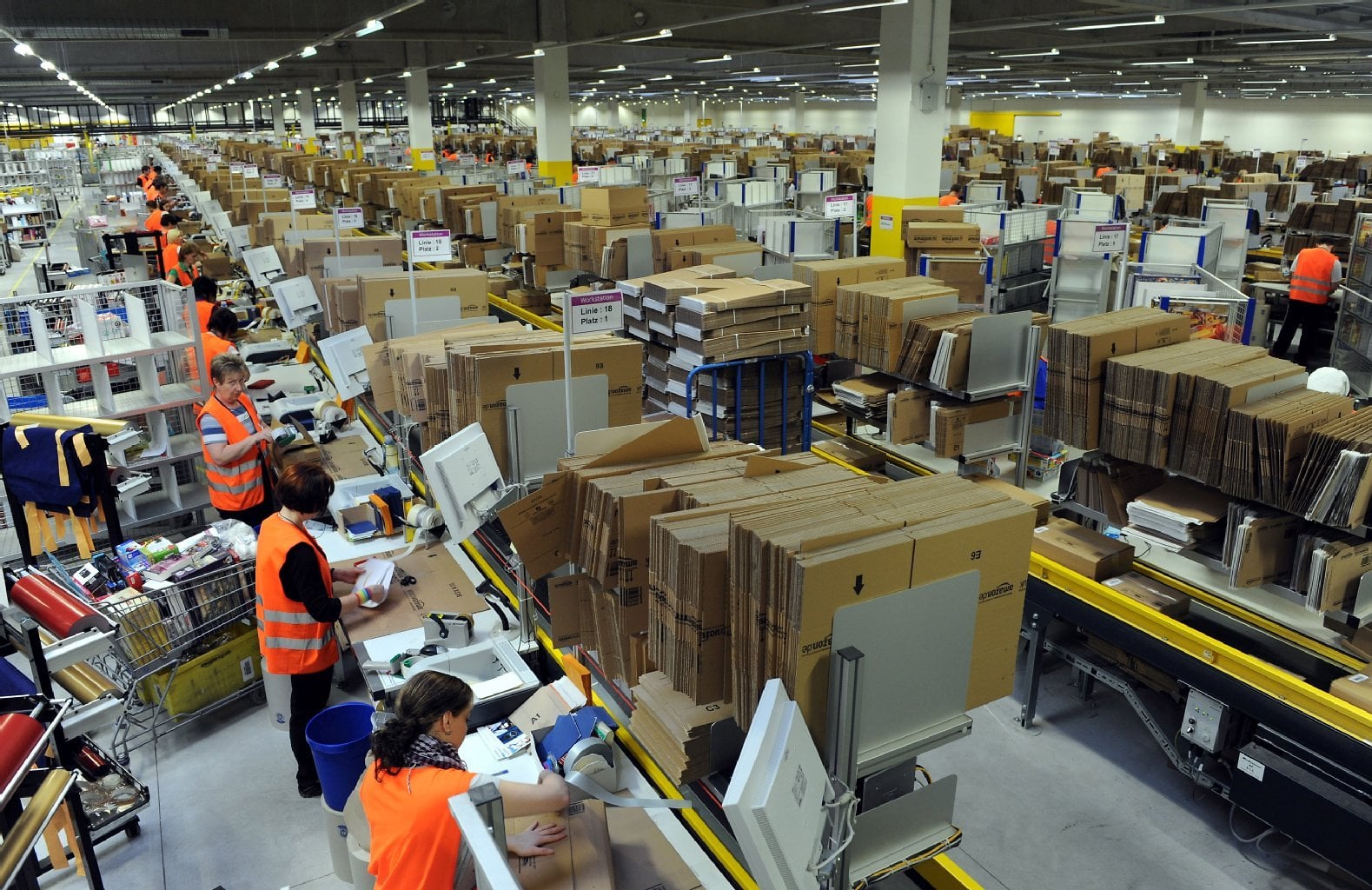 As any Amazon warehouse worker can attest to, the company does not rely on the good graces of the “invisible hand” of the market to ensure that its internal operations run efficiently.

Liberated from the confines of the profit motive and the nation-state, society could apply the science of Amazon’s method to operate colossal supply chains, distribution networks, and socialized production. I.e., we could develop an efficient and rational economic plan with an entirely different motive: human need. Capitalism has become a fetter on development such that advances in automation technologies function as “job killers” rather than liberatory time-savers. Only the working class can continue to develop the means of production and the infrastructure necessary to provide comfortable living standards for all—including the billions immersed in misery in countries ravaged by capitalism.

While many understandably want to “do something now” about the problem of Amazon, there is no quick fix—but this doesn’t mean there isn’t a solution. The working class has the power to shut down production and the movement of goods. Fighting to unionize Amazon workers is a crucial step in this direction. But to seriously take on a company like Amazon will require even broader broad working-class action, involving the longshore, trucking, airline, and delivery workers, not to mention the manufacturing, communications, design, electrical, tech workers, and everyone else the company depends on. And not only workers in the US, but workers around the world. By uniting and fighting along these lines, some important concessions could be won. But ultimately, we need to set our sights on the only full and lasting solution—the revolutionary socialist transformation of society.

Fighting to unionize Amazon workers is a crucial step in this direction. But to seriously take on a company like Amazon will require even broader broad working-class action.

The ongoing crisis of capitalism will force the issue, perhaps much sooner than anyone thinks. Organized labor has a key role to play, and though the current leadership will move might and main to avoid putting up such a fight, new, rank-and-file class fighters will replace the current leadership if the latter continues its policy of collaboration with the capitalists. A mass workers’ party based on the unions will also be a vital factor in drawing wide layers of the working class into solidarity and strike action, helping to ensure that such actions are concerted, conscious, and coordinated. But until the labor movement makes a decisive break with the Democratic Party, the working class will be limited to fighting “with one arm tied behind its back.”

Instead of trying to take society back to an earlier phase of capitalism, the IMT proposes that we move society forward: by establishing a workers’ government that would nationalize the top 500 corporations, to be run democratically in the public interest. On this basis, we could in short order achieve a superabundance of goods and services to a degree that the founders of scientific socialism could not have dreamed of. With the massive untapped potential of modern productive methods and economic planning via the internet, we could eradicate material want once and for all, laying the basis for an entirely new society, in which for the first time in history, humans will genuinely be able to reach their full potential.