What Now for Wisconsin’s Struggle? 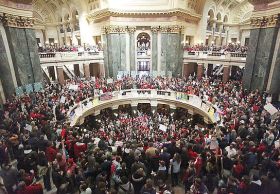 Over 100,000 turned out for the March 12th mega rally in Madison, a city of only 230,000. The mood was incredible. It was very moving to see the once-dormant mass of the population, including all sectors (nurses, teachers, firefighters, etc.), out on the streets, many for the first time in their lives, trying with fresh breath to find their voice.  On the basis of their own experience, workers’ consciousness is changing dramatically. Even former Republican voters were present to support the movement, which shows just how quickly this change can come.

The day began with the farmers coming out with their tractors. It was really incredible to see this traditionally conservative layer plaster their tractors with slogans like: “The revolution can begin with agriculture” and “Walker woke a sleeping giant: Walker’s bill = war on the workers.”

The contradictions in the movement in Madison, and its shortcomings, namely the lack of a class struggle leadership, was on full display during the rally. The initial protests at the capitol against the proposed legislation were not called by the official union leaderships, and they had since been trying to play catch-up with the movement.

The initial spontaneity of the movement left a political vacuum, which as always, must eventually be filled. The radicalism of the protest movement pushed the labor leadership quite far to the left, producing the South Central Federation of Labor resolution endorsing the idea of a statewide general strike and other similar declarations. However, despite the electrified mood, the March 12 rally marked the peak of the first phase of the movement, as the Democrats and the union leadership succeeded in reasserting control over the movement, at least for now.

Instead, they would prefer to channel the masses’ anger into the “safe” and “legal” recall campaigns, which will take at least nine months, and then to the 2012 election campaigns, where of course, all loyal workers will be expected to hold their noses and vote for the “lesser of the two evils” to come save the day from the big bad Republicans. Never mind that none of the Democrats have thus far even stated that they would repeal Walker’s bill if they win! And in the meantime, what are Wisconsin public sector workers supposed to do? A judge’s injunction has stayed implementation of the law for the time being, but that is no lasting solution.

Ultimately, the only way to permanently turn back the bill is for the unions to organize a real general strike of all public and private employees throughout the state. The question of the general strike is everywhere in Madison, discussed by literally everyone, whether they agree or disagree with it. This in itself shows a qualitative shift in the consciousness of the workers in the city and the state. But a general strike must be well planned, prepared and coordinated. It must be the product of open and democratic discussion by the workers themselves, reaching out to the broader community, and must have near-total participation.

A well-prepared general strike would not be strictly bound by questions of legality. After all, the law is a sheet of paper reflecting the balance of forces in society at any given time. In the final analysis, real change in society is brought about by mass action in the factories, workplaces, schools, neighborhoods, barracks, and streets. Many workers instinctively understand this. However, the mood existing and the manifestation of this mood into something concrete are not one and the same thing. Currently, there exists a painful vacuum of bold and militant labor leadership in the city.

History shows that when previously politically inactive workers first awaken to political life, the first avenue they turn to is not this or that tiny radical group passing out bombastic flyers or the ones who scream their slogans at the highest volume, but rather, to their traditional mass organizations. In the case of the U.S., where we do not yet have a mass Labor party, this means to the unions.

The speakers at the closing rally were people that ordinary workers and young people look up to: the union leaders and, to a lesser extent, the Democrats, who for lack of a real alternative, are able to pose as “worker-friendly” though their policies are anything but. The Democrats are trying to pull a fast one on the workers. However, people are not stupid. On the basis of their experience of going through the “School of the Democrats,” these fresh recruits to the ranks of the class struggle will eventually draw the necessary lessons from these betrayals.

The lack of a viable left opposition in the unions is also a factor, allowing the current “business unionism” labor leaders to severely limit the parameters of discussion and action–for now. The CMPL has an important role to play in initiating and developing the discussion on what kind of political and labor leadership U.S. workers need and deserve.

The efforts to derail the energy of the movement into electoral channels must be combated with continued pressure from below for SCFL to follow through on its resolution to prepare a general strike. A date must be set and preparations begun immediately! The fight is not yet over! This must be combined with spreading the struggle nationally, with the leadership of the AFL-CIO, Change to Win, and the NEA at the forefront of a movement to demand that the federal government release $500 billion in funding to shore up state and local government budgets.

With tremendous pressure mounting already to yet again vote for the “lesser evil” Democrats, the need for a mass Party of Labor takes on even greater urgency, even if it is “fighting against the stream” at first, as many workers will want to get rid of the Republicans at all costs. That being said, despite the overwhelming enthusiasm for the “Fab 14,” the CMPL campaign was very well received, but is still seen as something abstract. If the union leadership gave a bold lead on this question, such a party could quickly gain mass support and dramatically transform U.S. politics forever.