The problem with a “free-market” solution to health care is that it kills 60 Americans every day. 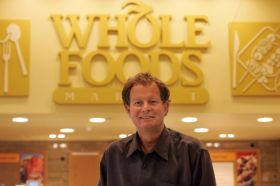 In an August 12 Wall Street Journal op-ed titled “The Whole Foods Alternative to ObamaCare,” John Mackey, CEO of Whole Foods Markets, joined former 2008 Republican presidential candidate and congressman from Texas Ron Paul in calling for a “free market” solution to health care reform based on “personal responsibility,” “choice,” and “freedom.”  In his editorial, Mackey calls for the de-regulation of the insurance industry and argues against supporters of health care for all as a human right.  He writes:

“Many promoters of health care reform believe that people have an intrinsic ethical right to health care — to equal access to doctors, medicines and hospitals… [H]ealth care is a service that we all need, but just like food and shelter, it is best provided through voluntary and mutually beneficial market exchanges…[T]his ‘right’ has never existed in America.”

Some may find it odd that a man who made his fortune promoting healthy living, locally-grown produce, “fair” trade and marketing an eco-friendly image should come out for a far-right wing approach to health care. However, a brief examination of his company’s history makes the picture a lot more clear.

Whole Foods is a trendy grocer with a known history of union busting, lobbying against the Employee Free Choice Act, freezing wages and bullying employees into high-deductible health savings accounts which place the bulk of the cost of health care on the workers themselves.  Whole Foods caters to upper-income clientele and offers a selection of high-end organic meat and produce well outside the budget of most American workers, including the company’s own employees.  Perhaps this is why John Mackey doesn’t seem to “get it.”

The comments from Whole Foods’ libertarian CEO have set off a chain reaction of protests outside of Whole Foods locations, online petitions and blogosphere replies, nationwide boycotts and even a tea-party-led counter “buycott,” throwing fuel on the fire that is the health care debate.

In a time of economic crisis, where we see an ever-increasing number of workers losing employer-provided benefits due to layoffs or are putting off seeking medical care for the same reasons, it should come as no surprise that Facebook’s “Boycott Whole Foods” group page gained over 33,000 members little more than a month after Mackey’s article first appeared.

This year has already been a roller coaster ride for Americans concerned with the ongoing debate over health care reform. Since early 2009, supporters of fundamental changes to the American health care system have witnessed single-payer reform taken “off the table” by congressional Democrats whose insurance industry-friendly, Obama-backed proposals have failed to inspire confidence or widespread support from the masses of workers and young people who mobilized to elect Obama last fall. Many have been appalled by the repeated reports in the corporate media of far-right groups disrupting town hall meetings and intimidating health care reform supporters — in some cases resorting to violence. Obama and his allies are retreating fast from their proposed “public option,” which appears less and less likely to make the final cut in any legislation to reach the president’s desk.

Facing a continuing economic crisis and the prospect of a jobless “recovery,” US workers just can’t afford to gamble with more of the same free market “solutions” to the problems we face. In recent years, many of these problems have been transformed from being a question of living standards to a question of survival.  Before the recession even began, over 37 million people in the US were living hungry and nearly 18,000 died each year because they did not have access to health care.

The total annual deaths attributed to the current health care system increases to over 80,000 when you count those who have purchased insurance but are either denied coverage or avoid necessary treatment due to financial hardship and high co-pays. This amounts to something like 60 people dying in the US every day because they could not afford health coverage. Add to those figures the mass of Americans who lost their jobs and homes in the past two years and Mr. Mackey’s market exchanges don’t look so “mutually beneficial” anymore.

Mackey’s Wall Street Journal op-ed attempts to make a case for the de-regulation of the health insurance industry, including an end to mandates on what insurance companies are required to cover.  He seems to hold the view that if insurance companies were allowed to sell any product they wanted to without restriction, and health insurance customers had more “choice,” then somehow, through the “magic” of the free market, we’d all be just hunky-dory.

Let’s give Mr. Mackey the benefit of the doubt and assume he has probably never had the experience of being denied coverage on a necessary or life-saving treatment because of pre-existing conditions or due to inability to pay out-of-pocket fees. Let’s also assume he’s never been dropped by an insurer because his poor health made him an unprofitable client. Any one of the millions of Americans who has a personal or family experience dealing with this monstrous, abusive and downright murderous for-profit health care system and the corporate “death panels” used by profit-driven insurers to drop sick patients could tell you that more de-regulation is the last thing we need!

The Obama Administration has lately been choosing words like “choice,” “competition” and “shared responsibility” to market its proposals for health insurance reform to the American public. This sounds more like the free market status quo than real “change.”  More and more Americans are beginning to smell a rat in the sweetheart deals between Obama and the Democrats and the big insurance, hospital and pharmaceutical companies, such as legal mandates forcing individuals to purchase insurance from private insurers or face fines.

It is now an evident fact that Obama’s proposals will not truly guarantee universal coverage and quality health care for all. No wonder more people are beginning to look to single-payer as the only reform that can guarantee quality affordable health care to all.

Since the vast majority of the Democratic Party has never gotten on board to support single-payer, as represented in Congressman John Conyers’ HR676 or Senator Bernie Sanders’ SB703, single-payer activists and supporters from organized labor, the health care profession, concerned citizens and outraged patients have begun to organize rallies for genuine health care reform in towns and major cities including Seattle, Portland, Salt Lake City, Denver, Minneapolis, Chicago, Louisville, Detroit and D.C.  At Labor Day parades across the country, activists from groups like Labor for Single-Payer and Health Care NOW! distributed literature and petitions.  The “Mad As Hell Doctors” launched a nationwide tour to spread the word about why we need single-payer, universal health care. Richard Trumka, recently elected as the new president of the AFL-CIO at the labor federation’s September convention, has come out solidly in support of single-payer. In fact, the AFL-CIO as a whole has unanimously now endorsed single-payer. It is time to put these words into action!

While these are promising signs that supporters of real health care reform are organizing and mobilizing, it is of great importance that we continue to raise the demand in our unions that Labor break with the Democrats and establish a mass party of Labor to fight for key demands like full-employment at a living wage, affordable quality housing, education, and the Employee Free Choice Act, as well as single-payer. These are basic demands the Democrats have proven time and time again they simply will not — and cannot — fight for. Labor must take the lead in these struggles by mobilizing the rank and file and building a party of its own to fight for the interests of the working class majority in this country.

The Democrats’ plan to subsidize private insurers and mandate purchase of insurance benefits is not a step toward a single-payer system for universal coverage. The far-right’s schemes to cut taxes for the rich, privatize Medicare, de-regulate the insurance industry and make access to health care a “personal responsibility” is also clearly a step backward.

John Mackey opened his editorial with a quote from the former-Conservative British Prime Minister, Maggie Thatcher. “The problem with socialism is that eventually you run out of other people’s money.” Of course, Mackey included this infamous quote because he, being quite financially secure himself after years of exploiting the labor of others, believes he is entitled not only to his ill-gotten gains but also to lecture the rest of us on why we shouldn’t have universal access to quality health care. That is, unless we can afford to shop at Mr. Mackey’s fancy grocery store!

The free market got us into this mess and no free market “solutions” can possibly get us out of it. The for-profit nature of our current health care system is what is really making people sick, not the majority of Americans Mr. Mackey implies are “irresponsible.” Proposals like Whole Foods’ free market alternative to health care reform will just make this nation even sicker! We need a working class solution to a problem that most adversely affects workers!