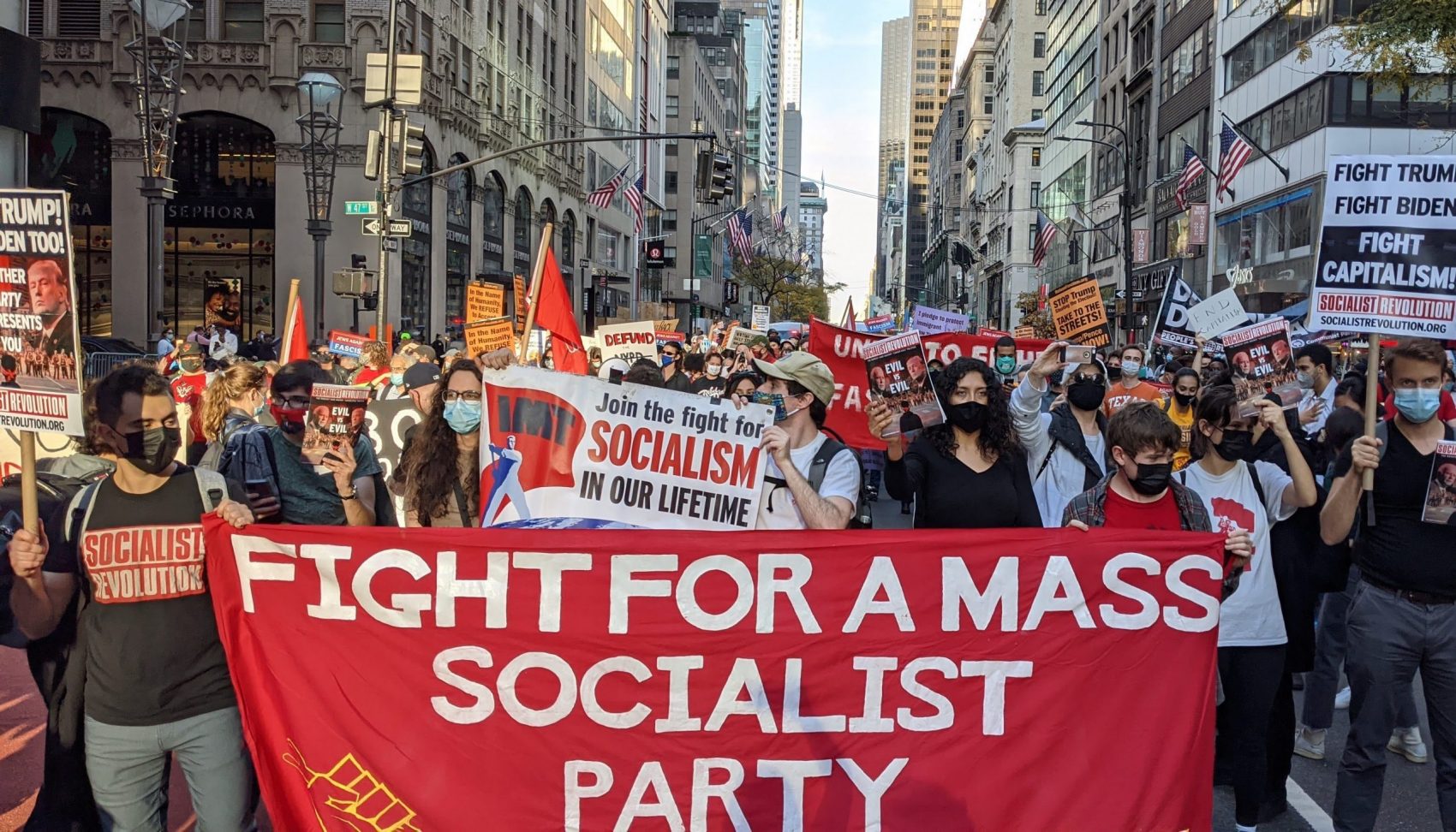 The world is on fire, and to deny it is dangerous. Ignoring the chaos and insanity that the crisis of capitalism brings us is also insanity. To diagnose the present situation of the capitalist system, one should look to the youth.

More and more young people are facing financial instability, drug abuse, homelessness, and violence, on top of the ever-more present climate crisis. US GDP has fallen for two quarters in a row. Another recession is at our doorstep, but this systemic crisis goes deeper than it was in 2008. To say that this is the greatest crisis humanity has ever faced… would be redundant. In my experience as a 20-year-old and a student, what is lacking is a way forward.

Doomerism is common amongst young people in this society, and even children are not immune to its ills. Suicide rates are high, and depression rates are even higher than that. The pragmatists that we are, we see no way out with what we have. This is not without reason; the pandemic, the war between NATO and Russia, and inflation (all caused by a general breakdown of the capitalist system) have only exacerbated these socio-economic problems.

In my experience with the International Marxist Tendency (IMT), the Marxists of Socialist Revolution, I’ve just begun to understand the world around me. With Marxism, I now have a clear way forward: the path to socialism. In an appeal to my peers, I’ve written a letter for all those who wish to fight for socialist revolution in our lifetimes.

There are decades where nothing happens; and there are weeks where decades happen.
—V.I. Lenin

What generation today can say it has been living in the midst of crisis since it was brought into this world? At the time of writing, the youth in America has undergone many so-called “once in a lifetime” events. How are we to understand this? We strongly desire, most of all, change. How can we affect change in a world that is ever more tumultuous? To answer these questions simply: we must struggle. We must struggle for change, and the struggle for the truth is perhaps more critical than ever.

For us young people, many of us students, struggle is the main quality of our lives. Atomized in our struggle for individual identity, we are told by many on the so-called “left” that the path to freedom simply requires validation and a “healthy environment.” Cynical Democrats campaign using a progressive face to tally votes when the real societal issues remain unresolved. For decades, the Democrats had promised to fight racism and defend abortion rights. What did they do after the murders of Jayland Walker, Breonna Taylor, or George Floyd? They increased police budgets.

In Democrat-majority cities, most of which were swept up in the BLM uprising, funding for police is higher than ever, despite the outrage against police brutality in 2020. The same Democrats who called for “police reform” in 2020 have now closed ranks to unilaterally increase funds to the police. It’s not just the question of police funding that the Democrats are united on. Virtually every promise Biden made in his 2020 campaign has vanished. This is because the interests of both parties, Democrat and Republican, are aligned.

Democratic politicians receive nearly as much campaign money from arms manufacturers as their Republican counterparts. Both parties have an interest in allowing death and destruction abroad, as well as domestically, to continue. In the crisis of capitalism, moreover, violence and war are inevitable. Despite massive support for systemic change, Biden would never go so far. The Inflation Reduction Act of 2022 is a shell of his promises in 2020.

What did they do after they failed to codify Roe v. Wade? They used this attack on women’s rights as an opportunity to whip up votes. To win change, they say, we must “vote blue no matter who.” Where has this gotten us? Now, millions of women are at risk of losing their access to abortion care—if they haven’t lost it already.

Unorganized in the struggle for bread, we are given scraps as inflation eats away at the wages of fast food workers, student workers, baristas, and interns. All this is taking place in the wealthiest country on Earth, where our bosses report record profits to their shareholders. What conclusion may one draw from this? Only revolutionary conclusions in this time of unprecedented crisis. The radicalization of young workers and students is proof of this claim. More young people than ever are gathering under the banner of revolutionary socialism. I am proud to say I am one of them.

Since joining the IMT, I have gained integral experience by applying a Marxist perspective, aligning my perceptions of reality with the material world, and recognizing that my personal and present struggles are due to the organic crisis of the system. Alongside my academic studies, I am also carrying out my own study of Marxist theory. The capitalist mode of production has long outlived its historical necessity. Similarly, the historical necessity for socialism is ripe!

The youth are already questioning the necessity of “profit incentives” and monopolistic entities. They have become acutely aware that only a handful of people profit from all this and that they care little about the majority’s future. With such economic instability and misfortune, many university students—assuming they can afford to pay rising tuition—see no future in which they can prosper. This attitude is reflected by the problems of mental health and nihilism that are more common in youth culture. Even with a college degree, most entry-level jobs can barely keep up with inflation, which is even worse for non-union jobs.

The world and its true nature, along with world events, can only be understood scientifically. To analyze phenomena, we must look beyond the surface. As Marxists, we base ourselves on the ideas of Marxism, of scientific socialism. As Karl Marx and Friedrich Engels explained, the exploitation and oppression of the working class, both young and old, is rooted in its relation to the means of production. This oppression takes many forms: on the basis of race, gender, nationality, etc., etc. Ending exploitation and oppression does not mean fighting this or that “ism,” but fighting all exploitation and oppression. A future without these ills lies in what we do right now, linking our struggles in solidarity to smash this oppressive system, the struggle to abolish capitalism.

The capitalist system can only be smashed through a collective and conscious effort—through revolution. Today’s youth have never known, and never will know, prosperity under capitalism; is it any wonder so many are turning to socialism and revolutionary conclusions? Thus, we come to the point of this letter.

After almost three years of continual blunders, lies, and naked exploitation by the ruling class, it is clear to me that the ground is being rapidly prepared for revolution. The objective reality will become apparent to the masses as they struggle to keep their wages up with inflation while recession looms. Through struggle, they will organize to defend the gains the American working class has made in previous periods. But the traditional organizations, unions, are not enough. If we are to see an end to the crisis of capitalism in our lifetimes, we must throw out the system entirely. There is no doubt in my mind that a revolution will occur in our lifetimes. But what is necessary for the socialist revolution to succeed is a mass workers’ party with a bold socialist program and an uncompromising critique of capitalism to end oppression and exploitation for the whole of humanity. Clearly, there is no such party yet in the USA, but something must be done now. An organization armed with Marxist theory and tactics must be built today to ensure that the future workers’ party can meet the challenges posed by history.

Currently, there is a crisis of leadership amongst the working class. In America, we have no workers’ party. Without proper leadership and a militant socialist program, the workers’ struggle will be doomed to defeat. The present work of the IMT is to build a revolutionary cadre organization of trained revolutionaries that can eventually lead the working class to victory. Accomplishing this will be monumental. Without an organization based on Marxist theory, it would be impossible.

The recent events in Sri Lanka only reinforce this assertion. Once the masses began to move, no force on the planet could stop them. Although they ultimately achieved their aim of kicking out the president, Gota Rajapaksa, the social antagonisms that brought them to his doorstep and into his palace are still present in their lives. The ruling class still attacks their wages and living conditions, and the workers have failed to wage a political struggle for power.

Only with a serious revolutionary leadership, trained in the ideas of Marxism, can the working class succeed in taking power. The IMT is the only organization that takes this task seriously. Not only are we serious, but we are bold and optimistic. I ask you to join us in the struggle to build that leadership.The most advanced youth are already at the forefront of this struggle!

It will not be long until the whole of the working class follows the youth in pursuit of a better world. As the Democrats continue to betray the American workers in their struggles against the present crisis, there will be calls for a class-independent party. The workers are already starting to move! Long live the IMT! Forward to a socialist future!