On the weekend of May 12th & 13th, over 30 members and guests gathered in St. Louis, Missouri for the National Congress of the Workers International League. As well as in-depth discussions on the economic, political and social perspectives for the world and the U.S., those present discussed the political and organizational tasks flowing from these perspectives.

This was the largest National Congress of the WIL so far, and the comrades attending reflected an energetic and vibrant Bolshevik organization – workers young and old, Teamsters, UAW and SEIU trade unionists, students, and immigrant workers. This was a truly national event with attendees from every region: New England, the Mid-Atlantic, the South, the West, Midwest, California and the Pacific Northwest. Above all, the meeting was characterized by a very high level of enthusiasm for the ideas of genuine Marxism, and a revolutionary commitment to building the WIL – right here in the “belly of the beast” of imperialism.

The  first day was opened with greetings from around the world, setting the tone for the working class internationalism of the discussions. The day’s discussion was devoted to world and U.S. Perspectives. The discussions on the world situation focused on Latin America and the Middle East – the two areas of the world where imperialism has met with the the strongest resistance of the masses in the recent period. Special attention was given to Latin America, with a focus on Venezuela, Ecuador, and Mexico. There were also contributions on the elections in France, the world economy, the situation in the Horn of Africa, Pakistan, China, and on Central Asia among others. The effects of the unstable and revolutionary world situation on the world’s largest economic power will be tremendous and are already evident. The discussion on U.S. Perspectives was led-off by WIL National Secretary John Peterson, and focused on the economy, the immigrant rights movement, the Labor movement, the Iraq War and the overall political situation (the U.S. Perspectives document will be published on our website shortly).

After the conclusion of the first day of the Congress on Saturday, the comrades headed to south St. Louis for an event organized by Hands Off Venezuela, featuring the campaign's International Secretary, Jorge Martin. The event, titled "The Latin American Revolution – Lessons for U.S. Workers" was held at the CAMP building on Cherokee Street and was attended by around 50 people. This was a lively event with many good questions for Jorge and a lot of interest in the Venezuelan Revolution and the ideas of socialism. Click here for a report.

The second day was focused on discussing the WIL’s organizational methods and goals, and the role and development of Socialist Appeal , the public face and collective organizer of the U.S. Marxists. There was a series of reports on the work the WIL has been engaged in during the past year – in the immigrant rights movement, in the trade unions, the anti-war movement and in building solidarity with the Venezuelan Revolution.

The Congress concluded with the singing of the Internationale. The comrades who gathered for this National Congress departed for their local branches full of confidence, elan and enthusiasm for the coming year and our historic task – the overthrow of capitalist barbarism and its replacement by a Socialist Federation of the Americas as part of a World Socialist Federation. Join us in the struggle for a better world! 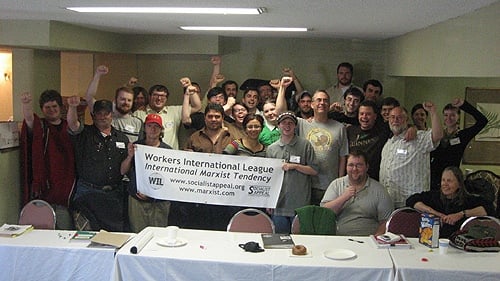