Women and Workers Under Attack in Ohio

The rust belt state of Ohio famously plays the role of a “swing state” come election time. The two bosses’ parties cynically appeal to the faded glory of the Midwest, and a bewildered working class, ravaged by the outsourcing of industry, vacillates between the supposedly different options of the capitalist status quo, hoping that this time union jobs and a stable society will be restored.

Indeed, much has been said about the white workers who abandoned the Democratic Party in droves this election cycle. Xenophobia, racism, and sexism have been the commonly identified factors that drove white voters to the arms of Trump, yet this talking point does nothing to explain why these very same voters previously voted for Obama’s “Hope and Change” eight years ago. Should we be content to believe that it is simply the ignorance and apathy of the workers that delivered the White House to Trump and Congress to the Republicans?

As Socialist Appeal has explained again and again, it was the rottenness of the establishment and the total lack of an alternative for workers’ interests in the general election that laid the basis for the presidency of Donald Trump. The most farsighted layers of the American working class have instinctively understood this, and the militant anti-Trump mood that his rippled across swathes of the nation’s youth has largely maintained an uncharitable attitude to Clinton and the DNC.

However, this nuance of the American class struggle seems to be lost on the strategists of the Republican Party. Recent moves by Ohio State Republicans provide two unseemly examples. In December, state legislators launched the Heartbeat Bill initiative. The proposal sought to ban abortion services at the six-week mark of pregnancy, a time when most women have only just become aware that they are pregnant.

This would create a public health crisis similar to the HIV outbreak that occurred across the state line in Pence’s Indiana. Women would be pulled backward into life-threatening “back alley abortions,” and the provocation would soon be compounded by the widening reaction against all women’s reproductive health at the local and national level.

Marxists have opposed all such patriarchal attacks since our earliest days in the country, when Antoinette Konikow, Communist Party member and future Trotskyist, joined her medical colleagues in pioneering the field of birth control and provided sexual education for a working class audience with the landmark pamphlet Voluntary Motherhood in 1923. As Konikow explained in 1941:

“Birth control is by no means a panacea for the evils of capitalism, but does offer some respite to workers during the period of bondage under capitalism. Workers, and particularly politically developed workers, should therefore protect against the onslaught of reactionaries, whatever progress has been made toward permitting the spread of birth control information. Unions with health centers should provide for birth control clinics administered by efficient physicians.”

Nearly a century after the work of Konikow and her contemporaries, women’s reproductive rights still sit in the crosshairs of reactionaries. The explanation for this can be found, not in abstract precepts of morality, but the continued existence of the capitalist system and the misogyny hardwired into it. The truth is, the Heartbeat Bill was a ghost risen from the realm of political impossibility. Ohio politicians discussed it in the past, but the idea was ultimately dismissed as unlikely to survive judicial challenges. But the unexpected rise of Donald Trump sent right-wing lawmakers across the country into a sprawling wave of reactionary confidence. They moved quickly to deliver their draconian anti-abortion law to the desk of Governor John Kasich.

During the Clinton years, John Kasich was on the hard right of his party. In 2016, he personified the impotent, poor moderate Republican establishment when Trump waltzed over his campaign as his doormat to the general election. True to form, the governor vetoed the bill and approved a “more moderate” twenty-week ban on abortion—a farcical compromise.

Ohio’s state legislature and governor also collaborated happily on a new law that bans cities in the state from raising their minimum wage beyond the state’s minimum $8.10 an hour. The bill was clearly designed to obstruct Cleveland’s prospective referendum on raising the minimum wage to $15, a vote forced on the city by the pressure of organized labor. 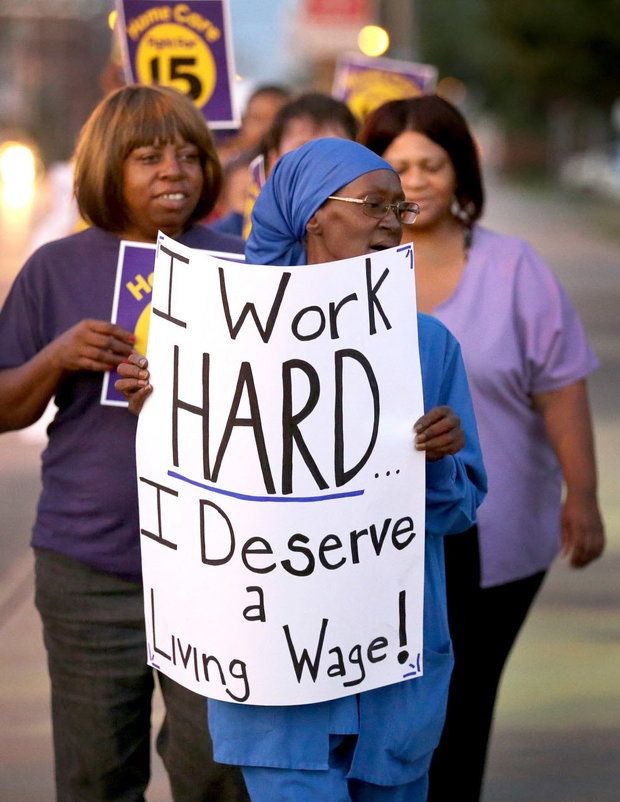 Post-Trump parallels can be found in the state of North Carolina, where Republicans made a controversial power grab in advance of losing the governorship, as well as the state of Kentucky, which passed “Right to Work” legislation, ending labor’s right to closed union shops.

The delusional shortsightedness of these legislative shopping sprees is evident. They have convinced themselves a state law will put an end to the fight for wage increases and that a “Right to Work” bill will solve the problem of pesky class struggle instead of having the effect of laying the ground for more militant and generalized union struggles in the future.

Workers in states like Ohio may be derided as “backwards,” but it is precisely in the allegedly backwards parts of the country that workers’ consciousness will catch up “with a bang.” We can confidently expect these regions to furnish some of the most explosive struggles of the rising American class struggle. Even in present day Ohio, facts tell a different story than ruling class confidence would suggest.

In 2011, a referendum vote decisively knocked down Kasich’s new anti-union legislation. In 2014, the police shootings of Tamir Rice and John Crawford III were met with nationwide revulsion. Also in 2013, independent labor candidates swept the local elections in Lorain County, providing a forewarning of the potential for a future mass labor party. In 2016, the leasing of Ohio police forces to put down the unrest at Standing Rock was met with a local backlash, and of course, the prospective Cleveland referendum on a higher minimum wage was produced by the labor movement’s campaign on this question.

In 2016, history passed its judgement on the likes of Kasich and Clinton. Only socialism beats Trump. Our task is to look forward to future developments and prepare a revolutionary socialist organization in advance. If you agree with our analysis, join us at the International Marxist Tendency and fight for a mass socialist party of the working class!