Charter Communications, a US-based telecommunications company better known as Spectrum in some areas, is a multibillion-dollar corporation providing television, internet, and telephone services in 41 states. Over the past year, Charter Spectrum has expanded its services to other states, including New York, by buying out Time Warner Cable (TWC). As noted in a recent Bloomberg article, TWC customer satisfaction had suffered immensely in the lead up to the Charter buyout. However, despite reports of “official” improvements in customer satisfaction rates since the transaction, Charter customers are not as satisfied as the numbers indicate. In fact, local news outlets have reported on the utter discontent that has resulted from the buyout.

Charter’s new customers immediately saw price increases in their cable packages. In Nebraska, customers were not only charged more but they were also missing channels that were previously included. Some locations have reported that the service is worse than before. When one customer called to look into how to have his service fixed and regain access to channels he previously had, he was informed that his monthly bill would be raised and he would have to pay an extra $24 to replace his old TWC cable box with a new Spectrum box.

Scandalously, Spectrum charges NY state customers $5 if they ask to talk to a customer service representative when dealing with their bill. Spectrum does offer ways to remedy billing issues online, but this assumes that customers have the appropriate computer and internet access, which is still not the case for many people, especially in poor, rural areas. This is just one more way that big corporations “nickel and dime” those least able to afford extra expenses. In addition, as rates have increased for everyone absorbed by Spectrum, the company seeks to avoid dealing with the storm of discontent they have stirred up.

Meanwhile, electrical workers have been on strike at Charter Spectrum/Time Warner Cable facilities in New York and New Jersey since March of 2017. Between 1,700 and 1,800 workers from IBEW Local 3 have been on strike for the past five months, in response to Charter’s proposition to switch workers over to a company 401(k) pension account and a substandard health care plan. Charter had over $70 billion to buy out Time Warner Cable, and over $16 million for the salary of their CEO, but has to make cuts to its workers’ benefits. As for the workers, they have stated their willingness to “fight to the end.”

Charter Spectrum provides service to over 25 million customers in 41 states, making it the second largest cable operator in the United States, behind Comcast, and the third-largest pay-TV operator behind Comcast and AT&T. Comcast provides service in 40 states, while AT&T provides combined internet and television service in 21 states, and television service alone in all states (DirecTV). The near-monopoly dominance of these companies in many areas means that millions of people have few if any other options to choose from. 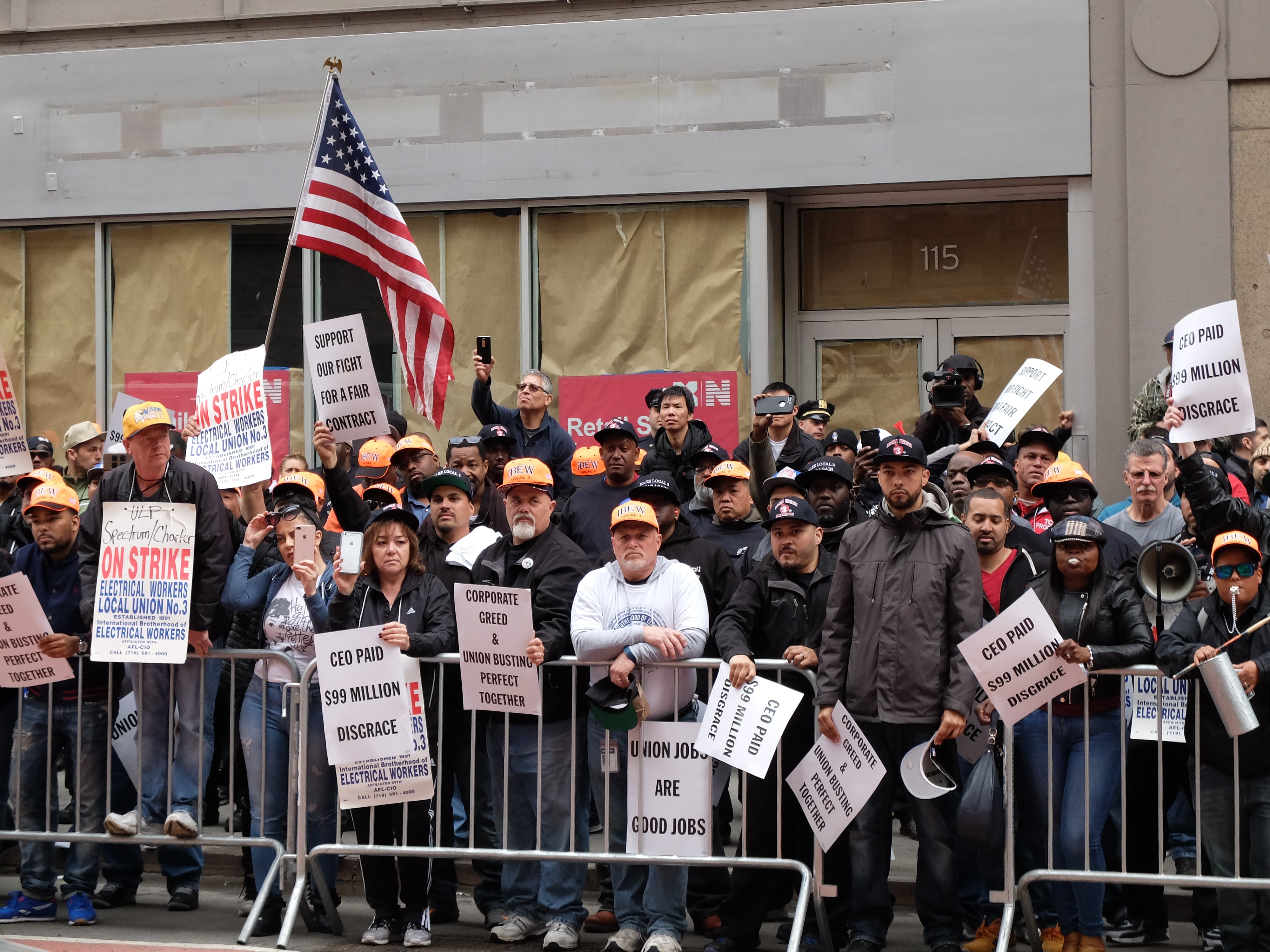 Beyond this, Charter has plans to launch an “alliance” with Comcast and Altice USA to more effectively dominate New York state, as well as launching its own wireless network for mobile use. This plan involves an agreement with Verizon, another massive telecommunications company in the US so that Charter can offer customers Verizon’s mobile network services, but under the Charter label.

It is clear that Charter has no interest in actually improving their “customers experience.” The company’s plan is the same as that of every other company under capitalism: to bleed workers dry—both those who work directly for it as well as its customers—in order to pocket more profits.

Society has the capability to guarantee everyone low-priced, if not free access to the best quality technology and services. The real issue lies in the fact that access is determined based on profitability, instead of need. As we have seen from the recent dispute around net neutrality, none of these corporations—or the government officials who cater to them—care about accessibility, much less affordability.

The only solution to problems of access and affordability is to nationalize the means of communication, beginning with the internet and phone service provider monopolies, to be put under democratic workers’ control. This is the only way the telecommunications industry can be rationally planned to meet the needs both of the workers who provide services and those who rely on it every day. And to do this, we need a socialist revolution.