A Brief Biography of Alan Woods 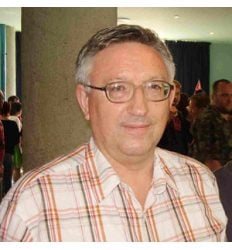 Alan Woods was born in 1944 in Swansea, South Wales, into a working-class family with strong Communist traditions. At the age of 16 he joined the Labour Party Young Socialists and became a Marxist. He studied Philosophy and Russian at Sussex University, and later in Sofia (Bulgaria), and at Moscow State University (MGU). He has a wide experience of the international labor and solidarity movements, particularly in Latin America, Pakistan, Russia, and Spain, where he participated in the struggle against the Franco dictatorship. He is a member of the National Union of Journalists in the UK.

Along with Ted Grant, Alan Woods was one of the main theoreticians of the Militant tendency in Britain in the 1970s and 1980s, and the editor of the Militant International Review. He is currently the political editor of the popular website In Defence of Marxism (www.marxist.com), and Secretary of the International Marxist Tendency (IMT). He is the author of hundreds of articles, pamphlets, and books, covering a wide range of issues including revolutionary politics and current events, economics, history, philosophy, art, music, and science.

In 2002, Woods launched the international Hands Off Venezuela Campaign, and has also been heavily involved with the work of the Pakistan Trade Union Defence Campaign. He has presented the ideas of revolutionary Marxism to tens of thousands of people at hundreds of conferences, trade union meetings, and universities around the world, in addition to hundreds of media interviews. He speaks several languages, including English, Spanish, French, German, Russian, and Bulgarian.

Among the books he has written for Wellred UK and Wellred USA are: Lenin and Trotsky: What They Really Stood For, and Reason in Revolt: Marxist Philosophy and Modern Science (both co-authored with the late Ted Grant); Bolshevism: the Road to Revolution; Marxism and the USA; The History of Philosophy; Ireland: Republicanism and Revolution; The Venezuelan Revolution: A Marxist Perspective; Reformism or Revolution: Marxism and Socialism of the 21st Century—A Reply to Heinz Dietrich. Woods is also a co-author of What is Marxism? He has also written introductions to several collections including Four Marxist Classics and Marxism and Anarchism. He is currently finishing a new work on Marxism and Art.