Big Business Gets a Free Lunch 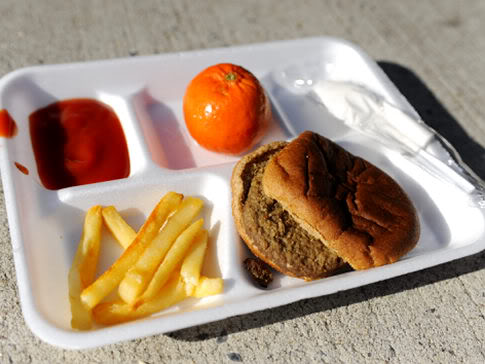 It was recently reported that angry students were Tweeting photos of their less-than-appetizing school lunches to First Lady Michelle Obama, founder of the “Let’s Move” campaign to end childhood obesity. Not only were the portions small—a result of the new, lower calorie guidelines—but some would question whether the matter photographed on the trays really constitutes food at all, let alone healthy food. The terrible state of school lunches can be linked directly to bureaucratic mismanagement on the part of the capitalist state and the private interests that stand to make enormous profits by selling food products to the government.

Right-wing economist Milton Friedman made famous the phrase, “there ain’t no such thing as a free lunch.” But in 1946, the year of the largest strike wave in US history, the National School Lunch Program (NSLP) was established to provide low-cost or free school lunches for students from low-income families. In 2012, the NSLP provided meals to over 31 million students. But perhaps, in this case, Friedman was on to something: this program comes at a cost. But not in the way he would have argued.

In the 2009–10 school year, the NSLP program provided free or reduced school lunches for 21 million students, up from 18 million in the 2006–7 school year. 11 states reported an increased of 25% or more in the same period. Reeling from the effects of the 2007–8 recession, this was the most dramatic increase in the program’s history, which was previously characterized by small incremental increases. Today, free or reduced lunches account for over 70% of the total lunches provided nationally by the NSLP.

School districts participating in NSLP, whether their food services have been privatized or are still public, receive cash reimbursements per meal served—no matter what they serve—as long as it adheres to the strict, rigid guidelines of what is—on paper—considered nutritious.
In an attempt to keep the cost of providing schools lunches low for school districts, there has been a turn towards the private sector in recent decades. Today, about a quarter of all school kitchens are run by private companies. By contracting out to companies that have their own distribution networks, and by laying off the largely unionized kitchen staff, school districts throughout the country aimed to save some money from their already starved budgets. Whether they saved money or not, the quality of the lunches began to go downhill and the contracted companies were able to make fortunes through the cash reimbursements from NSLP and the school districts.

More recently, as part of the continued onslaught of cuts and austerity, schools have been closing down their kitchens altogether—transforming them into mere reheating facilities for preprocessed food. This doesn’t just concern the disgusted students; it is something Chicago school-lunch workers, organized by UNITE HERE Local 1, fought in 2012, when they won a 5-year moratorium on repurposing existing school kitchens into “warm up” stations and on building new schools without kitchens.

However, the NSLP was not created merely to provide children with at least “one square meal a day.” The real impetus came from the powerful economic interests that dominate big agribusiness. Their aim was to make the working class shoulder the burden of capitalism’s lack of a rational plan of production. They pushed the NSLP so that the public sector could absorb agricultural surpluses and guarantee fat profits to the private sector in what is effectively a massive program of corporate welfare.

This coincided with the rise in the use of herbicides and pesticides in what came to be known as the “second agricultural revolution.” This was the period that ushered in more industrial methods of farming and new technology, leading to an accelerated pace of economic concentration in agriculture. Today, the vast majority of the food in the US is produced by just a handful of monopolies including Monsanto, ConAgra, Cargill, Smithfield, Tyson, and others who stand to make huge profits by receiving billions of dollars in various types of subsidies from the Department of Agriculture, whether it be in the form of direct cash payments, or in the purchase of their surpluses for distribution to programs like the NSLP. But this doesn’t mean that these surpluses are actually being used to improve student nutrition.

There are complex requirements and quotas on what is ordered by NSLP-participating districts if they are to continue receiving any deliveries at all. The result: pantries stacked high with certain types of canned vegetables; tubs of peanut butter that will never be consumed; freezers full to the brim with beef that will ultimately have to be thrown out. The situation is summed up well in a New York Times op-ed by Alice Waters and Katrina Heron, entitled “No Lunch Left Behind”:

“On top of these reimbursements, schools are entitled to receive commodity foods that are valued at a little over 20 cents per meal. The long list of options includes high-fat, low-grade meats and cheeses and processed foods like chicken nuggets and pizza. Many of the items selected are ready to be thawed, heated or just unwrapped—a necessity for schools without kitchens. Schools also get periodic, additional “bonus” commodities from the USDA, which pays good money for what are essentially leftovers from big American food producers.”

Major contract food service companies like Compass Group, Sodexo, Aramark, and their dozens of subsidiaries have fed and continue to feed millions through their contracts with prisons, UN “peacekeeping” missions, the US military, Halliburton and other military contractors—and public schools throughout the US. These companies keep costs low through the low-quality food they provide and through the hyper-exploitation of their employees, most of whom are not members of a union. In 2010, a scandal was revealed in New York State showing that Sodexo was receiving rebates from food processing companies in exchange for contracts. While these pocketed rebates saved Sodexo large sums of money, they continued to charge the schools the pre-rebate price.

Despite all the photo-ops of Michelle Obama and the various CEOs of these corporations in their announced “fight to end childhood obesity,” it is precisely these companies that are some of the biggest hurdles in the way of providing healthy meals to students. These companies continue to push the line that “children don’t want to eat healthy food.” The reality is that corporations like this know that junk food is not only cheaper to produce, but it is in higher demand for the nation’s youth as it offers quick calories.

What is needed is a complete overhaul of the entire food industry—and of society on the whole. This is why the Marxists are in favor of the nationalization of the food distribution and agrichemical giants, the major grocery and food service corporations, the fast-food chains, to be brought under a democratic, rational, socialist plan of production. This would be only the first step towards providing healthy school lunches—and healthy food for everyone of all ages.

Based on such a plan, it would be easy to set up a vast network up of public restaurants and cafeterias where nutritious, high-quality, and infinitely varied and interesting meals could be provided to all at a low price. This could all be combined with a massive program to educate the population on nutrition and exercise, linked to a universal healthcare system. All of this would be operated and administered democratically in conjunction with the broader public by skilled workers earning high wages and with full union benefits and protections. This is just a taste of what life under socialism will be like once society is no longer dominated by a handful of profit-hungry individuals and corporations.

The Reagan administration insisted that ketchup was a vegetable. Recently, Congress has found that frozen pizza is also a vegetable, as tomato paste is used to make it. The exploitation of the health of millions in the pursuit of profit is a direct result of the capitalist system. In order to provide a healthy life for all we must fight for socialism.