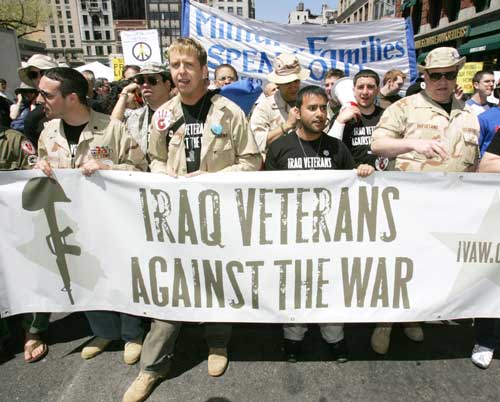 Polls continue to reveal the deep and widespread dissatisfaction with the war in Iraq. For example, a Washington Post-ABC News poll, conducted in January, showed 61 percent in opposition to Bush’s “surge.” A more general CNN poll carried out in February, which asked, “Do you favor or oppose the U.S. war in Iraq?” found that 64 percent of those polled opposed the war.
But for all the polls, which shine light on the stance of millions in the U.S., there is an glaring absence. March 19, 2008 marks the fifth anniversary of the war on Iraq, and yet there will be no unified mass mobilization, as demanded by tens of thousands of activists nationally.

Other activities will take place to mark the grim anniversary. Iraq Veterans Against the War will be holding “Winter Soldier” testimony hearings in Washington, a forum for those who have been on active duty in Iraq and Afghanistan, to speak out about the situation U.S. imperialism has plunged those countries into. A small-scale non-violent civil disobedience action has been called in DC on the anniversary. Local actions will take place across the country. The WIL will be involved in many of these actions to help build anti-war consciousness. However, a vital component is missing: a massive united mobilization demanding “End the War Now!  Such a unified call could have potentially drawn hundreds of thousands of protesters, and raised not only anti-war consciousness, but confidence in our ability to actually end the war through mass, united action.

Part of the reason for this situation is the log jam in the movement; the main national formations United for Peace and Justice (UFPJ) and Act Now to Stop War and End Racism (ANSWER) have been divided for a number of years. Under pressure from the rank and file of the movement, ANSWER sought to redress the split, in a statement made in May 2007 calling for a massive unified action. Unfortunately, the call was not taken up at that time by UFPJ, and the split continues.

At the outset of the war, in the absence of any mass grass-roots anti-war organization, groups like ANSWER and UFPJ played an important and necessary role, and sprang to the  head of the movement. However, the movement cannot simply wait on the sidelines waiting for the divided national movement to be overcome. The overwhelming sentiment among anti-war activists is that an important opportunity was lost on the 5-year anniversary. But instead of merely lamenting this situation, hundreds of organizations and individuals are moving forward to unite the movement around a few basic demands.
In October, after a series of large, well-attended regional mass mobilizations including a large mass “die in” in Washington in which large numbers of veterans participated. These actions were organized primarily at the grass roots level, and produced several regional networks or coalitions that have maintained their structures after the fall mobilizations. This provided the groundwork for a new effort to unite the movement nationally.

At the beginning of 2008, after it was clear that there would be no unification of the movement for the five-year anniversary, a group of long time anti-war and labor activists and regional coalitions began the initial work of organizing a national conference to discuss the future of the antiwar movement. Just as the WIL energetically took up ANSWER’s call for unity in May 2007 and every other such call, we now actively take up the call for a National Antiwar Conference , to be held in Cleveland, Ohio on June 28 and 29 of this year.

The conference call focuses on the need for mass, united action, political independence for the movement, democratic decision-making through open national conferences, and the basic demand “Out Now!”

By reaching out to all the main national anti-war coalitions including ANSWER, UFPJ, the Troops Out Now Coalition, Iraq Veterans Against the War, Veterans for Peace, U.S. Labor Against the War, and the dozens of local and regional activists, we hope to bring about the unity of the movement through democratic discussion and concrete, united action. The current split at the national level may or may not be resolved in the short term, especially in an election year. But the potential for organizing a broad-based and democratic national antiwar network is tremendous, and can only strengthen the movement as a whole.

The thousands of anti-war activists who have been building the movement for several years, and in some cases several decades, have gained important political and organizational experience through their activity. They are the backbone of the movement, acting to organize and educate the broader ranks of the movement. They have an important role to play in building this conference.  We call on every anti-war organization and activist to begin making plans to attend the National Antiwar Conference and to promote and build for it locally.

The majority opposes the war already, our task is to collectively work towards orienting the general antiwar sentiment into united mass action.

In the final analysis, the war is a class question. We are engaged in a colossal struggle against the war on workers at home and abroad. Stopping the war will be possible only if the working class places itself at the head of the movement. The antiwar movement must also link up with the struggle of immigrant workers and the labor movement generally. We all suffer from the economic impact of the war here at home.

We encourage all anti-war activists looking for a solution to the problems facing the vast majority of humanity to seriously explore the ideas of revolutionary Marxism. While we obviously do not expect the bulk of the anti-war movement to be won to our ideas overnight, as we see it, Marxism is the best tool available to aid in our understanding of the root causes of this epoch of wars and crisis, in order to orient the movement toward ending imperialist wars once and for all: by fighting for the end of capitalism. We invite our readers to contact us to open a dialogue on this question.