Come All Ye Faithful: Vote for Me! The Presidential Candidates and Religion

"It is easier for a camel to go through the eye of a needle, than for a rich man to enter the kingdom of God”  – The Bible (Matthew 19:24) 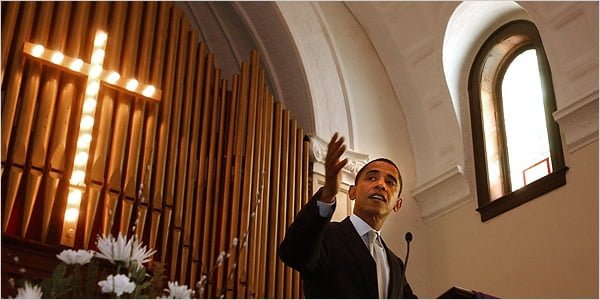 In the run up to any election it is not at all uncommon to hear anything and everything promised by candidates hoping to win votes. For those following U.S. electoral politics right now, it is clear that the big business candidates are presenting their respective religiosities as credentials of a sort to prospective voters. The open pandering to the ‘faith vote” displays the cynical depths the representatives of the ruling class are willing to go to win votes. This is not simply a harmless phenomenon but a noxious indication of the rottenness of the system.

It is not our intention here to cast doubt on the personal beliefs of any of the candidates, because that is not the point. The point is that since there are only negligible distinctions between the candidates, they cynically appeal to people’s religious sentiments in order to stand in the spotlight a moment or two longer to try to win more votes. They also use it as an opportunity to try to convince workers that the system they defend is not only just, but even “holy.”

Even a cursory look at at what is being said on the campaign trail shows the manipulation of “faith” to appeal to voters. Take for example Barack Obama who, speaking to an audience of 4,000 people, said he hopes to be an “Instrument of God” and asked for prayers for his candidacy. He went on to say: “I am confident that we can create a Kingdom right here on Earth.”

Then there’s the more subtle dodging by John Edwards of a question asked about the separation of church and state: “My faith informs everything I think and do. It’s part of my value system. And to suggest that I can somehow separate and divorce that from the rest of me is not possible.”

Even candidates who would prefer to keep their religious backgrounds less prominent have entered the race with faith in hand. Rudy Giuliani had this to say:  “Where do our rights come from? Most Americans believe they come from God.” Mitt Romney, in attempting to cast himself as a “person of faith” in general, instead of being exclusively associated with Mormonism, made a similar statement: “We should acknowledge the Creator as did the Founders – in ceremony and word. He should remain on our currency, in our pledge, in the teaching of our history, and during the holiday season, nativity scenes and menorahs should be welcome in our public places. Our greatness would not long endure without judges who respect the foundation of faith upon which our Constitution rests. I will take care to separate the affairs of government from any religion, but I will not separate us from the ‘God who gave us liberty’ … Americans acknowledge that liberty is a gift of God not an indulgence of government.”

Going beyond a simple appeal to faith, John McCain went so far as to say he would prefer a Christian in the White House as “an important part of our qualifications to lead.” He also said: “I just have to say in all candor that since this nation was founded primarily on Christian principles … personally, I prefer someone who I know who has a solid grounding in my faith.” 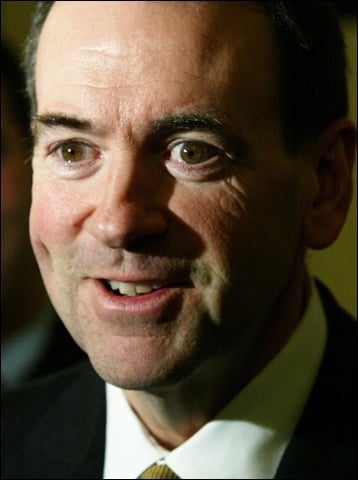 Mike Huckabee is an ordained Southern Baptist minister and is referred to by his campaign as a “Christian leader.” In November he had this to say while speaking to an audience at the late Jerry Falwell’s Liberty University: “There’s only one explanation for my surge, and it’s not a human one. It’s the same power that helped a little boy with two fish and five loaves feed a crowd of 5,000 people.”

And according to Hillary Clinton: “I’ve had a grounding in faith that gave me the courage and the strength to do what I thought was right, regardless of what the world thought.”  She and her “fellowship” – a group that includes many powerful figures in DC – believe “that the elite win power by the will of God, who uses them for his purposes. Its mission is to help the powerful understand their role in God’s plan.”

Marxists are the most consistent materialists, and as such, are not religious. Dogma and mysticism are completely alien to scientific socialism. However, Marxists do not hold religious-minded workers in contempt for their beliefs. As Marx himself explained, for many workers, religion offers the hope for a better life in an otherwise cruel and inhuman world:
“Religious distress is at the same time the expression of real distress and the protest against real distress. Religion is the sigh of the oppressed creature, the heart of a heartless world, just as it is the spirit of a spiritless situation. It is the opium of the people.”(From the Critique of Hegel’s Philosophy of Right)

And as Lenin explained in a 1905 article on socialism and religion: “But under no circumstances ought we to fall into the error of posing the religious question in an abstract, idealistic fashion, as an ‘intellectual’ question unconnected with the class struggle, as is not infrequently done by the radical-democrats from among the bourgeoisie. It would be stupid to think that, in a society based on the endless oppression and coarsening of the worker masses, religious prejudices could be dispelled by purely propaganda methods. It would be bourgeois narrow-mindedness to forget that the yoke of religion that weighs upon mankind is merely a product and reflection of the economic yoke within society. No number of pamphlets and no amount of preaching can enlighten the proletariat, if it is not enlightened by its own struggle against the dark forces of capitalism.

“Unity in this really revolutionary struggle of the oppressed class for the creation of a paradise on earth is more important to us than unity of proletarian opinion on paradise in heaven.”

In other words, the fight for socialism is nothing other than for the fight for a better world in the here and now, not in the “sweet bye and bye” after a life of exploitation and servility. It is a fight that every worker, regardless of denomination, church, or creed should get behind. In a phrase: we seek not life after death – but life before death!
Political candidates use every type of empty promise to win office, offering the masses a politically calculated form of “faith” in order to win the most votes. They preach the kind of “faith” that encourages the vast majority to accept a world of misery and exploitation, that slaves should have “faith” that the masters will “do the right thing.” We must reject this kind of “faith” and more importanty, the very system that cynically uses it to justify its existence.

We invite all workers and youth, religious or not, to engage in a discussion with us concerning the pressing need for a mass political party that truly represents the interests of the majority. A party whose candidates will run not on hollow promises and pander to sincere sentiments for a better world in the hereafter. Candidates who will run on a program that can truly improve our quality of life. A party by and for the only class in society that can build a better world in the here and now: the working class.