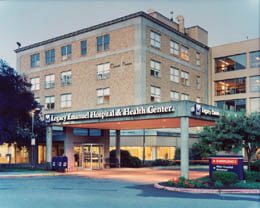 On July 28, in a solid display of union solidarity across AFL-CIO and Change to Win lines, members of the ATU, ILWU, painters, carpenters, postal workers and more came out in support of the workers at Emanuel Legacy Hospital, organized by SEIU Local 49. Emanuel Legacy’s workers are currently bargaining without a contract. The Legacy administration has not missed an opportunity to display their contempt for SEIU Local 49 and their disdain for the workers it represents.

The Legacy system is composed of five hospitals. While technically “non-profit,” they are driven by the bottom line, as any capitalist enterprise. Their non-profit standing is a result of their 501(c)(3) tax status which obligates them to treat patients who have no hope of paying. Far from being motivated by humanitarian concerns, the Legacy system receives millions per year in tax breaks as a result. According to ex-CEO, Lee Donamico, the Legacy System pulled in $39 million in profits in fiscal year 2007. This is probably a conservative figure that does not include the millions saved in tax breaks. Ultimately, that profit is made from the unpaid labor of the workers, which the administration puts into its own pockets.

Emanuel is the largest, busiest, and biggest money maker of Legacy, however, its workers are the most poorly paid. This not only hurts the employees, it impacts patient care as well, since employee turn over is high and patients are less likely to receive the care of an experienced staff, as they would at the other Legacy hospitals where Emanuel workers frequently transfer to get better wages.

Any reasonable person would expect that workers in the same hospital system, performing the same jobs, would make the same wages and benefits. However, the administration of Legacy have found that the current inequality of wages suits their interests – and increases profits. This inequality hurts all Legacy workers’ ability to struggle for better wages and work conditions. The Legacy administration’s strategy of “divide and conquer” is all the more abhorrent since Emanuel is in a traditionally largely African American area of Portland.

Furthermore, some of the better-paid workers employed in the Legacy System work at unorganized hospitals, discouraging unionization drives. However, if it wasn’t for a union presence in the Legacy System, all workers’ wages and benefits would be in a race to the bottom, since there would be no organized force that could resist the administration’s greed.

The union is demanding equality when it comes to all workers’ wages and conditions, as well as patient care, throughout the Legacy System. They are also demanding a one-year contract to line up the expiration date with Good Samaritan Legacy in Northwest Portland. Also being demanded is a 6 percent cost of living increase to keep up with the official increase in the cost of living of about 4 percent, as well as the 43 percent increase in the price of gasoline since January. The demand for 6 percent is even more modest when we take into account that Emanuel workers have actually lost money over the last three years, since the Cost of Living Adjustment (COLA) was set at just 2.5 percent. The Legacy administration has outright rejected all of this and even went so far as to insult the workers, countering the demand of 6 percent with an ultimatum that they would only offer a 1 percent cost of living increase.

Not a room would be cleaned, not a meal served, not an appointment booked, not a patient transported, not an instrument sterilized, or a medical good delivered if it weren’t for the members of SEIU Local 49 at Emanuel. Even if the administration forces a strike and is able to get replacement workers through the picket lines, it would take some time before the scabs could find their way through the sprawling complex of the hospital, let alone be able to perform their jobs with sufficient competency. This could ruin Emanuel as a money making hospital for the Legacy administration. In other words, the administration needs the Local 49 members more then these workers need the administration.

More importantly, the issues of inequality and health care, which are at the heart of the labor struggle at Emanuel, can garner the support of the majority of working people in Portland. The informational picket line on July 28 was a vivid demonstration of this. To build this, members of Local 49, along with supporters in Jobs With Justice, went to different unions, churches, and activist organizations in a successful effort to rally solidarity. If this potential support spreads and is actively mobilized, the continuing hard ball tactics of the administration would dissolve like smoke in the wind.

With all this in mind, Local 49 needs to educate its membership in the spirit that we are operating from a position of strength. The volunteer contract action team (C.A.T.) has been working tirelessly to discuss with the membership and address their concerns. Truth be told, the members of the C.A.T. have been having to make up for lost time. The union’s presence and activity has not been what it should have been since the last contract in 2005. As a result, many rank and file members are not aware of their role in making the union strong for the benefit of all the workers and patients at Emanuel.

Furthermore, in 2005 they went out on a largely symbolic one-day strike that had not been sufficiently well prepared to actually hurt the administration. Consequently, the membership felt they had to accept a weak contract and many were demoralized. However, history does not have to repeat itself if the union approaches this struggle with the democratic input and control of the membership, a plan to mobilize the power of all SEIU Local 49 members, and the solidarity of all Portland workers to win a solid victory. If a strike can be avoided, this is the best way to achieve our demands. But if a strike is forced on the union by the intransigence of the administration, preparing in advance is the best way of assuring that the workers come out on the winning side.

If the SEIU International and Local 49’s leadership mobilize their full resources to support the Emanuel workers, this battle can be won. Such victories have a tendency to be contagious, and would allow Local 49 to expand its membership at Emanuel and organize the entire Legacy System. Furthermore, a solid win and increase in union power could encourage other, broader struggles to benefit all workers, such as demanding genuine universal health care at the expense of the big corporations, rather than the phony proposals that are being peddled by the big business politicians.

Therefore, it is in the interest of all of SEIU Local 49 members to throw all their strength and resources behind the struggle at Emanuel, including preparing for a strike, which management may force on us. This means ensuring that our members’ basic economic needs are taken care of as much as possible in the event of a strike. A strike with mass pickets to prevent the use of replacement workers, and a serious effort to get all of the community Emanuel serves out in support, would be the quickest way winning and letting the Legacy administration know who really has the power at Emanuel.