Greece: SYRIZA Must Mobilize the Workers and the Youth!—Speech at the Central Committee Meeting of Syriza 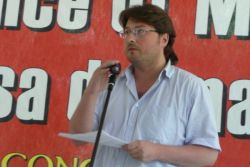 Published below is a speech by a representative of the Communist Tendency of SYRIZA, Stamatis Karayannopoulos, at the SYRIZA Central Committee meeting that took place during the weekend of October 18–19, 2014.

The developments over recent weeks confirm that the Greek ruling class is facing the greatest economic and political impasse in its recent history. At the same time we have the electoral turn of the working masses and the poorer social layers towards SYRIZA as a means of ridding themselves of the pro-memoranda coalition government. This amounts to an exceptional historical opportunity for the Left in our country.

We have the opportunity to achieve our stated aim—that is the socialist transformation of society. This is an objective that SYRIZA must link to the present and to ceaselessly pursue; otherwise, quite frankly, SYRIZA has no political purpose to exist.

The critical nature of this moment in history must be realized, first and foremost, by our comrades of the leading majority. It is their duty to the thousands of militants who gave their lives for the ideals of the communist movement, and to the millions of people that have been impoverished by the memoranda, not to repeat the historical errors of Stalinism and social democracy—political currents that blighted the cause of socialism in Greece and internationally.

In light of the government policy program that our comrade, the president of the party, (i.e., Tsipras) presented at the Thessaloniki International Exhibition recently, it is unfortunate that the leadership seems to be steadily treading the path that led to the great political errors of the past—namely, the path of reconciliation with capitalism. The most outrageous example of this is the demand for “quantitative easing.” This represents the burdening of the taxpayer with the exorbitant cost of servicing the enormous public and banking sector debts, and funding the supply of cheap credit to the capitalists who seem to have declared an investment strike in Greece and internationally. What is more, we have been informed by our comrade president, that Mario Draghi and Barak Obama approve of SYRIZA’s positions as put forward by our comrade president!

Comrades of the leading majority, it is time to prepare yourselves and the millions of impoverished workers who look to SYRIZA for the inevitable battles ahead! Coming to power won’t be a “stroll in the park”! An electoral victory on the part of SYRIZA would undoubtedly be accompanied by economic warfare and efforts on the part of capital to knock us off our course.

Comrades, do not sow illusions in the minds of the working masses that the Troika (i.e., EU, ECB, and IMF) and the Greek ruling class will allow us to effectively negotiate and apply a “progressive” and “democratic” system of government as long as it is founded on an economic system which is in an impasse.

You must mobilize the workers and the youth as soon as possible to bring to power and defend their own government; a government of the Left based on its own strength in the working class.

And above all, if you do not mean such a government to be merely a momentary political phenomenon to be cut short by the chaos that our class enemy would most certainly create, then you must adopt an appropriate program. Such a program mustn’t be a “PLAN B” that you keep secret and under lock and key; rather it must be a publicly declared program which ought to make clear that:

The Communist Tendency of SYRIZA, defending these key ideas, here and now calls for the scheduling of an extraordinary programmatic conference, in order for the members of the party to decide whether SYRIZA should rise to power with the positions of Marx or with the bankrupt policies of Keynes.