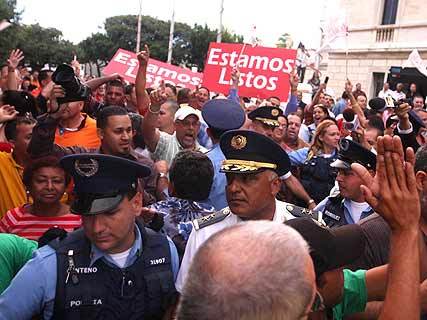 The Puerto Rican Federation of Teachers (FMPR) has done what many thought impossible: it has defeated one of the world’s most powerful labor organizations in an election to decide who will represent Puerto Rico’s 42,000 public school teachers. 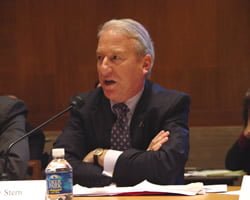 In the October election, just 14,675 teachers voted in favor of representation by the U.S.-based Service Employees International Union (SEIU), while 18,123 voted “no.” Because of its legally proscribed strike activities, the FMPR was banned from participating, and instead organized a “Vote No” campaign. FMPR supporters allege that as many as 2,000 “no” votes were stolen. Nevertheless, the Federation won in a landslide. The big plurality to reject affiliation is a stunning defeat for President Andy Stern and the rest of SEIU’s international leadership.

Last fall, before SEIU stepped onto the scene, members of the FMPR voted at a mass meeting of more than 7,000 members to authorize a strike. The teachers had suffered through more than two years without a contract and had had enough: “Contract or Strike!” they told Puerto Rico’s Secretary of Education Rafael Aragunde in November. The response of the government was swift and unusually harsh. On January 8, before the teachers had even begun their strike, the Public Sector Labor Relations Commission of Puerto Rico and the island’s governor, Anibal Acevedo Vila, recently indicted on 19 criminal counts of corruption, unilaterally decertified the Federation, invoking Puerto Rico’s Law 45, which grants public employees the right to bargain collectively but denies them the right to strike.

Enter SEIU. While the leadership of the FMPR prepared to fight their decertification in court and the union’s rank-and-file prepared to fight for their contract demands in the street, SEIU’s international leadership was busy rolling out its own plans for Puerto Rico’s teachers. As Juan Gonzalez subsequently revealed in the New York Daily News (2/29/08), Dennis Rivera, an SEIU international vice-president and one-time member of the Puerto Rican Socialist Party (PSP), had met secretly with Acevedo Vila on multiple occasions while negotiations between the island’s government and the FMPR were ongoing. As reported by Gonzalez, the governor told Rivera prior to the strike that the Federation is “yours to take.”

Almost simultaneously with the FMPR’s decertification, SEIU announced the affiliation of the Teachers’ Association of Puerto Rico (AMPR), the island’s association of school principals and supervisors – itself a longtime rival of the Federation – and its intention to replace the FMPR with an offshoot of its new affiliate, the Puerto Rican Teachers’ Union (SPM).

At a time when the leadership of SEIU should have expressed its solidarity with the striking teachers, Stern, Rivera, and company chose instead to strike a deal with the government-employer and forge with them a company union in an effort to cut the ground from beneath the feet of the FMPR. Stern’s top-down, class collaborationist approach to unionism and his strategy of union-member accretion at all costs have been roundly criticized by democratic reformers and rank-and-file activists in the labor movement, but his bid to raid the FMPR reaches new lows. Gonzalez called the raid “a shameful betrayal of solidarity.” Labor journalist Steve Early told Democracy Now! (10/27/08) that the raid “tarnish[ed] the image, not only of SEIU, but all unions.”

At a time when the labor movement is on the defensive, it is imperative that unions be able to count on the support of other unions in fighting their real enemy: the bosses. Apparently, however, this logic is lost on the leadership of SEIU. Rather than remaining true to their commitment to organize the unorganized, they opted in Puerto Rico for a policy of reorganizing the already organized, something that has done little for either the strength or the unity of an already fractious labor movement, whether on the island or the mainland.

Despite the negative role played by SEIU’s leadership and their best efforts to undermine the FMPR, the Federation has persevered. Their February strike, which paralyzed Puerto Rico’s public school system for 10 days, drew unprecedented support from parents, students, and local communities sympathetic to the teachers’ struggle for a just settlement of their grievances and the improvement of public education on the island. As a result of this critical support and the determination and militancy of the teachers and their union, the government was forced to accept several of the strikers’ key demands, including an immediate raise of $250 per month for all teachers, a freeze on the government’s plans for privatization of the public education system, and a pledge from the governor to slowly but surely increase teachers’ starting salaries to $3,000 per month. In the scope of both its demands and its base of support, the strike, by its end, had become a small social movement – and its success was a victory not only for the FMPR but also for all defenders of public education. 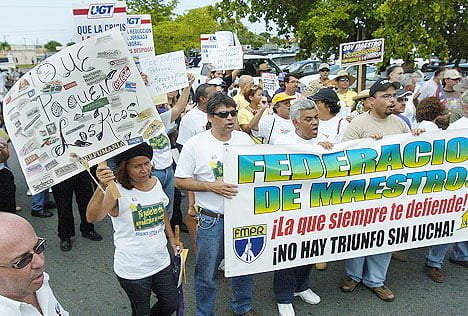 The implications of the FMPR’s electoral victory against SEIU, however, are greater still. In the first place, it is important to keep in mind that the FMPR rank-and-file has militant and democratic traditions and that its sitting president, Rafael Feliciano of the Commitment, Democracy, and Militancy (CODEMI) caucus, is an avowed socialist. In this context, SEIU’s raid was not simply an attack on the Puerto Rican teachers and their union, but also on the ideals of militancy and trade union democracy which the FMPR – and, in particular, CODEMI – upholds. SEIU’s leadership sought by its raid not only to replace the FMPR as the teachers’ representative, but also to replace FMPR’s style of militant and democratic unionism with its own brand of top-down, management-friendly unionism. The rank-and-file’s rejection of SEIU, therefore, also represents a rejection of class collaborationist unionism. The battle between SEIU and FMPR forms part of the much larger war of ideas and interests now raging in the broader U.S. labor movement. The FMPR’s victory is a victory for those who believe securing the future for labor and the working class in general depends on rebuilding a militant movement for democratic, class-struggle unionism.

Unfortunately, SEIU’s leadership is pursuing the same policy in Puerto Rico as it pursues on the mainland: an anti-worker policy of collaboration with the bosses. They are also imposing themselves in undemocratic fashion on an independent union. The FMPR may not have been hostile to SEIU if the latter had proposed working together in a spirit of solidarity. SEIU’s leadership, however, behaved like a bull in a china shop, and it is therefore no surprise that the Puerto Rican teachers responded negatively. Thus, in voting against affiliation with SEIU, the teachers not only opted for union militancy and democracy over corporate unionism; they also sent a clear message to U.S.-based unions that, while their solidarity is welcomed, attempts to manipulate or control Puerto Rican unions and unionists are not.

SEIU’s actions in Puerto Rico have also raised concerns as to their plans for the rest of the Americas, and with good reason: the AFL-CIO’s tacit and often direct support of U.S. imperialism’s foreign policy over the last few decades remains a sore subject for many Latin American unionists today. SEIU is engaged in important solidarity work with the persecuted trade union movement in Colombia; and just this past July, Stern called on the Bush administration to grant visas to the wives of the Cuban Five, five Cuban nationals accused by the U.S. of spying and whose spouses have thus far been barred from visiting their husbands in prison. There is no doubt, then, that SEIU does some good solidarity work. The question is at what cost: What will the union ask – or demand – as the price for its support? The FMPR has drawn a line in the sand. A true and equal partnership between North American and Latin American labor organizations must be based on genuine solidarity  and respect.

FMPR’s victory represents the beginning, rather than the end, of the struggle between the different models of unionism being offered to the teachers of Puerto Rico and the wider labor movement. By voting “no” in the recent elections, the teachers have rejected SEIU’s effort to install a bosses-friendly union in the Puerto Rican public education system and have expressed their continued support for the FMPR, which has served as their exclusive bargaining representative for the past 40 years. At the same time, however, the victory of the “no” vote comes at a cost. The prospects for an FMPR return to official bargaining status have been improved by the “no” vote, but Puerto Rico’s teachers are still without a bargaining representative or agreement. While the FMPR remains decertified, SEIU took out a paid ad in the San Juan daily, El Vocero, asserting that the employer, and not the FMPR, won the elections, and declaring their intention to continue to campaign for representation of the island’s teachers.

A new challenge lies ahead: to see the FMPR re-elected as the exclusive bargaining representative of Puerto Rico’s teachers and the return to the teachers of their full labor rights as unionized workers. The struggle of the FMPR against the governor of Puerto Rico and SEIU’s class-collaborationist leadership can be an inspiration to all workers. U.S. labor leaders should drop their policy of “partnership” and go on the offensive against the bosses. They should give their support to the FMPR. The SEIU leadership should take the time to learn from the militant tactics of the FMPR, rather than trying to replace this union, which clearly has the support of the majority of Puerto Rico’s teachers.