Lack of “Change” Leads to Discontent 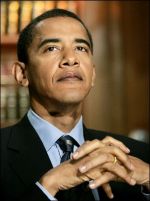 With the much ballyhooed “first 100” days of Barack Obama’s Presidency long past, we are starting to see signs of disillusionment from many of his more vocal supporters. Obama, the man who was supposed to usher in a new era of “change,” is now increasingly being seen as “more of the same.”

In July’s issue of Harper’s, a liberal monthly magazine, Kevin Baker’s cover story directly compares Obama to Herbert Hoover. He writes, “Obama’s failure would be unthinkable. And yet the best indications now are that he will fail, because he will be unable—indeed he will refuse—to seize the radical moment at hand.” (Emphasis in the original.) Nobel Prize winning economist and NY Times Op-Ed columnist, Paul Krugman, has also famously already been at odds with the Obama Administration. In a recent column regarding Obama’s “overhaul” of the economy Krugman says, “In short, Mr. Obama has a clear vision of what went wrong, but aside from regulating shadow banking — no small thing, to be sure — his plan basically punts on the question of how to keep it from happening all over again, pushing the hard decisions off to future regulators.” Even Bill Maher, the popular anti-Bush comedian, devoted several minutes of his HBO show to chastise Obama for being more of a celebrity than a leader. It appears Obama’s elegant platitudes about the “irresponsibility” of corporate America are proving insufficient even for those who are willing to give him the benefit of the doubt.

There is a material reason why Obama is no longer wooing many of his previous allies. From his campaign promise to fundamentally revamp the health care system, to his promise to shut down the detention center in Guantanamo Bay, very little has actually been done. Take health care for example. Despite the majority of Americans wanting a universal, socialized system similar to those in other industrialized countries, Obama has ruled out any such proposal. Recently, while speaking to the American Medical Association, Obama made it clear that the “public option” in his unnecessarily complex health care plan is not a “Trojan horse” for a single-payer system.  In other words, forget about it.

Obama was also the “anti-war candidate.” Not only has Obama done little to nothing to end the occupation of Iraq since he has taken office, he has actually expanded military operations in Afghanistan, as well as increased cross border attacks into Pakistan. On top of all this, the Obama Administration has kept many Bush-era “anti-terrorism” policies, including the above mentioned failure to close Guantanamo Bay. Jeremy Scahill, best-selling author and independent journalist, was recently asked about these policies on Bill Moyers’ PBS show. He pointed out that not only have prisons not been closed, they have expanded. According to Scahill, “The fact is that, at Bagram, we see an expansion. They’re spending $60 million to expand that prison. You have hundreds of people held without charges. You have people that are being denied access to the Red Cross in violation of international law. And you have an ongoing position, by the Obama administration, formed under Bush, that these prisoners don’t have right to habeas corpus.”

One of the most important “historic changes” promised was Obama’s “pro-labor” stance, or so we were told. While running for office, Obama did give pro-union legislation, such as the Employee Free Choice Act, some lip service. Since taking office, however, he has yet to use the power of the bully pulpit to rally support for the bill. The campaign to pass EFCA has been organized labor’s top priority for several years now. A tremendous amount of time, effort, and money has been spent by Labor to bring about a Democratic-controlled Congress as well as having a Democrat in the White House. Now that these goals have been realized, we see the Democrats making no substantial effort to pass even this modest legislation. While Obama has remained quiet, other Democrats have come out openly against the bill, effectively killing it and saving Obama the embarrassment of having to completely renege on his word. As Josh Lucker wrote in these very pages, “The unions nationally contributed $450 million in the last election to the Democratic Party, and what do their members have to show for it? More job losses, continued loss of pay, no universal health care, bailouts for the bosses, and now, the final nail in the ‘hope’ coffin seems to have been driven. A central point for the union support of the Democrats in the 2008 elections, EFCA, appears to have been an empty promise.”

Many of these policies have our well-meaning liberal friends scratching their heads in bewilderment. Many first time voters are beginning to wonder how much their vote really matters. None of the changes they voted for are even being attempted, let alone implemented. Since well before Obama took office, Socialist Appeal predicted there would be no fundamental change in policies. This isn’t because we own a crystal ball, or are privy to any secret information; it is the result of our class-based analysis of U.S. society. Put simply, Barack Obama is a representative of the ruling class, and the policies he puts forth will benefit the class he represents. While there very well may be some cosmetic changes (which, interestingly enough, have yet to happen), Obama and the Democratic Party are simply incapable of implementing any real fundamental change.

Above all, Obama’s election highlights the need for political class independence. Even the most “progressive” candidate is no match for the political machine of our business-controlled two-party system. In order to implement the changes that many people desire, a mass party of labor based on the unions is needed, fighting for a socialist program. These societal changes inevitably will meet resistance. After all, the colossal wealth and power of a privileged minority is at stake. The crisis we are living through is not simply the result of bad policies, bad leaders, and corporate greed. It is at root the result of the internal contradictions within Capitalism. This is exactly why the Workers International League advocates class independent political action. And in the final analysis, in order to achieve real change, we must end Capitalism.