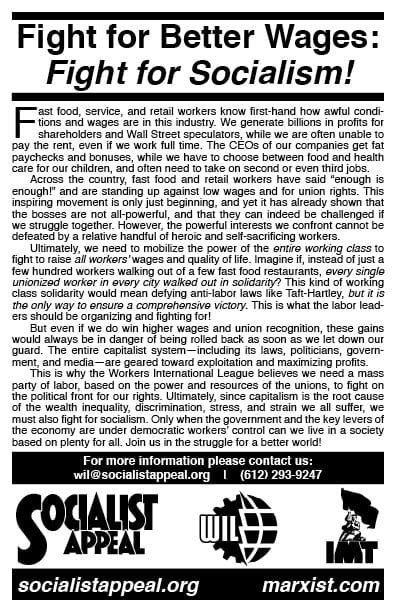 Fast food, service, and retail workers know first-hand how awful conditions and wages are in this industry. We generate billions in profits for shareholders and Wall Street speculators, while we are often unable to pay the rent, even if we work full time. The CEOs of our companies get fat paychecks and bonuses, while we have to choose between food and health care for our children, and often need to take on second or even third jobs.

Across the country, fast food and retail workers have said “enough is enough!” and are standing up against low wages and for union rights. This inspiring movement is only just beginning, and yet it has already shown that the bosses are not all-powerful, and that they can indeed be challenged if we struggle together. However, the powerful interests we confront cannot be defeated by a relative handful of heroic and self-sacrificing workers.

Ultimately, we need to mobilize the power of the entire working class to fight to raise all workers’ wages and quality of life. Imagine if, instead of just a few hundred workers walking out of a few fast food restaurants, every single unionized worker in every city walked out in solidarity? This kind of working class solidarity would mean defying anti-labor laws like Taft-Hartley, but it is the only way to ensure a comprehensive victory. This is what the labor leaders should be organizing and fighting for!

But even if we do win higher wages and union recognition, these gains would always be in danger of being rolled back as soon as we let down our guard. The entire capitalist system—including its laws, politicians, government, and media­—are geared toward exploitation and maximizing profits.

This is why the Workers International League believes we need a mass party of labor, based on the power and resources of the unions, to fight on the political front for our rights. Ultimately, since capitalism is the root cause of the wealth inequality, discrimination, stress, and strain we all suffer, we must also fight for socialism. Only when the government and the key levers of the economy are under democratic workers’ control can we live in a society based on plenty for all. Join us in the struggle for a better world!

A leaflet for use at fast food workers’ rallies can be downloaded here.