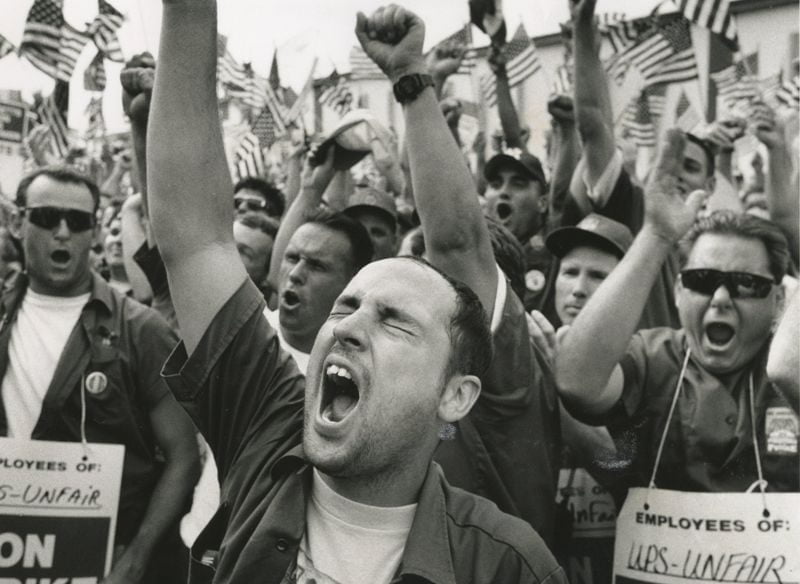 Read part one of this article here.

The 1997 Teamster strike against UPS was not simply a victory, but a smashing victory for the US working class and therefore offers many valuable lessons for today’s labor militants, both with respect to the strategic orientation and the day-to-day tactics. UPS is a “Fortune 500” company, meaning it is one of the most profitable in the nation, boasting of a $1.15 billion profit margin prior to the strike.  In 1992, the workforce was evenly divided between full-time and part-time workers, but by 1996, part-timers had increased to 61 percent and were only paid between $8 and $9 per hour.

The company approached contract negotiations in 1996 brimming with confidence.  It had grown accustomed to dealing with cooperative union officials, and even though the recently reelected Teamster President, Ron Carey, was a known labor militant, UPS knew that it had allies on the local level among the “Old Guard.”  Also, UPS was aware that the Teamster treasury was down, in part because Carey had already led several strikes and in part because the expenses involving the Consent Decree, allowing the U.S. government oversight over the union, was financed out of the Teamster treasury.  UPS believed the Teamsters could very well encounter difficulties trying to pay strike benefits of $55 per week to striking UPS workers.

Preparing for the strike

But the Teamsters were ready for a game of hardball.  In fact, they had begun to take the necessary steps to prepare for contract negotiations a year in advance, which any serious confrontation requires.  For example, they surveyed the membership, asking them which issues ranked highest with them.  When the overwhelming majority responded that an increase in full-time positions was their number one concern, the Teamsters raised this as their foremost demand.

The Teamsters also created a Contract Campaign Committee, consisting of 16 staff members, many of whom were former or current UPS workers.  Volunteer organizers were also solicited.  During the 5 months prior to the termination of the contract, this committee reached out to other unions and community groups for support, using the battle cry:  “Our fight is the fight of all American workers.”  This cry resonated throughout the working class because so many workers across the country have been recently converted into part-timers and have watched their standard of living drop accordingly.  The Teamsters made a point of saying, “If we win this fight, we can help others win their fight.”

As a further step in preparation, a special national meeting of all UPS Teamster local officials was held to discuss and then vote on the national bargaining strategy.  And most importantly, the Teamsters began to mobilize and unify the membership by keeping everyone informed of all developments and by encouraging the active participation of the rank and file, for example, through the creation of job membership networks.  By employing these tactics the leadership and membership were able to advance in unison.

In response to UPS’s regressive demands, the Teamsters countered, among other things, by insisting on an increase in full-time work along with a large raise in the wages of part-timers.  UPS then offered a $3,060 bonus to all full-timers and a $1,530 bonus to all part-timers if they accepted the company’s final offer, which was almost identical to their original demands. In July, the Teamsters took a strike authorization vote, and 95 percent gave their authorization for a strike, if necessary.  UPS then turned to Carey and asked him to grant the company an extension to the contract.  Carey refused.  UPS proceeded to request a 10-day notification period before striking.  This was also rejected.

On midnight of August 3 the Teamsters struck.  Their careful preparations resulted in 1,700 picket lines immediately appearing across the country in all 50 states, bringing the UPS trucks to a halt.  These picket lines were militantly maintained by the membership with the support of their allies from other sectors of the working class because they knew that success rested on keeping the trucks from moving.  And the union made it clear that it would not let government picketing injunctions stop them.  The union distributed fliers on a regular basis to keep the entire membership informed of exactly what was happening, both on the picket lines and in continuing negotiations.

At this point members of the “Old Guard,” who still occupied official positions on the local level, tried to sabotage the strike by refusing to distribute union fliers, hold membership meetings, or organize rallies.  They wanted to make Carey look bad in order to enhance their own reelection prospects in future elections.  And they feared that if the membership were activated, mobilized, and informed, it would quickly remove them from office because it would become transparent that the “Old Guard”, following in the footsteps of the capitalists, were exclusively operating in their own interests, not those of the union membership.  Jimmy Hoffa, Jr., current Teamster President and leader of the “Old Guard” faction, actually declared the strike “unnecessary” and claimed that it was only being called to divert attention from his unsupported accusation that Carey improperly diverted Teamster money to his 1996 election campaign.

But Carey did not waiver in the face of this treachery.  He announced that if local officials failed to implement the policies that had been democratically adopted, their locals would be placed in trusteeship.  In doing this, Carey let UPS know that he would not allow a “Fifth Column” within the union to continue to operate in the company’s interests.

The strike, which included almost 100 percent of the Teamster UPS workers, lasted only 15 days, at which point UPS capitulated.  The Wall Street Journal interviewed UPS executives and concluded that, “UPS executives misjudged the strength of rank-and-file allegiance to Mr. Carey and the union…”  The Teamsters accordingly won virtually all their demands.  The part-timers emerged as the biggest winners, with UPS agreeing to create 10,000 new full-time jobs by combining part-time positions.  The pension was significantly improved, limits were placed on subcontracting, full-timers received $3.10 per hour raise and part-timers got $4.10.  There were other gains as well.

What was at stake in the strike

The Teamster strike was not just a case of defending workers’ standard of living.  Rather, the union went on the offensive and wrenched huge gains from a company that was intent on raising its profit margin.  By prioritizing the cause of part-timers—those who are most exploited—the Teamsters revived the foundational principle of all unions:  “An injury to one is an injury to all.”  For this reason, the strike had the potential of opening the floodgates by inspiring workers across the country, just as victories during the 1930s and 40s succeeded in doing.  It had the potential of realigning the relation of forces between the working class and the capitalist class since it demonstrated a winning strategy not only against UPS, but against UPS with government backing and the support of the corporate media.  This strike served as a beacon of light for the entire working class because everything that was done ran directly counter to the business-as-usual conduct of bureaucratic labor officials who have grown adept at negotiating concessionary contracts that contain two and three-tier wage rates and benefits. Unfortunately there was no labor upsurge inspired by the Teamster strike.  The reasons for this failure are specific and will be addressed in a future article.

Lessons of the strike

One of the crucial ingredients of the victory was the organic relation established between the leadership and the rank and file.  Capitalists derive their power from their ownership of the big businesses, from the support they receive from the government, and from their control of the media .  We workers derive our collective power from the fact that we constitute the vast majority of the population (so a truly democratic society would operate in our interests), and we do all the work that makes this country run.   Without our labor, everything comes to an abrupt halt.  But we are not able to exercise our power unless we are organized, unified, and act in solidarity.  Then, we are unstoppable.

Moreover, the Teamsters made use of workers’ most powerful weapon—the strike.  Today’s labor bureaucrats, accustomed to waging phony strikes with porous picket lines, suffer huge losses and then nevertheless shamelessly declare victory.  The Teamster strike was a real strike, intent on bringing the operations of the company to a complete halt by organizing militant picket lines that did not let trucks through, thereby reducing the company’s ability to make profits to zero, which put the company in a stranglehold. Furthermore, because a strike is in essence an act of war waged against a formidable enemy, it cannot be initiated without thorough preparations, which the Teamsters took great pains to do well in advance of the strike itself.

Also, the Teamsters made a concerted appeal to the public, which is overwhelmingly working class, in their campaign.  By highlighting and advertising the plight of part-time workers, the Teamsters won the sympathy and support of working people everywhere, which is essential in terms of raising the morale of the striking workers.  Knowing that you are not alone when on strike is invaluable.  And morale is a crucial element in determining who soars to victory and who sinks to defeat in any conflict.

For decades workers have been told by their bureaucratic union officials that strikes don’t work any more, that they must establish a partnership with the company, and that workers must pray that the Democratic Party will come to their aid.  These same officials fail to mention that such a strategy has only succeeded in delivering a continually declining standard of living to the workers.

The Teamster UPS strike definitively demonstrated that a properly led strike can score dramatic victories for workers.  The relation between workers and their employers is a relation of power.  Consequently, workers can only succeed by exercising the tremendous power at their disposal—a power that flows directly from the fact that absolutely no profits can be made when workers close down a business with a strike.

These lessons must be adopted by a new union leadership which will inevitably arise once workers are no longer prepared to tolerate a further decline in their wages and benefits.  This leadership, which will constitute a new class struggle left-wing in the union movement, must be prepared to wage a battle independent of the Republicans and the Democrats since both parties prostrate themselves and grovel before the capitalists in order to secure financing for their elections.  Such a union leadership will provide the foundation for a new political party—a labor party—that can truly champion the interests of the majority of society’s members, the working class.  And then we will see the dawning of a new age in this country’s labor history.