Lobbying: How Politicians Are Bought and Sold 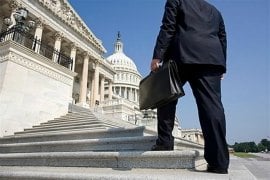 In his masterpiece Origins of the Family, Private Property and the State, Engels pointed out that even in a “democratic republic,” wealth still wields power indirectly, but all the more surely. “It does this in two ways,” he explains, “by plain corruption of officials, of which America is the classic example, and by an alliance between the government and the stock exchange.”

In a later work, State and Revolution, Lenin took up the same theme, examining the completely fraudulent character of parliamentary democracy. “At the present time,” he wrote, “Imperialism and the domination of the banks have ‘developed’ both these methods of defending and asserting the omnipotence of wealth in democratic republics of all descriptions.”Writing in 1917, Lenin went on to quote the example of a minister in the Provisional Government, Palchinsky, who resigned his office and was promptly rewarded with a cozy job by the capitalists, on a salary of 120,000 rubles a year. “What would you call this,” Lenin asked, “direct or indirect corruption?”

These arguments of Engels and Lenin, which are fundamental to a Marxist understanding of politics and the parliamentary process, have been completely vindicated over and over again in one country after another. Recent revelations of parliamentary sleaze have once again laid bare the thousands of threads that big business has woven into the fabric of so-called representative government.

It is well-known that in Britain, Tory ministers have an open-door policy when it comes to meeting lobbyists and the representatives of capitalism, but it was revealed recently that the government has an organized system to “buddy” multi-national firms with Tory ministers and moreover, there were plans to expand it. In July 2011, the trade minister announced the original initiative to give 38 firms, including telecoms, pharmaceutical and oil companies, a direct line to ministers and officials. In 2013, it was announced, a further 12 firms were being added to the list and 30 more are under consideration.

In the US Congress, the number of lobbying organizations is even more phenomenal. There are nearly 15,000 of them, around 30 for each and every elected representative. On every single issue, from climate change to taxation to health, to gun control, these professional ear-benders are canvassing, phoning, meeting, and schmoozing with elected representatives.

Billions of dollars are spent on an industrial scale—over $3 billion in each of the last five years—to buy the politicians that millions of Americans think they have elected. They have a thousand threads connecting them to PR agencies so they can spread unfavorable stories in the press to blackmail representatives who might be reluctant to follow their cues.

It makes no difference whether they are Democrats or Republicans—the overwhelming majority are in the pockets of big business. The “revolving door” operates here, too, with former lobbyists getting top jobs as aides to members of Congress, and then former aides going back into lucrative jobs among the lobbying firms. Congress members themselves are also part of the revolving door.

During recent demonstrations in Egypt, a BBC journalist asked a man in a Cairo street why he was demanding the overthrow of Morsi. The man replied that Morsi and the Egyptian Assembly had not put in practice the policies on which they were elected.

Without a blush or a hint of irony, the BBC journalist asked, “but that’s democracy, isn’t it?” It might be democracy to an unprincipled philistine, or to a representative of business, but to any normal worker it is the opposite of democracy.

In the 1980s, three Marxists from the Militant Tendency in Britain were elected as members of parliament for the Labour Party. The policy they applied in practice was simple: “A worker’s MP on a worker’s wage.” They donated the difference between an MP’s wage and the average wage of a skilled worker back to the movement.

Independent labor candidates in the US should make this policy a part of their platform. When the US labor movement finally breaks with the Democrats and Republicans and builds a mass party of labor, this policy should also be followed by its candidates.

After all, politicians who are wined and dined by lobbyists representing the billionaires and paid a salary many times more that of the average worker­—let alone those working for minimum wage—cannot possibly represent the interests of ordinary workers. This is just one example of how the rise of a labor party in the US will turn politics upside down.