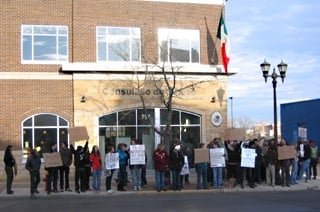 On the morning of Wednesday, November 8, some 50 Twin Cities residents rallied outside the Mexican Consulate in St. Paul, MN.

Along with thousands of others around the country, Minnesotans have been organizing locally to protest the brutal response of the Mexican federal government to the conflict in the state of Oaxaca.  What began as a teachers’ strike has spread to the whole of the city, calling into question the very legitimacy of the capitalist system and its state. The Popular Assembly of the People of Oaxaca (APPO in Spanish) has been established, an embryonic soviet, and the parallels with the Paris Commune of 1871 are strong.

The demand for the removal of governor Ulises Ruiz and the Oaxacan people’s valiant struggle against repression has rallied hundreds of thousands in mass marches in Oaxaca, caravans from across Mexico, and protests worldwide.

The St. Paul demonstration of support for the APPO shows once again that the developing Latin American

revolution is already having an effect on the consciousness of workers and youth worldwide.

All power to the APPO!