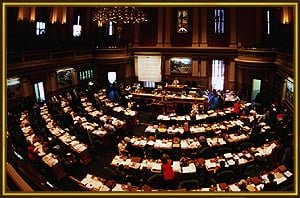 Negotiations in the U.S. Senate on immigration “reform” legislation have stalled.  Is this a victory or a defeat for the working class? Despite the hypocritical tears of some national immigrant rights leaders who lament that “we lost a big opportunity”, in reality, this stagnation of the process reflects an equilibrium in the balance of forces between those who benefit from the most miserable exploitation of 12 million workers, and the interests and organizational strength of those workers and their allies.
A detailed analysis of the proposal clearly reveals that this is an anti-immigrant “reform” which would increase the persecution of undocumented immigrants. This law would not improve the conditions of life of millions of families; on the contrary, it would make things worse.

So without a doubt its demise is a victory; at least, technically. This is because it is a victory that tastes like defeat, because nothing fundamental has  been resolved.  Millions of workers continue to live in hiding, without decent working or living conditions, in constant fear of deportations and at the total mercy of the companies they work for.

The struggle for the rights of immigrant workers is a complex push and pull between right wing racists, corporate America, politicians of both major parties, and pro-immigrant activists.  Fortunately, the weight and mobilization of millions of immigrants last May Day pushed several major unions and other pro-immigrant forces to oppose the demands of the most anti-immigrant sectors, who wanted to harden the proposal even further.

Reformist groups like La Raza have illusions that this system, which loots the whole of Latin America and bases its economic growth on the super-exploitation and misery of millions of workers inside and outside the borders of the U.S., converting the entire planet into a giant maquila in the process, will change its ways and sacrifice trillions of dollars in profits merely by asking “please”. This is an illusion.  There can be no reforms without mass pressure from below.

So which is the way forward? Unfortunately, this year’s May Day demonstrations, though they succeeded in stopping a second anti-immigrant proposal, were insufficient to bring about a more definite solution: amnesty. Many analysts point out that politicians from both parties will most likely not revive the issue until after the 2008 Presidential elections. Nonetheless, beneath the apparent calm during this ebb in the struggle, tremendous tensions remain. Without a doubt, there will be those in the state apparatus who will use the raids to advance their political agenda, while the most reactionary politicians and the media will continue to whip up racist anti-immigrant hysteria.

Until now, these forces have been unable to counter the weight of the immigrants’ rights movement. We must therefore learn from our own experience and take the initiative, instead of merely reacting. We should pass to the offensive in alliance with the rest of the working class to fight in the interests of all workers. The only solution is for the working masses to be organized and mobilized, armed with a program of class independent struggle. Only by organizing in our factories, neighborhoods and schools can we break this situation of inhuman limbo. Only in this way can we achieve full rights and amnesty for all immigrant workers and their families. Equal rights for equal work!

We can expect an increase in the ICE raids, a tool used by the ruling class to defend their interests. On the one hand, they terrorize immigrant workers, causing panic in the streets, workplaces and schools. On the other hand, the raids contribute to the media campaign which portrays immigrant workers as criminals. Nonetheless, these tactics, which are in effect a form of state terrorism, have limits. It is only a question of time before panic is converted into rage.  It is only a matter of time before the cruelty and violence of the raids brings out among millions of documented workers a tremendous feeling of solidarity and class unity.

In the coming months, immigrant workers and their allies will be confronted with a tremendous challenge: to respond massively to the raids and go on the offensive. It is therefore urgent that activists across the country organize a national day of action against the raids to show that they are not having the desired effect; that on the contrary, they are inflaming our rage. This is the only way to stop the raids! We must show that their attacks only strengthen our resolve to struggle!

The phenomenon of mass immigration from Latin America is the direct result of the economic and foreign policy of U.S. imperialism. The same people who go on and on about the sovereignty of the country could not survive a single day without the natural resources and cheap labor they squeeze from the poor countries of the world, which in turn forces millions to emigrate to the U.S., only to find even more misery and exploitation.  The capitalists care only about profits, destroying entire countries, ecosystems and  cultures in the process.

The ideas of Marxism, the detailed study of the struggles and experiences of the world working class, are more necessary now than ever. The working class can advance only insofar as it organizes around its own class interests.
It is time to go on the offensive – for a national day of action against the raids!  Mobilize on the streets to demand full rights and amnesty for all! Organize in factory, neighborhood, and school committees to prepare the mobilization! Join the Workers International League and the struggle for socialism!