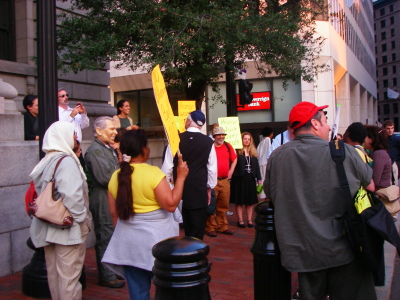 On Wednesday October 1st, there was a small protest action held outside of the U.S. Federal Court in downtown Providence, Rhode Island, which the WIL intervened in.  Only a few days prior to this, Jobs with Justice (JWJ) had called for demonstrations throughout the country in those cities where they are active. However, even with such short notice, around 40 to 60 people turned out to the protest.

JWJ had printed a large number of fliers to hand out prior to the protest at an adjacent bus terminal (Kennedy Plaza), which is a busy location with many workers and students. The JWJ fliers had some brief facts on the bailout with a call for people to telephone the RI State House switchboard with messages of protest. A few people did call on the spot, although there were many others who expressed something along the lines of: "Why call them?  They are part of the problem!" – referring to the Democrats and Republicans.

The WIL also combined the JWJ flier with our own flier on the economic crisis.  We also sold several copies of Socialist Appeal and took the chance to draw out the class nature of the economic crisis and bail out, which was exceedingly easy since most workers and students present had already begun to draw a lot of these conclusions on their own. Several interested people left their contact info behind after buying copies of Socialist Appeal.

Demonstrations like this will happen again and again as the economic crisis continues. For revolutionaries, it is necessary to take part in these actions and present a real revolutionary, class alternative.  There will be many attempts, even good intentioned ones, to turn this struggle into the folds of the Democratic Party, but the Democrats stand together with their Republican cohorts, siding with big business time and time again.

Workers and youth, in particular, will be looking for real perspective of change, revolutionary change. The capitalist system is not a system that can be reformed for workers, but rather, it must be done away with, by the working class itself coming to power: that is to say, Socialism!