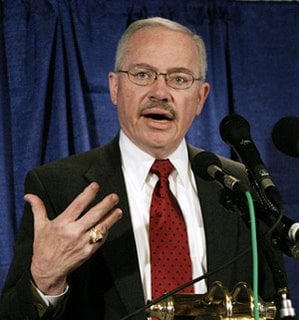 "Is Senator Obama 'socialist?' Yes, he wants to 'spread the wealth,' as he puts it. But that's what the Republicans have been doing for the last eight years. We already have 'big government,' 'socialism,' or whatever else you want to call it—and it was Republicans who gave it to us."    -Bob Barr

Anger continues to boil over about the nearly one trillion dollar bailout of the banking industry. It's no surprise, then, that there is a growing ear for populism of the far-right. Many working people are very confused about where the system "went wrong" and are looking for someone to "fix it." Third party figures of the right, such as Bob Barr, Chuck Baldwin and Ron Paul, claim to have the solutions. They generally recognize that the current crisis is a result of the building of the world's economy on mountains of speculation and debt with little real value behind it. What they are incapable of understanding, however, is that the capitalist system itself is what compelled industrial capitalists and their financial twins in the banking industry to build ivory towers on a heap of sand. Instead, they blame immigrants, individual bankers, and Big Government with its "greedy big business" friends. This misdirection is sometimes difficult to discern, but with the current economic downturn, it is vital for us to understand it.

One of the first things to look at to understand this phenomenon is what these rightists are calling themselves. There is a general claim of the emerging right-wing populists that they represent a kind of "libertarianism." Of course, this isn't libertarianism in any meaningful sense, i.e. the idea that we should have a completely unregulated market and little or no government at all. Genuine libertarianism is a utopian fantasy. Capitalism is a system that is inherently unstable and will always need a general fund of "socialism for the rich" when they run into trouble. In fact, they have been using the government to line their pockets since capitalism's origin. The only reason people are noticing it now is because of the staggering amounts of money involved.

Actually, the present Barry Goldwater-style "libertarianism" is essentially the opposite of everything it pretends to stand for. For example, in place of the already tightened "border enforcement" we currently have, a Baldwin administration would:

On free trade, a fundamental aspect of the Libertarian idea, an article by the Cato Institute entitled, "Is Bob Barr a Libertarian? Certainly Not on Trade," points out that he voted.

* Numerous times to uphold the trade embargo and travel ban against Cuba.

* Against lower tariffs on goods imported from Caribbean and Sub-Saharan African countries.

* In favor of quotas on steel imports

And Ron Paul, for all his bluster against the loss of democratic rights and the growth of war under Bush, has stated in no uncertain terms his opposition to abortion rights, adoption by same-sex couples, and his support for military intervention in Afghanistan.

So they aren't Libertarians. So what? Leaving aside labels, let's look at how these policies would affect us. One of the big lies of the populist right is that immigrants are U.S. workers' enemies and that they take their jobs. The truth is that the only reason immigrants are denied citizenship in the first place is to lower the wages and conditions of work for all workers. The capitalists and their state will never halt immigration entirely. They need a fearful and obedient pariah underclass to work for close to nothing to both increase their own profits and to compete with "native" workers. This is why unconditional legalization and opening of the borders is so necessary for the labor movement here in the U.S. Only fighting together can we increase unionization, make working conditions better and increase the pay of all workers.

What about increasing tariffs on foreign goods? Won't that protect "our" market here in the U.S. from foreign interests? The answer is no, again. These aren't "our" markets as working people, and the capitalists, who do have a stake in the continued existence of these markets, only want to institute or increase tariffs in order to increase profit for their own manufacturing goods at the expense of foreign capitalists' goods. Working people in both countries would lose as native U.S. workers would be forced to compete with our Chinese brothers and sisters for the lowest common denominator of manufacturing wages. Again, the "free market" offers us more pain, not less. 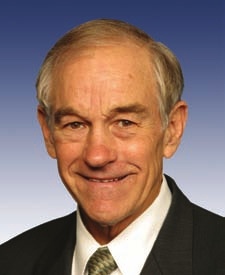 And what about social programs? Aren't they just "giveaways to the lazy"? Well, actually, the largest "giveaways to the lazy" are continually bestowed upon big business. No politician can withstand the pressure of their own bond-holders, campaign-financers and "job-creators" collapsing in the face of crisis. We just watched some of the most ardent "defenders of the free market", including "W." himself, nationalize nearly the entire financial sector. How could this happen? It's because all politicians that seek to defend the capitalist system, including "Libertarians" like Ron Paul, will be forced to carry through a program that, in the last analysis, is a reflection of the interests of the capitalist class as a whole… under pain of decelerating investment, capitalist sabotage, and even military coup. Not for nothing was the First Brigade of the Third Infantry Division of three to four thousand soldiers deployed ahead of the second bailout vote. This was a stern warning to the right-wing "free-marketers" to get on board. Only a new kind of government, based on the power of organized labor, can create a system where giveaways to the rich can't happen and charity to the poor won't be necessary.

What workers in this country need is a Labor Party, based on the unions and armed with a socialist program. Until we organize a party that works for our interests instead of the interests of the rich, labor will be hamstrung. As capitalism hurdles toward utter collapse, a Labor Party can be the starting point in the fight against growing joblessness, poverty and racism, increased hours of work, endless war, and for better conditions on the job. A party like this will also give us an edge when we wage strikes and organize unions.

But even this will not be enough, ultimately. We will need to go further and nationalize the country's productive and consumptive capacity under a plan democratically decided by our nation's working people. While the capitalists own that which we produce and control the state that we live under, they will always be able to dump our gains into a sea of capitalist loopholes and trickery. We have political democracy. Why not some economic democracy then? It's time for a fundamental change and a "socialism from below" run by working people. There's no other way for working people to fight the effects of the economic crisis.