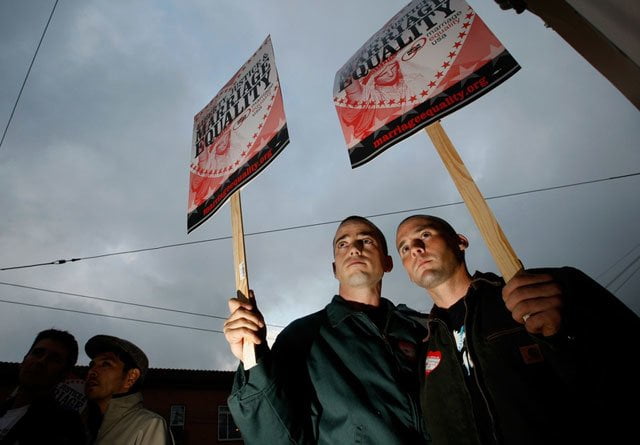 In June 2008, the first legal marriages between same sex couples were performed in accordance with a California Supreme Court ruling a month earlier. These ceremonies were held in jubilant triumph and celebration, marking a forward advance in civil rights. This victory came after decades of struggle, agitation, elections, demonstrations, speak-outs and lawsuits. Advocacy for legal recognition of same sex relationships, has, for several decades, been a goal of LGBTQ (lesbian, gay, bisexual, transgender, queer) rights organizations.

This victory, however, is quite fragile and under attack. In November 2008, Proposition 8, which aims to repeal same sex marriage, will be on the ballot in California. The success of Prop. 8 would be a set back for everyone who fights for equal rights for all.

Prop. 8 is an attack orchestrated by phony “Protect Marriage” organizations. This attack on this new social advance serves as a distraction from the devastating effects that the recession and the long occupations of Iraq and Afghanistan are having in the U.S. These backward political groups instead try to focus people’s attention on the “destruction” gays and lesbians are supposedly foisting on society. Most working people are under tremendous pressure.

The cost of living goes up faster than our wages and many of us are in debt, with sky high credit card interest rates. Some are looking for work and those of us who have jobs fear having our hours cut or being laid-off altogether. Big Business politicians must therefore try their best to distract workers from these fundamental problems.  Gays, lesbians, the transgendered and bisexuals are convenient and longtime scapegoats.

As socialists we are against all forms of discrimination and are against marriage discrimination. We believe in the old labor slogan, “An injury to one is an injury to all.” Not surprisingly, on this, as on so many other issues, both the Democratic and Republican Parties are united: both strongly oppose legalizing same sex marriages. The two parties of capitalism differ only in how to most effectively deny gay people their rights at the lowest political cost to themselves.

The Democrats have adroitly and skillfully opposed or stalled every major demand of the gay and lesbian movement for decades.  One only has to recall their long opposition to domestic partnership, civil unions before marriage, or the “Don’t Ask, Don’t Tell” law Clinton enacted (after promising to end the gay exclusion), a law that has led to more LGBTQ evictions from the Armed Services than before its enactment. Needless to say, the reactionary Defense of Marriage Act was signed into law by President Clinton in 1996, a low point of gay scapegoating.

Obama is no exception to this type of politics.  While calling himself the candidate of “change,” this is what he wrote, responding to a questionnaire from the Human Rights Campaign, a gay rights lobby, “However, I do not support gay marriage. Marriage has religious and social connotations, and I consider marriage to be between a man and a woman.” So much for sí se puede!

Catering to the same religious prejudices as the Republicans, the Democrats are completely unprepared to extend the social and basic democratic right of civil marriage to same sex couples. Civil marriage is a historic advance over the church having exclusive control over who may and who may not be married.

Socialists oppose special privileges based on religious prejudices. Civil marriage should be a right for all regardless of gender. The bosses fear and dread social equality. They and their political agents try to use the politics of scapegoating and division as a way to stop the working class from uniting to fight for a better life, which means challenging their system.  When that doesn’t work, they argue for limited, “reasonable” partial reforms to divert the logic of the struggle for equality.

The labor movement and the working class in general have nothing to gain from restoring marriage discrimination.  It is in the interests of the labor movement to join the LGBTQ community at the forefront of the fight against marriage discrimination. The fight in California against Proposition 8 will present an opportunity to fight backward prejudices. We urge a resounding “no” vote to defeat this reactionary legislation.