St. Paul, Minnesota Says: No to Electoral Fraud in Mexico

At 11:30 am on Friday, July 14, some 20-25 people gathered at the Mexican Consulate in St. Paul, MN in solidarity with the international appeal of Militante in Mexico. El Militante Sin Fronteras organized this picket to protest the electoral fraud being perpetrated in Mexico and to support the massive rallies taking place this weekend.

Chanting slogans such as “No al Fraude!” and “Voto por voto! Casilla por Casilla!” – a call to count every vote – the protesters received many honks of support from passing drivers – despite some dirty looks from obvious supporters of the PAN.  The orderly picket continued until the Consulate called the police, at which time, the crowd dispersed without incident.

Those who participated felt it was an excellent event, especially given the short notice.

All eyes are on Mexico as the masses converge on the zocalo and take to the streets to demand that 2006 not be a repeat of the great fraud of 1988. We await with great anticipation the next steps of the Mexican working class, and congratulate the comrades of Militante for their excellent work in helping to build a network of neighborhood committees to defend the vote.  We also thank them for their international call for pickets at Mexican embassies and 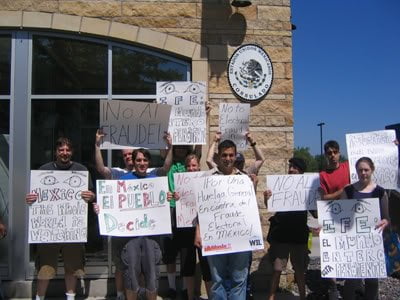 consulates – many at the St. Paul picket commented that they were excited to be part of something truly international.