The Growth of the DSA and the Fight for Socialism 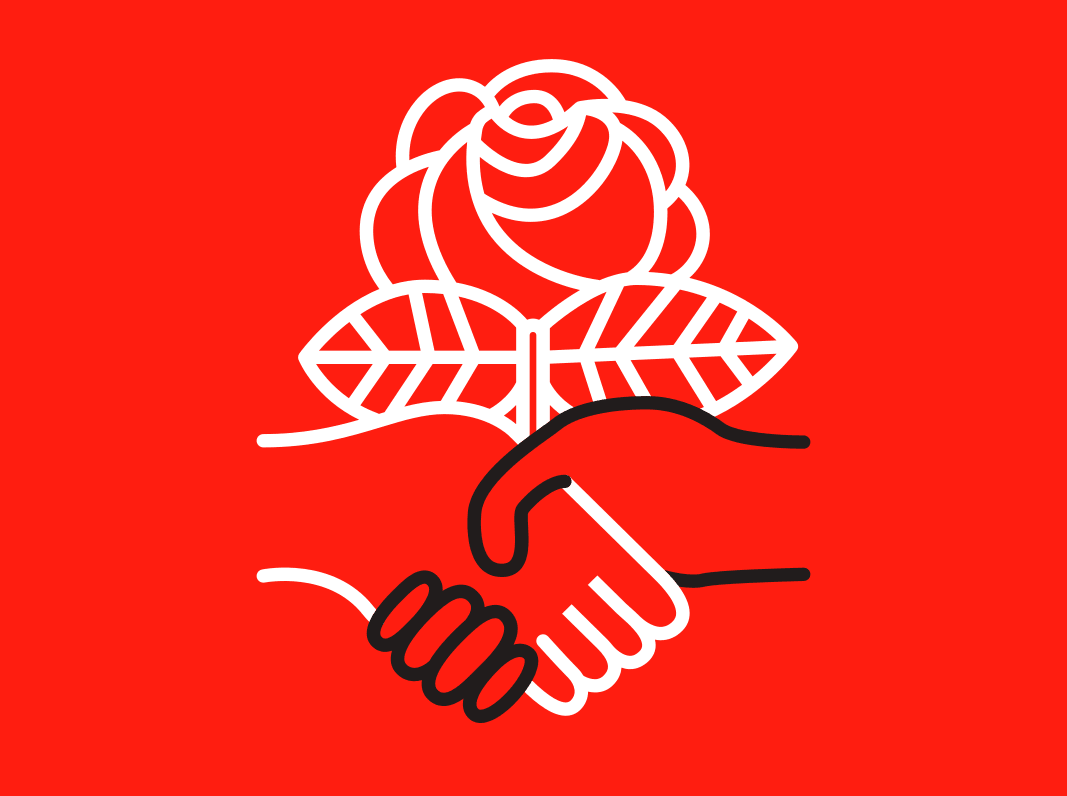 This article was first published in July 2017, in the lead up to DSA’s National Convention, which was held in August. The convention was a resounding success, and among other decisions, DSA has taken the important step of disaffiliating from the misnamed “Socialist” International. Since then, the growth of DSA has only accelerated, surging past 25,000 and growing by nearly 10% in the weeks following the convention.

By all measures, 2016 transformed the political landscape in the US. After years of following the ebbs and flows of the explosive and inspiring, yet politically amorphous, eruptions of Occupy and Black Lives Matter, it appears socialists are now finally swimming with the stream.

At its height, the Sanders campaign mobilized millions and rallied broad layers of society, particularly the youth, around the banner of democratic socialism. For a moment, the potential for the emergence of a new party—a mass socialist party—became a concrete prospect. No longer was this a hard-to-imagine abstraction—if only Bernie would break with the Democrats! However, his capitulation to Hillary and the DNC, while it threw away a historic opportunity, did nothing to quell the mood of resistance, especially as the Trump era opened.

In this context, the explosive growth of the Democratic Socialists of America is an exciting development. Seeking to build an alternative to the horrors of capitalism, thousands have joined DSA in recent months, swelling the organization from some 6,000 to 23,000 members since the election. DSA is heading to its convention in Chicago this August, where many important issues are going to be discussed. This is a time for socialists to clarify the objectives of our movement and learn the lessons of history—there is a lot at stake!

Inside and outside of the Democrats?

In order to fight for a workers’ government with socialist policies, the working class needs its own party. Can the Democrats be this party? In our view, this is ruled out. Once the party of the Southern slavocracy, the Democrats today are tightly controlled by the capitalist class, through money, media, and political machines. Any time a socialist has run as a Democrat, far from taking over the party, they have become tools and hostages of the enemy class who must adhere to the Democratic Party leadership or face its wrath.

Part of the process for the working class coming to power is the development of class consciousness. In other words, it must understand that it is a class with its own interests, separate from and opposed to those of the ruling class  The establishment of a workers’ party, independent from the Democrats, Republicans, Greens, etc. is a key step in this process.

The labor leaders have been telling the workers to vote Democrat for decades, and for decades this brought limited results. To stave off revolution in the 1930s, the Democrats were forced to give some concessions to the working class. In the 1960s, on the basis of the post–World War II boom, they also made some concessions. But since the 1970s, the Democrats have not delivered the goods and their support among the workers has fallen.

When Nancy Pelosi blurted, “We’re capitalist, and that’s just the way it is!” she was only admitting what was already sensed by the millions who see the Democrats as a party of capitalists. As if more proof were needed, the defeat of Jon Ossoff in Georgia’s 6th Congressional District after a $33 million campaign by the Democrats, and the California Democratic leadership’s last-minute maneuver to kill the single payer bill “Healthy California” have undoubtedly convinced many more that this party is fighting against us, not for us. Socialists should take heart that events are leading millions to draw such conclusions, since this clarifies priorities and prepares the way for the critical task of building something new.

We need a mass socialist party of the working class

In a country as large and populous as the US, we need mass forces to seriously challenge the parties of big business. This may not happen now, but momentum is building for such a break to take place, either when the Democrats sell out even further to Trump or when they return to power and yet again implement capitalist austerity. You can’t reap where you haven’t sown, and the sooner we plant the seeds for the future the better.

The building of a mass party is a complex task and can only be realized through a combination of objective opportunities and conscious preparation by committed and trained socialist cadres. Despite the exciting growth it has seen, DSA is not yet large enough to build a mass party. But what socialists do today can put us in a position to change the course of history in the future.

DSA could help advance this process today by breaking completely from the Democrats, neither supporting any of its candidates as “lesser evils,” nor running DSA members as Democrats. And by calling on Bernie Sanders, Our Revolution, and any labor leaders who will listen, such as the National Nurses Union, ILWU, and the Electrical Workers Union, to break with the Democrats and build a mass socialist party, DSA could help left elements within these organizations chart a road forward.

Socialist Revolution agrees with DSA’s support for campaigns to the left of the Democrats, like Jabari Brisport in Brooklyn, New York, who is running for City Council on a Green Party ticket. It is excellent that DSA is working to get Jabari on the ballot on a DSA line as well, which would allow people to vote for a socialist candidate as a socialist. We also support DSA’s efforts around other independent socialists running against the parties of big business, such as City Council candidate Ginger Jentzen in Minneapolis and other similar efforts. These efforts can serve as a platform from which to raise the need for a mass socialist party and a revolutionary policy.

For a revolutionary socialist program!

In the context of the crisis of capitalism, there is no solution within the system. Only a workers’ government committed to the socialist transformation of society can lead us all to a better life. This would include nationalization of the top 500 corporations, to be administered under democratic workers’ control and management. This handful of companies accounts for 75% of US GDP. Along with massive cuts in the military/CIA/NSA budgets, there would be plenty of money for healthcare, education, housing, infrastructure, and to tackle the environmental crisis facing humanity. There is no other way forward, as the experience of Left governments around the world has shown over and over again.

In Greece, in 2015, SYRIZA won the elections and formed a national government opposed to the Troika and austerity—but then refused to lead the working class to power. This meant they had to manage the capitalist crisis, and this led them to betray their own program and to implement austerity. In 2012, we saw how the French Socialist Party elected François Hollande and then took a majority in the National Assembly and the Senate. Once again, reforms were promised, but they refused to transform society.

As managers of capitalism, the Socialists did not give reforms, but rather, austerity, and then passed a vicious anti-labor law to make French capitalism “more competitive” with international capital. The French Socialist Party reaped the benefits of their betrayal: their candidate Hamon got a mere 8% in the recent presidential elections, and they have lost most of their seats in the legislature. Many similar recent and historical examples can be provided.

Even when minor concessions can be wrenched from the capitalists, the system is dying and can no longer give meaningful or lasting reforms. Socialists must remember what Rosa Luxemburg said: the choice is socialism or barbarism! It is clear that many DSA members are serious about changing things and are fighting to build an organization committed to socialism.

The whole of the Socialist International is social-democratic, and in times of capitalist crisis, this means austerity, as it remains strictly within the confines of what is possible on a capitalist basis. At least one DSA resolution calls for disaffiliation, to be replaced with country-by-country, bilateral relationships with organizations such as Momentum in Britain, Podemos in Spain, and the PSOL in Brazil. These organizations reflect the same process of radicalization that underlies the dramatic growth of DSA.

Disaffiliation from the misnamed “Socialist” International would clear the way for DSA to help build a genuine socialist international, starting with a mass workers’ party in the US, and by seeking links with left parties around the world. The struggle for socialism must be international, or it is nothing. Capitalism has established an international division of labor, and socialism must be built on the foundation of capitalism’s highest levels of development. This means that to succeed, socialists must commit to the building of a world party of the working class. The International Marxist Tendency is working towards this goal in more than 40 countries, and we would join with any other socialists committed to a serious attempt to build such a party.

The need for Marxist theory

Some people think that theory is something separate from political activity. However, for revolutionary socialists, Marxist theory is an indispensable guide to action The idea of engineering a bridge without a profound understanding of physics, mathematics, and building materials would seem absurd. So why should we just “wing it” when it comes to politics?

The capitalist class controls the media, academia, and the political structure. This establishment is a constant source of pressure on socialists to bend us to its interests, and against the needs of the working class. Marxist theory represents the generalized experience of working class struggle and its efforts to win political and economic power. It is a powerful tool for both understanding and changing the world. Lenin once wrote that without revolutionary theory, there is no revolutionary movement. Only through a firm grounding in theory can we collectively resist the pressures of capitalist society and build a mass socialist party and movement.

For decades, the IMT has been swimming against the stream to defend Marxist theory and to develop the political perspectives and organizational methods that will enable the workers and youth to win political power and build socialism. Now the tide of history is turning, and thousands of Americans are looking for socialist ideas.  The road separating us today from the socialist transformation of society may seem daunting, but we are confident that we will see revolution in our lifetimes. Socialists must prepare for this through united activity and theoretical education. We are committed to working alongside all those who are serious about fighting for a socialist future.

For a mass socialist party of the working class!

Bernie Sanders, Our Revolution, and labor leaders: Break from the Democrats and build a mass socialist party!

For an international party of the working class to end world capitalism and imperialism!