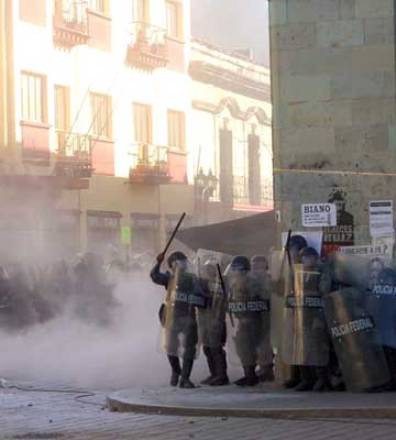 We are all too familiar with the horrible injustices committed by the Mexican Government and its police force. Members of the Asamblea Popular del Pueblo de Oaxaca (APPO) have suffered from the brutality of the infamously corrupt Mexican Federal Preventative Police (PFP). Many have been unjustifiably imprisoned while others have been “disappeared” and are now feared to be dead. Falsified drug charges are so common among political prisoners that they have become the fingerprints of the “long arm of the law” in Mexico. Armed with the knowledge of the counter-revolutionary tactics being used, we will take a brief look at the “Merida Initiative,” also known as “Plan Mexico,” due to its similarity to the infamous “Plan Colombia.”

The Merida Initiative is a plan in which the U.S. government would give $1.4 billion to the Mexican and Central American governments to help fund their police and military forces, ostensibly in order to wage the “war on drugs.” In a February 7 open meeting of the House Foreign Affairs Subcommittee on the Western Hemisphere, representatives of the FBI and Homeland Security, among others, testified to the necessity of the Merida Initiative. In their testimonies, they described Mexico as a lawless country filled with drugs and gang violence, whose police force was an essential tool in the wars on drugs and terror.

Congressman Dan Burton of Indiana expressed frustration at the progress being made in the so-called “war on drugs,” and said that the only way to win was for the U.S. and Mexican police to join forces. The increased powers given to the FBI and other American police agencies under the pretense of fighting terror already has many U.S. citizens living in fear. And now the government wants to further increase the jurisdiction of the FBI into Mexico, and also give thugs like the PFP access to U.S. wire-taps?

Congressman Burton later went on to accuse Venezuelan President Hugo Chavez of smuggling guns into Mexico! When Burton asked Anthony Placido, Chief of Intelligence at the Drug Enforcement Agency, how the U.S. can be sure that these “drug-running criminals” aren’t arrested one day and back on the streets the next, Placido replied by saying that the Merida Initiative would “increase the ability of the prisons to humanely incarcerate and warehouse prisoners.” Just how can a human being be “humanely warehoused”?

Thomas Shannon, an assistant to the Secretary of State, stated: “Democracy is under assault by the Mexican drug cartels.” As socialists, we know that this is a mere excuse to intervene more directly in Latin America. The rampant violence of the drug cartels are a reflection of the decomposition of Mexican society. For these people, “democracy” is just a code-word for “the interests of U.S. imperialism.”

The example of Plan Colombia, which has in effect transformed that country into a giant military camp, with government-backed paramilitaries murdering trade unionists and peasant activists in order to enforce the rule of the pro-Washington government, demonstrates that the Merida Initiative is a threat to millions of ordinary men and women both in the U.S. and across Latin America.