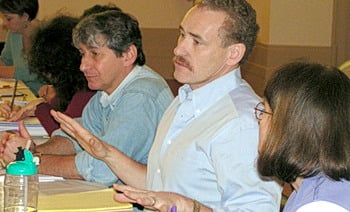 It appears Oregon is being specially targeted by the national federation this year as part of a $53 million union dues-funded drive to "educate" people on getting out to vote for the Democrats. The state is in for an onslaught of organized labor like it hasn't seen in a while. As Chamberlain put it, "I don't know about you, but I'm ready for a fight." Unfortunately, this "fight" consists of removing Republican Senator Gordon Smith from office, and replacing him with a "friend of labor" attorney Steve Novick (D) or Oregon Speaker of the House Jeff Merkley (D).

As we all know, it takes a lot of money to run a campaign these days, and to that end, the state federation has decided to levy a tax on membership to generate $300,000 to support Democratic candidates. A special "Unity Team" of 15 union officials will be created to lead organizing campaigns. Merkley asked the audience to imagine what could be accomplished with a Democrat-controlled Congress, but passed over the fact that the current majority they have in Congress voted for the October 5th Iraq War funding requested by President Bush, condemning thousands more Iraqis and Americans to death and dismemberment. To end the Iraq War, Congress could simply cut off funding. To cut funding would bring the troops home. In fact, the only representative from Oregon to vote against the funding was Republican (!) Greg Walden. Not to mention the fact that countless anti-labor laws remain on the books, millions are still without heath care, the public schools remain badly under-funded, and on and on. What's the point of having a majority in Congress if they refuse to do anything with that power? It is clear that workers in Oregon will not have an "aggressive" 2008 if we continue to subordinate our interests to the Democratic party.

John Edwards and Dennis Kucinich tried to woo Labor with some sweet talk about how their presidencies would benefit workers, mainly outlining various protectionist policies. Edwards had a perfect $300 hair cut as he tried to highlight the fact the he's the son of a union mill worker from North Carolina. He currently earns in excess of $3 million through lucrative investments. Kucinich railed against free trade, which he said, "was about cheap labor, I know that." He promised to pull out of NAFTA, the tariff-reducing agreement with Mexico and Canada that encourages business to migrate where labor costs are cheapest (Mexico). Then again, Democrat Bill Clinton, the husband of Hillary, also promised workers that he was completely against NAFTA only to embrace it with all of his being once in office. The documentary, "Commanding Heights", by Daniel Yergin has excellent coverage of this slithery Clintonian "flip-flop" (Complete with a dark-room meeting with big bankers!).

The bottom line is, these two Democratic hopefuls stand for capitalism, as does the whole of the Democratic Party in whose 2004 platform we read: "We will make it a priority to knock down barriers to free, fair and balanced trade so other nation's markets are as open as our own." Just how these barriers are knocked down is well-documented. Under president Clinton's guidance, Yugoslavia's barriers came down under the heavy barrage of missiles.

Dennis Kucinich, however, is for protectionism, that is, raising taxes on foreign goods to protect the domestic market. But protectionism offers no solution for working people. Let us remember that the Great Depression was exacerbated by ratcheting up tariff barriers. From 1929 to 1932 the monthly value of world trade dropped from $2.858 billion to $1.122 billion, unemployment skyrocketed, and it took the government expenditure associated with World War II to pull the country out of the slump. Protectionism leads to higher prices which also represents an upward redistribution of income. 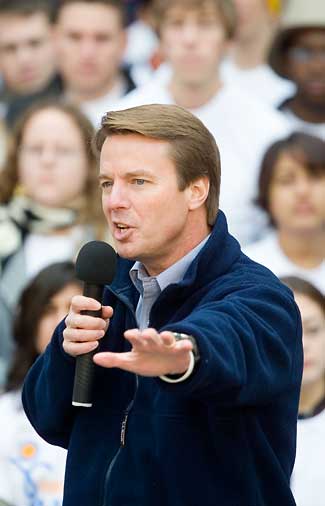 As for John Edwards, he is for "fair trade," that is, trying to persuade capitalist firms to accept lower profits in deference to the workers. But the whole history of capitalist free trade shows that this is Utopian. Companies scour the globe searching for the lowest bidder, and the World Trade Organization (WTO) is only useful as long as it works in favor of big business. Globalization means putting each country's workers in competition with those of every other country to make "their" industry more competitive. A graphic example can be seen in the auto industry, whose workers are being made to compete with Latin American and Asian workers who are paid far lower wages. The pivot of capitalism is profit. Profits and wages are in an inverse proportion to each other, and that is the root of the class struggle. The class struggle is global, and therefore calls for international working class solidarity. Hence the slogan "Workers of the world, unite!"Neither protectionism nor the fantasy of "fair trade" can show us the way forward.

Edwards and Kucinich have achieved differing, both in size and composition, levels of campaign support over their careers. OpenSecrets.org, a finance watch group, reports that during the 1989-2006 election cycles political action committees (PACs) for business interests have contributed 68.9 percent of Edwards' donations versus 19.2 percent from labor. The pattern is reversed for Kucinich, who garnered 12.5 percent of his money from business interests, and 77.8 percent from Labor. Edwards, with the support of big business is the only serious contender of the two, while Kucinich will be characterized as "unelectable" and written off by all the "opinion shapers," Democrats first and foremost. Kucinich's real role is to serve as window dressing to make it appear that workers can find a voice in the Democrats, while the real shots are called by the party's big campaign contributors – corporate America.

Both candidates do support the Employee Free Choice Act, which would allow "card check" union recognition, as well as some murky form of "universal health care." Kucinich, the "unelectable," co-authored HR676, which would expand Medicare to everyone. The "electable" Edwards has a plan similar to Hillary Clinton's which would subsidize the insurance industry. These, however, are only token concessions aimed at keeping labor subordinated to the Democrats. What little is given with the left hand is taken back with interest with the right on all other major policies.

This convention was an interesting look at those Democrats, both at the state and national level, who claim to be "pro-labor". But the real priority for "Aggressive Labor 2008" should not be the removal of Gordon Smith, himself one tiny cog in the two party system, but the removal of our unions from its unholy alliance with the anti-working class Democratic Party. The AFL-CIO must break with the Democrats. Workers need a mass party of labor based on the unions. To that end we should keep an eye on the newly created Reconstruction Party in New Orleans, which looks to have a promising working class orientation.