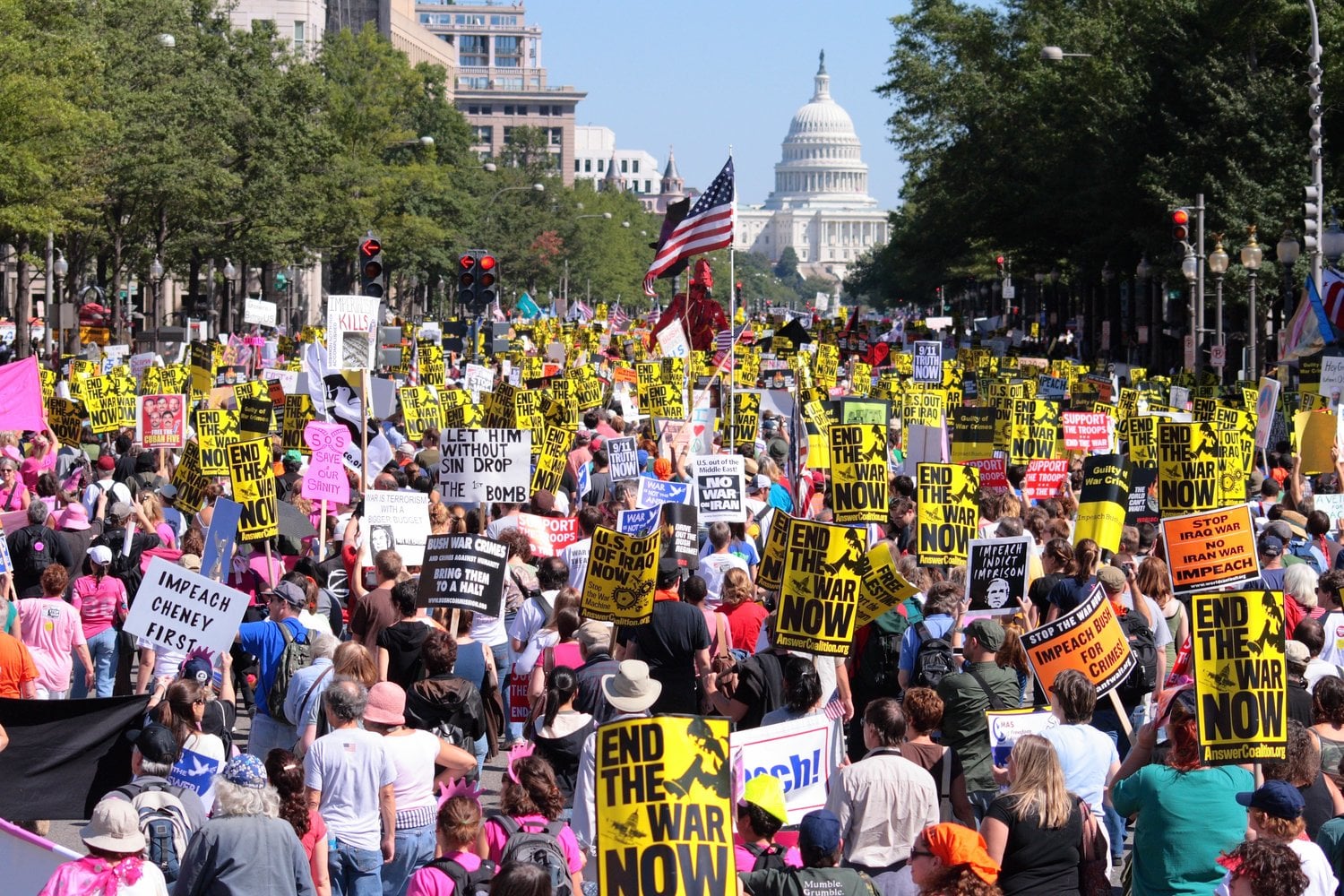 As the occupation of Iraq approaches its grim fifth anniversary, the anti-war movement finds itself at an impasse. The two major national anti-war groups, United For Peace & Justice (UFPJ) and Act Now to Stop War and Racism (ANSWER), will not be bringing their forces together to build the largest possible event to oppose the war – again.

ANSWER had proposed that all anti-war forces, including UFPJ, come together in a broad coalition to build a nationally focused anti-war demonstration in DC on Saturday, March 15th. UFPJ announced that they would instead be building what they hoped would be the largest non-violent civil disobedience action in DC on Wednesday March 19th, the anniversary of the war. To her credit, Cindy Sheehan attempted to bring ANSWER, UFPJ, and others together in a movement-wide united coalition to take joint action in March. However, the UFPJ steering committee backed out saying, “It was not clear how being part of another coalitional structure would help move all this work forward.”

Iraq Veterans Against the War (IVAW) was also opposed to ANSWER’s call for a united national demonstration. They felt such an event would detract from the impact of their Winter Soldier Investigation taking place in DC between March 13th and 16th. This event will focus on eyewitness accounts from Iraq and Afghanistan veterans to publicize the truth of these occupations’ impact on the peoples of those countries, the American soldiers and their families, and the U.S. as a whole. No doubt, Winter Soldier promises to play an important role in establishing IVAW as a reference point for all anti-war soldiers as well as the general public. But it is unfortunate that IVAW has come to the conclusion that a mass demonstration would diminish the national attention paid to Winter Soldier. If anything, it would appear that a mass demonstration would provide the best possible opportunity to heighten the profile of this event and IVAW as one of the most compelling voices in the broader anti-war movement.

Without a doubt, these continuing divisions are a source of disappointment for the majority of rank and file activists. Though there are important advances being made, especially among veterans and active duty troops, the anti-war movement is currently at an ebb. Demonstrations have been large but nowhere near their potential size and frequency given the unpopularity of the occupations. This can partly be explained by such factors as war weariness, the relative decline in American soldiers’ deaths, as well as working people being preoccupied with just hanging on as the economy heads towards a likely recession.

However, given the continuing widespread disapproval for the Iraq occupation, the most decisive factor for the decline in mass anti-war activity can be attributed to the divisions in the movement. While there are always competing political perspectives in any mass movement, the repeated failure of the national anti-war organizations to unite in mass demonstrations around the basic demands of the anti-war movement – “End the War Now! Bring All the Troops Home!” – has come at the cost of failing to realize the movement’s potential power and, consequently, prolonging the death and misery.

The strategy of getting people off the streets and into the voting booths to elect Democrats, which is being advocated by many in the leadership of the movement despite that party’s solidly pro-war record, also weakens our potential power. Take for example the experience of the anti-Vietnam War movement. Mass activity declined during presidential election years, but in the final analysis, all the energy expended campaigning for the various supposedly anti-war candidates did not contribute one bit to ending the war.

This was the case in 2004 and 2006, and should this happen again in 2008, we will lose valuable time toward building the momentum that can end the occupations of Iraq and Afghanistan. We should instead expand our organizing on the streets, in our workplaces, schools, and in the barracks, independent of the big business politicians.

Given the different strategies counter-posed by UFPJ and ANSWER for the five-year anniversary of the war, comparing the merits of mass civil disobedience vs. mass demonstrations towards realizing our aims warrants examination.

UFPJ’s call for mass civil disobedience feeds to some degree from a mood of impatience among some peace activists that has left them looking for more “confrontational” tactics to substitute for systematically building mass demonstrations. It is a forgone conclusion that any call for mass civil disobedience will draw out only a fraction of what a mass march and demonstration would if all the major peace organizations were on board. UFPJ’s proposal in effect aims to substitute the actions of the anti-war “choir” for the process of painstakingly reaching out to and organizing the millions who stand on the brink of joining the anti-war movement. Without pulling in all sectors of society who have a genuine interest in stopping the war, the anti-war movement is weakened regardless of how “confrontational” its tactics are. Without relying on our power in unity and numbers, even the most disruptive actions pose no real threat to the corporate interests responsible for the continuing nightmares in Iraq and Afghanistan, and the politicians that do their bidding.

The problem is not that mass demonstrations don’t work. The problem is that they have not been pursued seriously enough because of the divisions in the movement. Despite the overwhelming unpopularity of the Iraq War, which is around where it was at when the U.S. government was forced to pull out of Vietnam, the level of activity and the numbers involved in demonstrating and organizing are far lower than when the anti-Vietnam War movement began to rattle the capitalist politicians’ confidence in their ability to continue their war without risking an upsurge at home.

In order to evaluate the effectiveness of mass civil disobedience vs. mass demonstration it is useful to look at a page from the anti-Vietnam War movement. In 1971 the Peoples’ Coalition for Peace and Justice (PCPJ) had proposed mass civil disobedience in DC between May 2nd and 5th. The National Peace Action Coalition (NPAC) had proposed a massive demonstration on April 24th. After trying to find a way to work together, eventually both PCPJ and NPAC realized that their projects were incompatible and essentially agreed to stay out of each other’s way.

What were the results of these two different events? The mass civil disobedience action drew out no more than 15,000 people, with 12,000 arrested. The press was almost universal in its condemnation of the PCPJ activities and tried to use them as an example of how out of touch the peace movement was with American opinion. Many, if not most of the people involved were so demoralized that they simply disappeared from anti-war activity shortly thereafter.

In contrast, the NPAC broad-based anti-war demonstration drew out over half a million people in DC and 300,000 in San Francisco. Comparing these two actions, Fred Halstead wrote the following in his excellent account of the Anti-Vietnam War Movement Out Now!:

How many new forces were involved in antiwar activity as a result? How many minds were opened? How many minds were changed? How many young men facing the draft attended this demonstration, or heard about it, and what effect did this have on the armed forces? How many GIs participated, or saw the demonstration, or heard about it, and what effect will that have on them, and even on battles in Vietnam? How many workers participated, or watched, or heard about the demonstration, and what effect did it have on their attitudes toward the demonstration’s attempts to get them to sacrifice for the war? Will they be more or less inclined to accept a wage freeze, for example? More or less inclined to strike in their own interests? More or less inclined to back up GIs who oppose the war? I concluded that from this point of view the April 24 and the immediately preceding veterans’ actions [Dewey Canyon III, throwing campaign medals on the Capitol steps] were “tremendously effective,” while the effectiveness of May 2-5 in Washington was “questionable.”

Experience is always the best teacher.  It would do today’s anti-war movement good to learn from the experience of the anti-Vietnam War movement when evaluating our tactics and strategies.

The WIL continues to support the call for a mass, national mobilization of all anti-war forces as the best way of getting across the message: “End the War Now! Bring All the Troops Home!”

In the meantime, we will work energetically to help publicize and build all national, regional, and local anti-war actions that take place, including IVAW’s Winter Soldier Investigation in order to highlight the role of the soldiers in stopping the war.