The Struggle Against Women's Oppression 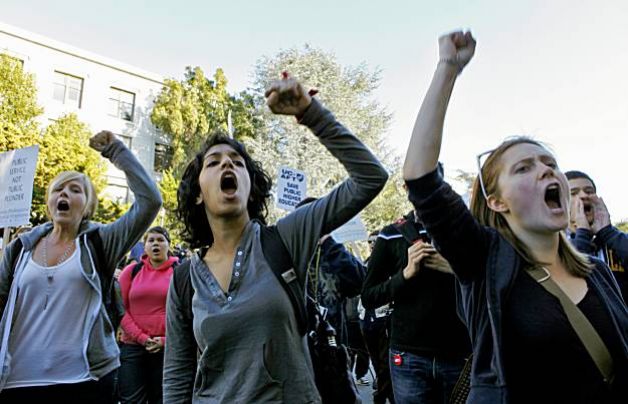 t is often said that sexism is a phenomenon of the past—there are more women in the work force than ever before and many other gains have been made in recent decades. Yet the pay gap between men and women in the US remains around 20%, and women are still expected to carry out the majority of domestic duties such as cleaning and taking care of children.

The past century has seen many strides forward for women, as many more have entered into higher education, pursued careers, and gained the right to abortion and divorce. However, we must recognize that women remain a doubly-exploited group—as both workers and as women.

A brief look at the history of the 20th century shows that more women entered the labor market as a result of the changing needs of capitalism, and that this process played a role in the driving down of wages as the two-wage family became the norm. For many women, this has been far from an emancipating experience, as they have more often than not been forced into the more precarious sectors of the economy, while being paid even less than their male counterparts.

Despite the modernization of relationships and attitudes towards sex, this has far from ended oppression of women in this realm; it has simply changed the form. New social expectations mean that instead of women being pigeon-holed as “wife” and “mother,” they are now expected to exhibit sexual behavior or else be labelled a “prude”—but not too much—or else a woman risks being labelled a “slut.”

Increasingly strong sexual imagery and sexual expectations have led to the rise of a culture in which women are seen as sexual objects, and sexual violence—including rape—is seen as a joke.

The question of the origin of women’s oppression is one which is rarely tackled seriously. It is therefore of the utmost importance that we understand where this oppression comes from, as on this basis, the link between class society and the oppression of women becomes clear.

Women’s oppression is one of many forms of oppression—including racism, homophobia, and more—which arises from a society based upon the class exploitation of the many for the profits of the few. With this understanding we can also develop ideas on how to fight women’s oppression. Clearly, this involves fighting for every reform and basic democratic right, but even that is not enough.

As explained in Friedrich Engels’ masterpiece, The Origin of the Family, Private Property, and the State, the oppression and degradation of women has not always been present throughout human history.

The earliest form of human society is referred to by Marxists as “primitive communism,” as the low technological level meant that people had to work together in order to meet their basic needs, and there was no significant surplus produced from which to profit off the labor of others. During this stage, which lasted hundreds of thousands of years, the work of men and women was divided according to gender. For biological reasons, such as the need to breast feed and carry the baby to term during pregnancy, women played the primary role in the collective raising of children, and hence, their role in food production was based mainly around gathering close to the home, while the males often hunted further afield.

Women were not viewed as inferior to men and their status was aided by the fact that families were traced through the mother line, since without marriage as a social norm it was impossible to be certain of a child’s father.

The Neolithic (“New Stone Age”) revolution brought with it higher quality stone tools and the domestication of animals, which, for the first time in human history, allowed for not only basic needs to be met, but also for the creation of a surplus. The creation of a surplus led to the early beginnings of class society, as it was now possible for some in the community to accumulate more than their neighbors, eventually leading to distinctions between rich and poor. As some began to amass more and more wealth, they forced others to work for them, leading eventually to the rise of classes and the state.

This process led to women being seen as inferior to men in society, as it was by the work of men that the majority of the movable and transferable wealth was now created. The creation of a surplus also led to the traditions and laws of inheritance. The greater status and wealth of men meant that families were now traced through the male line, which necessitated the enforcement of female monogamy. Here we see the origins of marriage.

Female oppression began in the embryo of class society, and as it developed into the system of capitalism, the oppression of women became more complex and ingrained.

With socialism will come the end of all of the many forms of oppression used by the capitalist system, including those faced by women. This will all be achieved through the guarantee of work for all, alongside a general reduction in working hours, giving each worker more free time to spend as he or she chooses, including time to care for families.

As childcare would be socialized, women would not have to choose between having children and working. No worker would have to face any form of discrimination or oppression based on his or her gender, sexuality, or marital status. This, along with equal generous maternity and paternity leave, and an education system emphasizing equality (including gender equality), would aid in fighting against sexist attitudes in society.

We cannot simply wash away the institutionalized oppression through gender quotas in the boardroom or “real beauty” campaigns by cosmetics giants. We can’t expect the capitalist powers-that-be to fight in the interests of women; it is only through a socialist economic system that we can lay the basis for full and genuine equality.

Violence against women, harmful societal attitudes, denial of access to education, and many other forms of discrimination must be fought against, and the labor movement must be at the forefront of this struggle.

As we have demonstrated, capitalism, exploitation, and oppression are intricately linked. All forms of discrimination derive ultimately from class oppression. Therefore, in order to seriously tackle any one of these forms of oppression, we must also fight against capitalism.