The war in Vietnam, which completely transformed the situation in the U.S.A., did not begin in a planned way. The U.S.A. was sucked into it almost by accident. It began with a covert operation, the sending of officers and “advisers” to prop up an unpopular and corrupt government against its own people. This is the usual style of U.S. imperialism! The regime of Ngo Dinh Diem was guilty of vicious repression in South Vietnam. Buddhist monks burned themselves alive in protest. Finally, Diem was assassinated by his own generals.

Three weeks later, the President of the U.S.A. suffered the same fate. Kennedy was succeeded by his Vice President, Lyndon B. Johnson, who immediately announced that he was “not going to lose Vietnam”. “Win the war!” was his clear instruction. But despite all its tremendous wealth and military firepower, the U.S.A. did not win the war. On the contrary, Vietnam was the first war America ever lost. Korea was a draw. But in the steamy jungles and swamps of Vietnam, the Americans suffered a bitter defeat at the hands of a barefoot army.

In order to step up its military activities in Vietnam (as usual) an incident was required. This was (as usual) manufactured in the so-called Bay of Tonkin incident. It was alleged that a U.S. warship, the Maddox, had been fired upon by North Vietnamese naval vessels in the Gulf of Tonkin. For years it was believed that the U.S. navy had been the target of unprovoked “Communist aggression”. That was completely untrue. Even at the time, the captain of the Maddox admitted that none of his crew had made “actual visual sightings” of North Vietnamese naval vessels, and not one sailor either on the Maddox or the Turner Joy had actually heard North Vietnamese gunfire. The opening of the Hanoi archives has proven conclusively that the North Vietnamese did not fire on the American ships, which were actually inside Vietnamese territorial water at the time. Yet the American public was persuaded to back a foreign war on the basis of false information – and not for the last time, as we know.

The very next day Lyndon Johnson ordered the bombing of North Vietnamese naval bases and an oil depot. It was the start of a huge campaign of bombing that caused havoc in Vietnam, killing a large number of civilians and destroying its industry and infrastructure. On television, President Johnson declared: “Repeated acts of violence against the armed forces of the United States must be met not only with alert defense but with positive reply. That reply is being given as I speak to you tonight.” (Quoted in Jeremy Isaacs and Taylor Downing, Cold War, p. 216.)

There was not a word of truth in any of this. Johnson and co. had decided to send U.S. troops to Vietnam and that was that. In the same way, George W. Bush and his friends decided long before 11 September to invade Iraq and lied through their teeth about the alleged weapons of mass destruction that were supposed to pose a deadly threat to American security to sell it to the public. 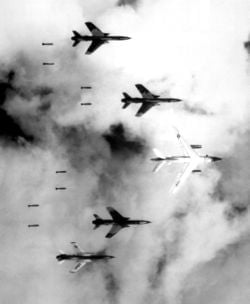 In the years that followed, high explosives, napalm and cluster bombs rained down on Vietnam. The U.S. Air Force dropped toxic chemicals, including the notorious agent orange on forests, allegedly to kill the vegetation and deny shelter to the Vietnamese guerrillas. A total of 18 million gallons of herbicide were dropped. Even today U.S. servicemen are dying from the effects of just handling these toxic agents, especially cancer. One shudders to think of the effects they had on the Vietnamese men, women and children on whom they were dropped. Tests have shown that the South Vietnamese have levels of dioxin three times higher than those in U.S. citizens. It will take many years to flush these toxins out of the fragile ecosystem. This was chemical warfare pursued with a vengeance!

In all, the U.S. dropped more tons of explosives on Vietnam than were dropped by all sides in the Second World War. After bombing one village to rubble, one U.S. officer was quoted as saying: “We had to destroy the town in order to save it.” They are still “destroying towns in order to save them” today. Ask the inhabitants of Fallujah. And the tactic of dropping tons of poisonous chemicals still continues in Colombia, where herbicides are being used in the so-called war against drugs. The damage to people, vegetation and wild life will be the same as in Vietnam. But nobody talks about that.

The name of this particular operation was “Rolling Thunder”. There must be somebody in the Pentagon, some frustrated poet, whose sole function is to think up picturesque names for such acts of barbarity. Lately we had “Operation Shock and Awe”. It is a pity such talented people were not around at the time of the fall of the Roman Empire, or Attila the Hun might have called his activities: “Operation Sweetness and Light”. No matter what the name was, it did not succeed. Once an entire people stands up and says “no!” to a foreign invader, no amount of troops, guns, bombs or chemical agents will make any difference, as George W. Bush will learn to his cost in Iraq. The Vietnamese continued to resist. More and more U.S. troops had to be sent in and more and more body bags were being flown home.

The suffering of the Vietnamese population will never be fully known. Apart from the huge number killed and maimed, the war caused many other human casualties. The relentless bombing, shelling and defoliation drove tens of thousands of peasants from the countryside to the outskirts of the big cities where they lived in humiliating poverty. The traditional structures of Vietnamese village life were shattered. Young girls became prostitutes for the U.S. soldiers.

A drug culture flourished, which later fed back into the cities of the U.S.A., with devastating results. In 1971 the Pentagon calculated that nearly 30 percent of the U.S. troops in Vietnam had taken heroin or opium, while smoking marijuana was commonplace. Attempts to stamp out the drug trade met with the opposition of the South Vietnamese puppet regime, which was heavily involved in it. That was an indication of the rottenness of the regime the U.S.A. was trying to prop up.

By the end of 1967 the U.S. was spending $20 billion a year on the Vietnam War, which contributed massively to a balance of payments deficit of $7 billion. By the end of 1968, the number of U.S. troops in Vietnam was over 500,000. Towards the end of the war, the U.S. troops in Vietnam were completely demoralized. They understood the situation, that they were fighting an unwinnable war. The Vietnamese were fighting a just war of national liberation, while the U.S. army was a hated army of foreign occupation. In any army there is an element of killers and sadists, and in such a situation atrocities and brutality against civilians became routine. Eventually, these horrors became known at home, with the massacre at My Lai among the most infamous. The supposed moral justification for the war was blasted to pieces – just as in Iraq today. 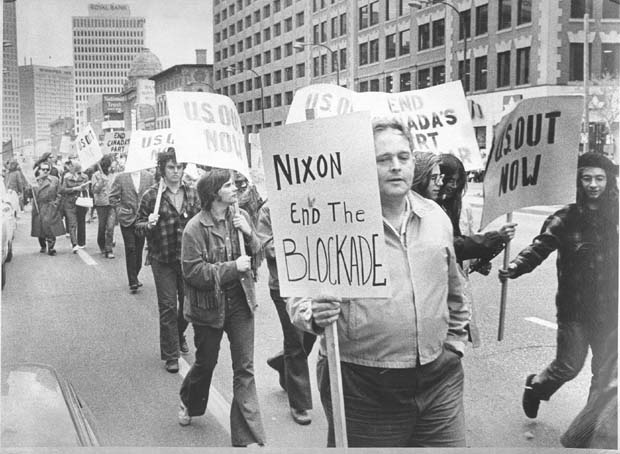 In January 1968, President Johnson announced that the U.S.A. was winning the war. This was immediately blown apart by the Tet offensive. The Vietnamese mounted simultaneous attacks in more than a hundred cities. In Saigon a sapper unit even managed to penetrate the U.S. embassy compound. These events were shown all over America on the television screens to a shocked public. This cruelly exposed the fact that for all its military might, the U.S.A. had not succeeded. The war finished Johnson’s political career. Richard Nixon, the Republican candidate, defeated L.B.J.’s Vice President Hubert Humphrey in the Presidential elections of November 1968.