Wendy Davis and the Race for Texas Governor 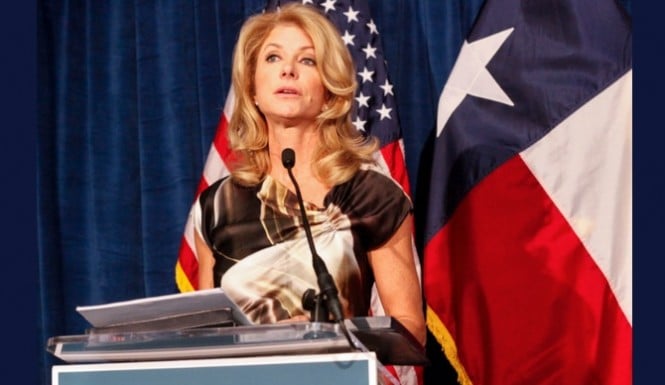 On November 4, Texans will go to the polls as part of the nationwide midterm elections. The headline race is for governor, chiefly between Republican Attorney General Greg Abbott and Democrat Wendy Davis. Davis has risen to national prominence in recent months and is seen by many as a “progressive” politician to be supported and emulated. In reality, however, she is another classic example of a “lesser evil” Democrat, the “left boot” of the capitalists’ political set up. In her own words, she “proudly worked across the aisle” with her Republican “foes.”

Capitalist party candidates appeal to workers as a cynical maneuver to win votes and stir up populist support—not because they seriously mean to remedy workers’ many deep problems under capitalism. Greg Abbott is a comfortably wealthy person. Wendy Davis works for a title loan company, which insures wealthy proprietors against future claims against them and their properties following a sale. These are wealthy clients, and Davis used her positions in government to enrich herself in open, legal corruption. As Ft. Worth City Councilor, she won tax incentives for a relocation of RadioShack corporate headquarters. Her now ex-husband’s title insurance company was the same one that closed the deal with RadioShack. At the same time, as she was profiteering on city business, she posed as a friend of poor workers living in Section 8 housing displaced by her deal. She also used her position to change the bidding process for the hiring of third-party law firms in negotiating freeway construc­­­­­tion projects—then got her own company hired on for just such a project.

Davis also supported current Governor Rick Perry’s “border surge” to repress immigrant workers and youth attempting to enter the US. Both Davis and Abbott praise the hard work of the proletariat and offer false promises about increased access to a piece of the pie—while also making much more credible promises to their partners in business.

Davis rose to fame on the basis of an ultimately failed filibuster to stop the passage of a harsh anti-abortion law. Demonstrations by working class and leftwing activists played a key role in the initial success of this stalling action. However, if we want to do more than ward off the worst of the Republicans (and Democrats), we will require more than demonstrations. We need a party of our own—a mass party of labor based on the strength of the trade unions, the program and perspectives of the Marxists, and the militancy of the unorganized masses. Such a party could coordinate legislative and protest action on a hitherto unimaginable scale across the state in a working-class movement that moves beyond the promises of limited half-reforms coupled with reinforcement of the status quo of austerity. Without such a party, we fight with one hand tied behind our back, forced to use partial means and fight for partial demands.

GOP cuts seem awful compared to Democratic cuts and promises of a minimum wage of $10.10 an hour. But given the extraordinary amount of wealth being created daily for the rich by the mostly poor, paycheck-to-paycheck proletariat, these promises fall flat. The minimum wage in 1968, adjusted for inflation, would today be about $11 an hour. Workers’ incomes have not kept pace with either inflation or with productivity, which would put wages higher—about $22 an hour. Thus, $10 is really a promise to continue paying workers less in order to maintain the huge profit margins of the big companies—companies like local defense industry giant Lockheed Martin.

While the Republicans and Democrats offer nothing on par with what is really needed and attainable, the “third” parties are not better options. The Libertarians offer up even bigger attacks on workers’ rights and base themselves on petty-bourgeois fantasies about free markets and small government, while the Greens offer a utopian vision of social-democratic reforms impossible without the organized might of the working class and a conscious fight for socialism. The Greens also base themselves on small business owners and routinely run such characters for office. Only the Socialist Workers Party is running a socialist campaign—yet they are a tiny sect with virtually no support.

We cannot place our hopes in the false promises and two-faced hand-me-downs of the bourgeoisie and their petty-bourgeois political helpers—the big developers, manufacturers, banks, railroads, energy, construction, retail, and services companies, their attorneys and paid-for politicians in local and state government. We also can’t expect tiny groups or protests, or even a movement which remains incohesive, to make a revolution.

To fight for and win socialism in America, we must break with the mentality that workers must support capitalist parties. Not a single vote, not a single penny for any capitalist candidate!

The recent election of a handful of socialists and independent labor candidates across the United States is a sign of the times. Texas is not just a state of working people without their own party—it is a state ripe for a fresh and militant mass workers’ movement. It is true that Texas has a powerful capitalist class, with 51 of the Fortune 500 companies based here. But the 13-million-strong working class is even more powerful. This is why Texas is fertile ground for a labor party and the ideas of socialism. Join the IMT in Texas and the fight for a socialist future.