Where is Your Rebate Check Going? 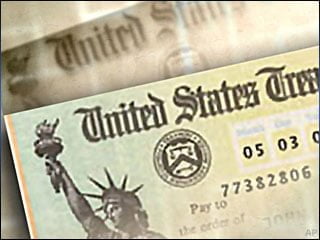 Many U.S. workers have now received economic stimulus checks, generally receiving $600, with another $300 per dependent child.  The government and media have touted these checks as a way to increase consumer spending and help repair an economy in recession.  But where is the money from these checks going?  Is this money, which was created by the working class in the first place, increasing our living standards?

Surveys indicate that many recipients plan on spending just 20 to 40 percent of their rebates on new purchases. The rest will go into savings accounts or toward paying off debt.  According to The National Retail Foundation, 17 percent of recipients plan on spending the money solely on necessities such as food and gas. To attract more spending, some retailers are offering discounts to those who spend the checks in their stores.

These stimulus checks can only provide minor, temporary relief at best.  In fact, according to an index compiled by the New York-based Conference Board,  a research group, consumer confidence hit a 16-year low on May 27th. The problems facing working people are bad enough as it is, and only promise to get worse.  Workers are forced to spend a larger percentage of their income on basic necessities than before, as evidenced by drops in sales of cars, electronics, and clothing. Robert Shiller, an economist at Yale University, has complied data that reveals that house prices are falling faster now than they were during the Great Depression.

We are just at the beginning of a recession. Long-term joblessness is at a cyclical high, and the Federal Reserve has reported that lending criteria from banks has become increasingly strict.  According to The Economist, the credit crunch could be far from over.  A May 13 article in The Telegraph ominously warns of an unfolding global recession.

Capitalism is outmoded and is no longer capable of playing the historically progressive role it did over 100 years ago.  The capitalists will continue to cut our living standards to improve profitability.  Only a democratically planned economy run by the workers themselves can guarantee a high standard of living for all, free from the anarchic booms and slumps of the capitalist market.

If you agree with us, consider joining the WIL and / or donating a portion of your rebate check to help us continue to spread the ideas of Marxism.