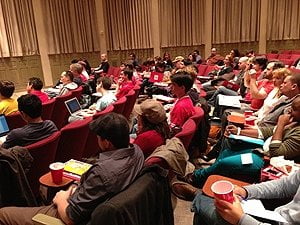 The 2012 National Congress of the Workers International League was held on the weekend of November 10 and 11 in Pittsburgh, Pennsylvania. The enthusiastic meeting marked an important step forward in the development of the forces of revolutionary Marxism in the United States. As this year marks the 10th anniversary of the organization, the Congress was a fitting launching pad for for taking the WIL to both a quantitatively and qualitatively higher stage of development.

Nearly 60 were in attendance at the two-day meeting, which took place on the campus of the University of Pittsburgh. Among those in attendance were comrades and sympathizers from New York City, New Jersey, Boston, Philadelphia, Minneapolis-St. Paul, St. Louis, Madison, Northern California, Los Angeles, Salt Lake City, Cleveland, and Pittsburgh, as well as visitors from the Canadian section of the IMT, in addition to comrade Alan Woods, editor of Marxist.com.

The first day was kicked off by opening remarks and greetings to the Congress from IMT sections around the world, a real inspiration to those of us fighting in the “belly of the beast.” This was then followed by a discussion on World Perspectives, led off by comrade Alan Woods. Summarizing the entire world situation in just one hour is an increasingly impossible task. Alan focused on the big picture of the crisis, with particular emphasis on Europe, the Middle East, and the United States. As was the case with the rest of the Congress the introduction to the discussion was followed by a high level of discussion, with contributions ranging from the parallels between the decay of Roman and feudal society and modern-day capitalism, the role of China in the world economy, the progress of the Arab Revolution, the situation in Greece and Spain, the Quebec students’ movement, and more.

The discussion on World Perspectives was followed by a lead off on the U.S. Perspectives by comrade John Peterson. With the presidential elections having taken place just a few days before the Congress, the discussion was very concrete. John outlined the economic situation facing the United States, in the context of the world economic crisis of capitalism. He gave an overview of the state of the labor movement, as well as insight into the situation faced by students and youth under capitalism. He also discussed the significance of the Occupy movement, and above all, emphasized the perspectives for a rapid rise in working class militancy and interest in revolutionary ideas in the U.S. in the coming months and years.

John explained that Obama’s reelection solves nothing fundamental, and that only a labor party armed with a socialist program could lay the basis for changing society. The many interventions by comrades in the discussion that followed further fleshed these ideas out, and the U.S. Perspectives document was officially adopted by the Congress. We invite our supporters and sympathizers to read it and to join us if you support the ideas laid out in it.

Comrade Alan Woods then gave a brief report of the work of IMT comrades internationally, which served as a morale booster and a reminder that we are not alone, but fighting shoulder to shoulder with comrades in nearly every corner of the globe, many in very difficult and dangerous conditions. Every success of the comrades of the IMT is a success for the comrades of the WIL, and vice versa!

The day was closed by the opening of our winter Fighting Fund financial collection. Last year at our national school, our goal was to raise $10,000, which we surpassed. This year, the goal was $12,000. At the Congress itself, this target was surpassed by over $1,000 in pledges from those in attendance, and does not yet include the contributions that will be coming in over the coming months from comrades and sympathizers who weren’t present. The WIL’s financial independence is what ensures our political independence – we have no rich backers and receive no money from foundations or any other NGOs. We are funded 100% by our members and supporters.  If you would like to make a contribution, no matter how small, please consider doing so!

That night, the attendees gathered at a comrade’s home for delicious homemade food and an assortment of beverages. It gave comrades the opportunity to meet others from across the country and get an idea of the work of various branches. Throughout the weekend, the Pittsburgh branch worked hard to ensure everyone had plenty of good food and comfortable accommodation. At the party, several hundred dollars were raised in beverage sales and donations towards the Fighting Fund collection.

Sunday was opened up with a discussion on the WIL’s Organizational Resolution, led off by comrade Tom Trottier, including brief reports on the finances and press by Dana Cooper and Mark Rahman respectively. The consensus of the delegates was clear: the WIL must continue to build campus student clubs; recruit, educate, and consolidate new members in the theories and methods of Marxism; and continue raising the need for a mass party of labor based on the unions. All the proposed draft Congress documents were passed with just a few amendments.

After lunch, there were two short sessions, the first of which focused on youth and student work, led off by Josh Lucker, and the second focusing on Trade Union work and our continued work with the Campaign for a Mass Party of Labor, led off by David May. Many practical experiences were shared and both discussions served to highlight the importance of our work in these two key areas.

A new National Committee was elected, and the congress was ended with closing remarks of comrade Alan Woods. He spoke of Trotsky’s heroic struggle to build the Fourth International against all odds, and emphasized the importance of the struggle for socialism in the United States and the urgent need to continue building the forces of Marxism. To adjourn the meeting, the Internationale was sung with great enthusiasm.

The Congress was an overwhelming success and the Pittsburgh comrades did an excellent job for their first time hosting such an event. Alan Woods, in his closing remarks, made the point that this Congress will be looked back upon as a historical landmark in the history of the Workers International League. Forward to the next ten years of the WIL!

If you would like to get involved with the WIL and the struggle for socialism, contact us!