100 Years Since the Ludlow Massacre of Striking Miners in Colorado 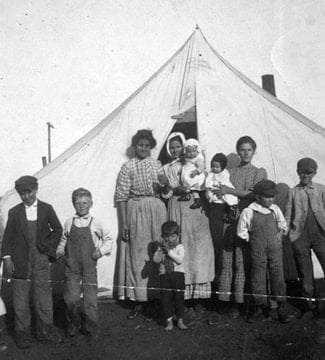 100 years ago, US mining magnate John D. Rockefeller, with the help of the Colorado state government, ordered Colorado National Guard and militia forces to machine gun on a mining camp where 1,200 striking coal miners and their families were residing. Up to 60 people were killed and hundreds injured. The strikers were mainly immigrants who were paid slave wages by the company. They were forced to work 10–12 hour days and were not paid for “dead work” such as clearing the mines of rubble. The event marked a key milestone for America’s working class struggle to gain workplace rights, including the 8-hour work day, workplace health and safety measures, better housing, and the right to form a union.

Under capitalism, workers do not receive the total value they create while at work. The capitalist extracts surplus value from the workers’  labor in order to form and increase his profits. The greater the extraction of surplus value, the greater will be the profit. To increase the rate of profit, the capitalist must exploit the worker through various means, including extending working hours, slashing wages, decreasing benefits,  not investing in health and safety measures, and above all, discouraging workers from forming trade union and political organizations to fight for their collective economic and political rights.  Workers can bear the oppression up to a certain point; but eventually they are forced to take action.

The first organized industrial actions in Ludlow and other neighboring mines occurred in 1903, when workers across several mines in Colorado went on strike with the help of local communities. But the movement was put down when the company’s executives employed strike breakers. John D. Rockefeller was living 2,000 kilometers away from the mines in his palace-like house.

To isolate the miners and their families from the community, the company supplied them with houses in really bad conditions. The houses were unsuitable to live. The workers were demanding the recognition of  United Mine Workers of America union (UMWA), enforcement of Colorado’s laws on mine safety, and an end to the company militia system. The miners also demanded to be paid a living wage and the 8-hour day. Their salaries were taken back through various means by the bosses, leaving nothing for them to send back to their families. With the workers’ own money, the company management was maintaining a company militia mainly consisting of scabs and strike breakers from the 1903 strike. Workers also demanded that the company allow them to live outside the company premises.

The miners went on strike in September 1914 after their demands were not met. Over 13,000 miners and their families moved out of the poorly made houses into primitive tents on land loaned to the strikers by sympathetic ex-miners.

After the company management badly failed in negotiations and in all their tactics to employ strike breakers and scabs, they cordoned off the tent colony and ordered the Colorado National Guard and company militiamen to open fire indiscriminately with automatic machine guns—a car loaded with machine guns was circling around the colony and constantly firing into the tents and houses.

The workers hid behind any object they could. They dug out trenches to protect women and children. In the end, 60 people were dead, including 11 children and 2 women. People died in the massacre from bullets, falling off of houses, suffocation in trenches, and fire. Nothing was done to prosecute company or state officials and Washington, DC sided entirely with the capitalists.

The latest brutal incident was in 2012 at the Marikana mine in South Africa, which resulted in the brutal killing of 44 miners by special police contingents. As always under capitalism, the state protected the perpetrators and did nothing to resolve the grievances of the miners.

Workers’ rights are not god-given or the result of charity or sympathetic action by a benevolent capitalist. These rights have been fought for and won through decades of working class struggle against the capitalists.

Miners have always been at the forefront of these struggles. Even the simple demand for the implementation of basic health and safety measures took decades of working class struggle, and in the meantime, innumerable incidents occurred in which thousands of miners lost their lives. For example, the Courrières mine disaster in France in 1906 claimed 1,099 lives including many children; the 1913, Senghenydd mine disaster claimed 436 lives; the Hartley Disaster in 1962 claimed 204 lives; the Oaks Explosion in 1966 claimed 380 lives;  and the worst one yet was the Benxihu accident in 1945 in China, which  claimed 1,549 lives. To this must be added the countless deaths due to slow gas poisoning, black lung, and other health-related problems.

Today, in the aftermath of the 2008 global economic crisis, austerity is seen as a useful tool to force the working class to pay for the crisis of capitalism. After creating the economic crisis, the capitalists, including the bankers, forced governments to bail them out to the tune of trillions of dollars worldwide. Now, they are attacking workers’  rights and driving down the living condition of billions of people.

Technology has reached such astonishing levels that we practically don’t need humans to do the labor-intensive and dangerous work of mining. We can employ robots and do it without destroying the environment. But the profit motive prevents technology from fully reaching the mines, and instead, humans as used like modern-day slaves to work in mines around the planet.

Unless and until this profit-based system is rooted out and replaced with socialism, the condition of the working class will never get better. In this struggle, we can find inspiration in the heroic efforts of the Ludlow miners to improve their lives against all odds. The best way to pay tribute to these working class martyrs is to bury capitalism once and for all.