Over 60 comrades and contacts from New York, New Jersey, Boston, Philadelphia, Pittsburgh, Greensboro, NC, Toronto, Montreal, Greece, and Switzerland all participated in the highly energetic 2015 Northeast Regional Marxist School. There were many contacts present as well, one even coming all the way from North Carolina.

The Saturday session of the school ran from 2:30 to 5:30. Comrade Orestis Doulos of the Communist Tendency of Popular Unity in Greece, and Comrade Ele Wild of the IMT in Switzerland presented a co-lead off on the crisis of European capitalism and the perspectives for revolution.

Comrade Orestis provided a detailed illustration of the crisis of Greece as an organic development of the crisis of overproduction in the European and world capitalist system, with the bourgeois class now attempting to transfer the cost of the crisis to the working class via the imposition of austerity. The European troika and core institutions of the EU, elected by no one, has been forcing governments to accept bailout packages on condition of making cuts in public services. In Greece’s case, the country’s position as the weakest link in European capitalism also meant that the crisis hits there first. The severity continues to escalate. While the working class in Greece is increasingly conscious and militant, it looked to the left reformist party, Syriza, to fight austerity on their behalf. The Marxists fully expected Alexis Tsipras to submit to bourgeois pressure with his reformist policies, and he indeed did towards the end of 2015. The Greek section of the IMT, called the Communist Tendency, has now joined the Popular Unity, a left split from Syriza, and is doing the patient work of recruiting ones and twos to build a strong Marxist cadre organization in Greece in preparation for the revolutionary situation that is sure to be descending upon Greece and elsewhere in Europe and the world in the coming years. 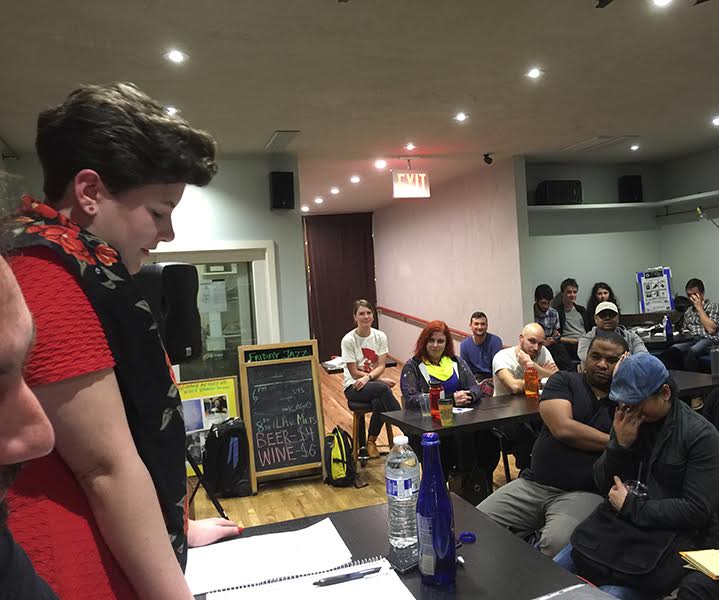 Comrade Ele Wild introduced the school to Switzerland, a pivotal place for the European and world bourgeois as the place to stash away their wealth. The country is run by a seven-member federal council, which is beginning austerity policies against the Swiss working class, also as a result of overproduction and inefficiency of the free market. While the crisis in Switzerland is not yet at the level of Greece, it is telling that the IMT Swiss section grew swiftly in the past few years, and has been able to play a leading role in the Socialist youth organization in the country. This shows that the prospect of a collapse is being felt by the youth, and we with our strong theoretical foundation and correct organizational method are winning over the young workers of Switzerland.

The discussion was supplemented by further contributions from comrades including perspectives from France, China/Taiwan, Canada, Britain, as well as engaging discussions on what is to be done moving forward. As an embryonic tendency organization, the IMT will continue the patient work of recruiting quality comrades to prepare a strong cadre for the unfolding world crisis. 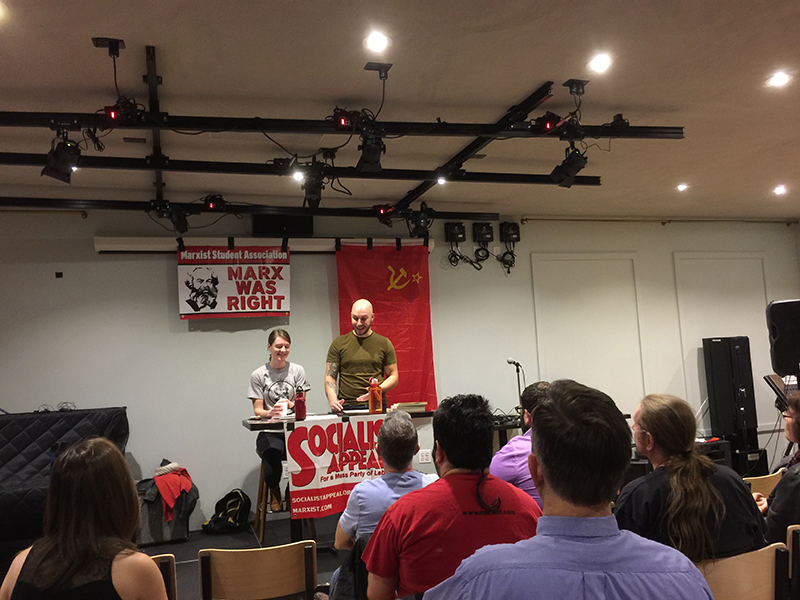 Sunday’s session kicked off with Comrade Mark Rahman’s introduction on the origins of Empiricism and Pragmatism and their relationship to Marxist Dialectical Materialism. Empiricism and its American variant, Pragmatism, developed out of the progressive era of capitalism and contributed to the development of science and technology. But as time went on they reached their limits and became increasingly limited outlooks for understanding the tendencies of social developments. Marxists do not dogmatically reject formal logic, but understand that they are a basic tool that must be supplemented by the more powerful and all-encompassing philosophical method of dialectical materialism.

The lead off was supplemented by excellent contributions on topics such as dialectical materialism, the limits of the modern bourgeois academy, examples of pragmatism that led to failures, and more. The session was energetic and interesting, and ended with a lunch break. During the lunch break, comrades shared their experiences in building the IMT in various countries and the growing interest in Marxist ideas. 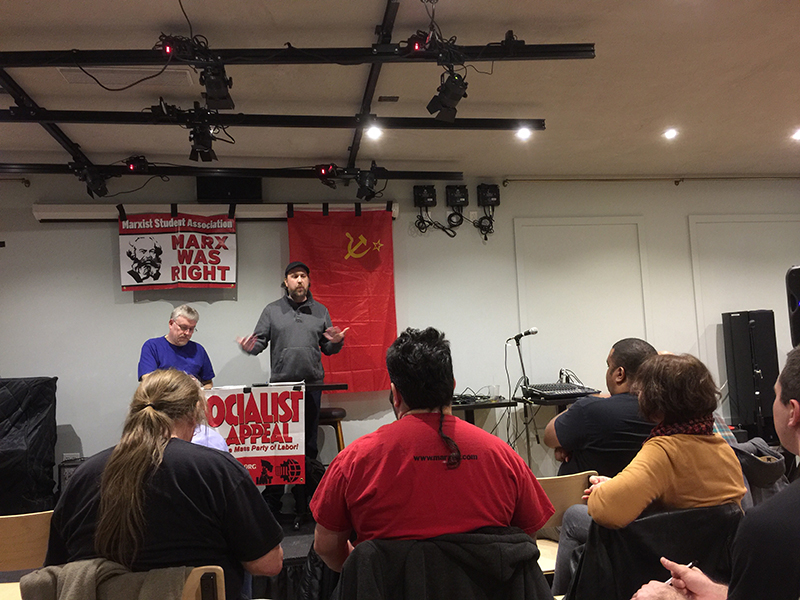 After lunch, the school reconvened with the final session of the school led by Comrade Rob Lyon of Canada on the question of worker’s control and what socialism will look like. While we are not able to offer a ready-made blueprint for how a worker-controlled economy will function exactly, we can understand certain principles that it needs to follow in order to successfully transform society and end classes. Localized workers’ control without worker’s state ownership is limited and cannot alone succeed in transforming society, as it will only lead to divisions of workers and eventually the resumption of capitalistic practices. A complex modern economy creates mutual interdependency, throughout a nation and the entire world.

Experience shows that during a revolution, the workplaces will organically be taken over and operated by workers, but the new worker’s state must own the means of production and coordinate them according to a democratically administered economic plan. The Russian Revolution was disadvantaged by the backwards material conditions and isolation of Russia at the time of the October Revolution, which forced it to endure many difficulties it was eventually strangled by the Stalinist bureaucracy that arose as a result of those conditions. The material conditions are now far more favorable and we should have a much smoother process of planning the economy democratically. The IMT has unwavering confidence in the creativity of the working class to run society without the bosses.

The lead off was also supplemented by excellent contributions, with detailed examples from the Venezuelan Revolution. We should emphasize that while things may seem a bit abstract as to how exactly worker’s control will look, the vision will be significantly more concrete when we enter into a revolutionary situation, when workers takeover the means of production, likely as a defensive measure at first, as a defense against the attacks of the bosses. An important analysis on co-ops was also raised. While we applaud democratically managed workplaces, we must also explain that these cannot survive indefinitely as “islands of socialism” surrounded by an ocean of capitalism.

The North East Regional School of 2015 ended with resounding singing of the Internationale and Bandiera Rossa as well as a clear vision in everyone comrades’ minds on what needs to be done to build the IMT. 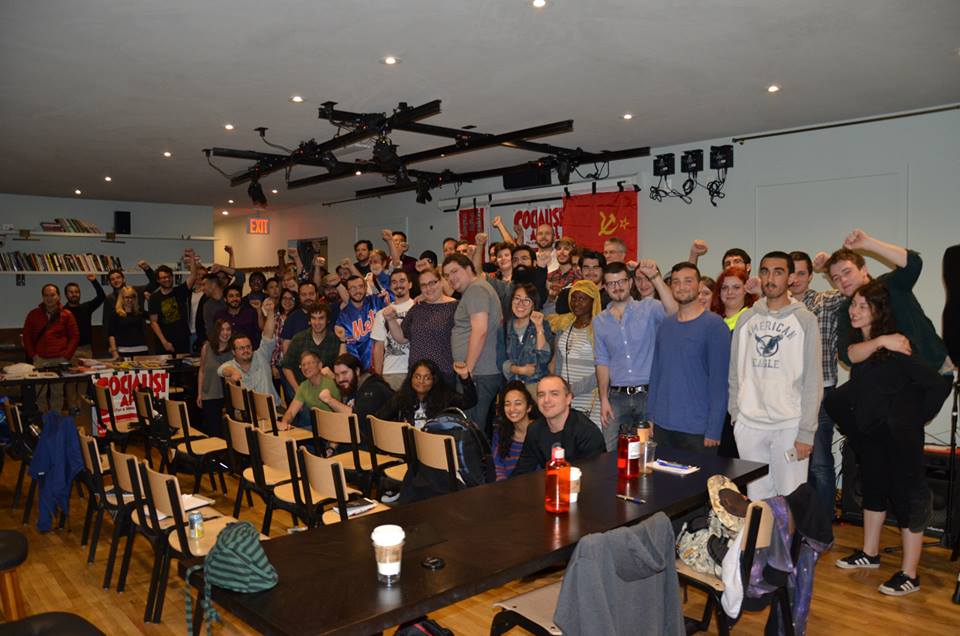