Another Year of Capitalist Wars, Crisis, and Misery for the Majority

A look back at the events of the last 12 months provides clear confirmation that capitalism means war, misery, and counter-revolution for the vast majority of humanity. The world situation is one of increasing political and economic instability, social polarization, and the ravages of war and famine. Across the planet, layoffs, cuts in social services, and the merciless squeezing of the working class and poor is on the order of the day. But there is an opposite side to these counter-revolutionary tendencies: the revolutionary movement of millions of people who are saying “enough is enough!”  Around the world, workers, youth, and the poor in general are rising up against a system based on exploitation and profit.

The war in Iraq continues with no end in sight, with nearly 4,000 U.S. troops and hundreds of thousands of Iraqis killed. An immediate and unconditional withdrawal is nowhere in sight. The anti-war movement has an important opportunity as we approach the 5-year anniversary of the war: to unite all anti-war forces for a massive mobilization. In the coming months, we must reach out to all those against the war and build maximum unity around the demand to “End the War Now!”  We must also struggle for the organizational and political independence of the movement from the pro-war politicians and their parties.

In Mexico, which is hardly on the mainstream media’s radar screen, the situation is explosive. The illegitimate Calderon government has no option but to attack the wages and conditions of the working class.  This is a recipe for social explosions on an even greater scale than was seen last year in Oaxaca. Already, workers, students, and grass roots organizations are mobilizing against the repression that has been unleashed in recent weeks and is sure to increase in the coming period.

In Pakistan, the farce of “democracy” has been exposed, with the imposition of a state of emergency by U.S. ally general Musharraf and the rounding up of thousands of activists, including members of the Pakistan Trade Union Campaign and the International Marxist Tendency.  Bush’s “war on terror” is coming unraveled at the seams, and the threat of social revolution in this strategically vital country is a very real and present danger to imperialism in the entire region.

In the U.S., the economy is teetering on the verge of recession. The violent swings on the stock market are a reflection of the deep uncertainty that affects even the most committed defenders of the profit system. After an extended “joyless boom” of modest GDP growth, massive corporate profits, mass layoffs, closures, and shrinking real wages, the bust in the housing and credit markets threatens to push the economy over the edge. 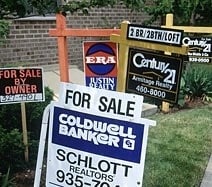 Sales of existing homes fell 1.2 percent in October to a record low of 4.97 million units. The median price for an existing home dropped 5.1 percent from a year ago, another record drop. The knock-on effect of this crisis has resulted in a credit crunch in an economy based largely on consumer spending – much of it on credit. Housing-related industries have also been hit hard. Imports of construction materials have dropped by as much as 15 percent.

The already weak U.S. dollar has taken yet another plunge against major currencies, with the lowest levels in decades against the Euro, British pound, Canadian dollar, and Swiss franc. This has helped exports somewhat, as U.S. goods are cheaper for other countries to buy, but imported goods, which account for most of the items bought by U.S. consumers, fell by 1.4 percent in August, the first decline after a decade of 10 percent annual growth.

Energy prices have skyrocketed, with oil now at nearly $100 a barrel. It’s hard to believe that back in 1998, oil was as low as $10 a barrel.  $3 a gallon at the pump is putting the squeeze on spending, and rapidly rising food and medicine prices literally force many poor Americans to choose between eating, taking their medication, or driving to work.

The trade unions are under vicious attack, with the auto workers at the forefront of the struggle to defend the wages, conditions and benefits wrenched from the bosses in the past.

It is against this backdrop of instability and increasing crisis that we enter the 2008 presidential elections. Once again, workers will be encouraged to choose between two representatives of corporate America.  But there may be hope. The emergence of the Reconstruction Party, which started on the Gulf Coast in response to the man-made tragedy of Katrina and its aftermath, reflects the deep-seated discontent with the status quo.  The RP’s platform calls for genuine democracy for the majority, the re-opening of public housing, rent control, compensation for home owners affected by the hurricane, health clinics at public schools, the creation of jobs at a living wage aimed at reconstruction, and support for public education.  By reaching out to the millions of workers and poor that are sick of war, low wages, and racism, the Reconstruction Party has the potential to develop into a party that can challenge the duopoly of the corporate parties. In the current atmosphere of total lack of confidence in the Democratic Party to address the needs of working people, the RP could develop rapidly if it is built energetically.

2007 was also the year that the crisis facing the environment finally hit home on a mass scale. The only possible way to ameliorate the damage done to our habitat by capitalism is to end this rotten system once and for all.

But despite all the problems facing capitalism, it will not fall on its own.  Ending this system of exploitation and misery will require the conscious action of the organized working class.  Join the Workers International League in the struggle for a better world – socialism!