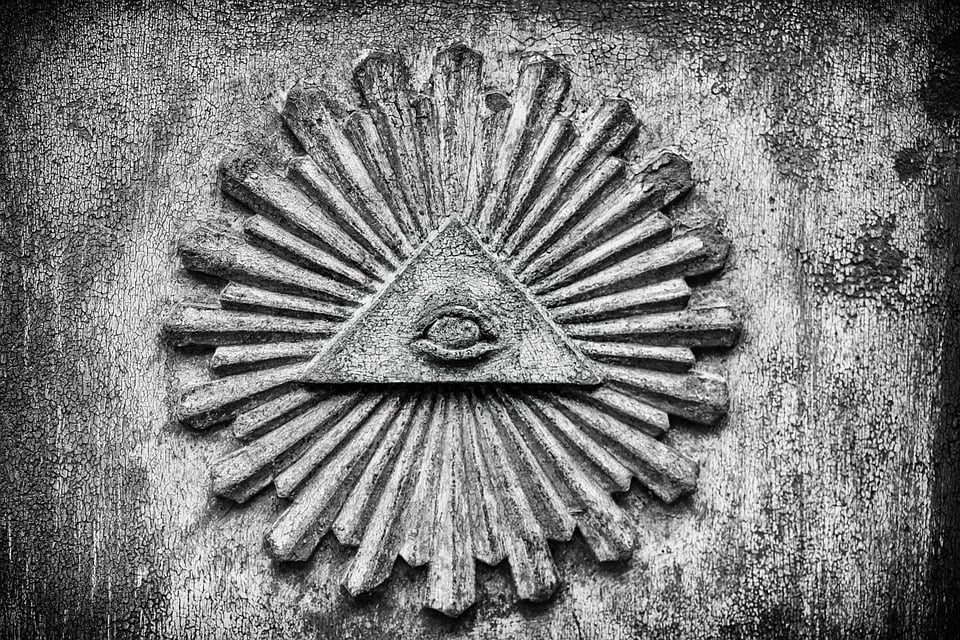 Black helicopters, Area 51, the Illuminati, Freemasons, “lizard people,” and the New World Order—these are the building blocks of what are called conspiracy theories. These “theories” are not actually theories at all, in a scientific sense, but are generally formed from a strange—and often extremely inventive—connecting of unconnected dots.

Conspiracy theories are extremely popular in the United States. According to polls, 80% of Americans believe that the government is hiding information about UFOs; 7 in 10 believe in a multiple shooters explanation for the assassination of JFK; and 15% don’t believe al-Qaeda was responsible for the attacks on 9/11. Internet speculation about which celebrities are or are not members of the “Illuminati” or the Freemasons is a sort of pastime for some people; the X-Files enjoyed a run of 9 seasons; and books featuring secret societies and their ties to world governments are perennial bestsellers, while conspiracy films draw millions at the box office.

Belief in conspiracy theories rose sharply in the 1960s, when many long-held ideological beliefs came under fire from the youth movement. These beliefs rose continually throughout the Vietnam War, and again in the aftermath of Watergate, as trust in the government hit new lows. Today, after the shock of 9/11, almost twelve years of wars under both the Bush and Obama administrations, and a lingering economic crisis, Americans’ confidence in the government, and by extension their willingness to believe it capable of almost anything, appears to be at an all-time high. But do these “theories” approximate the real relationship of forces in society? Do they offer solutions and a way forward?

When many people first begin to question the existing order, conspiracy theories offer a simple explanation. As Frank Spotnitz, a writer for the X-Files, explained, conspiracy theories offer “a magic key that fits all the pieces together.” For example, for most people, things don’t seem to be working properly in society. And yet we have all been told our entire lives that this system works.

From this starting point, it is an easy step for many people to draw the erroneous conclusion that the problem must therefore be that there are nefarious forces at work preventing the “normal” operation of things—a nefarious collection of conspirators operating behind closed doors.

Such conspiratorial logic is simple—at least on the surface—and plays into Americans’ philosophical predisposition towards pragmatism and empiricism. However, that does not make the line of thought correct. By contrast, Marxism offers a systemic and scientific explanation for the problems facing society. In other words, the rule of the minority of owners over the majority of workers is not dependent upon any “evil” intentions or backroom “cigarette-smoking men,” but rather, flows from the workings of the capitalist system itself.

While conspiracy theories typically view history through the lens of an oppressed majority vs. an exploitative minority, they tend to view this relationship not as a systemic arrangement—i.e. as the result of property and social relations in class society—but rather as unique “connections” of “bad men,” “behind the scenes,” preventing society from functioning “properly.” Conspiracy theories vary widely, but this reliance on “connecting the dots” is a universal feature of nearly all of them, and separates them from any genuine scientific understanding of social relations.

By contrast, Marxism is not a conspiracy theory. Rather than arguing that the exploitation of workers by capitalists is something that happens “behind the scenes,” Marxism instead explains how this exploitation takes place completely in the open, through the labor process and the production of commodities for sale. It requires no “conspiracy” to explain the class structure and exploitation of capitalist society. The worker, owning no property, is forced to sell the only thing he or she does possess—his or her ability to work—to the capitalist, who then extracts surplus value from that labor in order to make a profit.

The individual disposition of the capitalist is irrelevant to the basic process. An individual capitalist can, within certain limits, be a decent or a horrendous person, but in the last analysis, the nature of the economic system and his or her class position forces the capitalist to play a definite role: that of exploiting the workers. Those capitalists that extract less surplus value, and thus make less in profits, are inevitably outcompeted by more ruthless elements.

Beyond the simple operation of the economic system, the capitalist class relies on two other forces to maintain its rule. On the one hand, there are the forces of the state apparatus. This includes, in the main, the armed bodies of men and women, the military, the police, the courts and the prisons. Aside from this very material force, but also very important, is the force of what Marxists call “ideology.”

This is more than simply “media manipulation,” which is a very real—if often exaggerated—feature of advanced capitalism. Ideology is much more than simply the media. As Marx explained in The German Ideology:

By ideology, Marxists refer to the entire apparatus of ideas that reflect and justify a society. These include religious ideas, the belief in the “American Dream,” etc. While at times ideology may be used cynically by the ruling class to drum up support, there is not necessarily a “conspiratorial” component to it, as the ruling class may very well believe their own mythology. The ideas of this historical epoch are by default their ideas. Capitalist ideology is taught throughout virtually the entire education system, broadcast over virtually the entire media, reinforced through our workplace interactions, and in religious worship, etc. Unless otherwise questioned, the basic assumptions of capitalist society, i.e. the ideas of the capitalist class, are simply accepted to be the “norm.”

This is not to say that no conspiring ever occurs between capitalists, or that elements of ideology are never constructed in order to deceive the majority of workers. An entire field of market research and public relations is dedicated to this very element of propagandization in both private enterprise and in politics, but conspiracies are not the cause of exploitation. Rather, to the extent that conspiracies operate, they are aimed at maintaining the current system of exploitation, which does not have conspiracy at its base.

At their most basic level, conspiracy theories confuse cause and effect, or more precisely, they confuse a relationship or perceived relationship with causality. For example, a group of workers may be members of the same bowling team. They may discuss work when they get together to bowl, but their membership in such a club is not the cause of their coming to work the next morning. Rather, their social relations to each other through their position in the production process, i.e., their social ties through work, are the more direct cause of their being on the same bowling team.

In the same way, it is true that, given their positions in society, members of the ruling class are often members of the same—often very exclusive—social clubs as other members of their class. But these organizations do not cause capitalist exploitation any more than the bowling team causes workers to show up for work. Deals may be struck at meetings of “secret societies,” but the societies themselves are a product of the social relations of the capitalist system, rather than the inverse.

However, while the above merely represents the mistakes of a one-sided and mistaken theory and method, the obsession that many conspiracy theories have with particular groupings of capitalists, rather than the capitalist class as a whole, reveals an uglier side to the history of conspiracy theories.

Conspiracy theories did not begin in post-Roswell America. The idea that a grouping of “bad” people secretly dominates society from behind the scenes goes back well before this period, even earlier than the phrase “conspiracy theory” itself, which the Oxford English Dictionary traces back to 1909.

Traditionally, going back to the Middle Ages, the “conspirators” named in the prevailing “theories” of the times tended to be some of the very victims of the system: Jews, Gypsies, women, etc. The idea of an evil plot orchestrated by a scapegoat population was a very useful tool for the ruling class during feudalism. However, this role for the conspiracy theory did not end with the rise of capitalism.

Jews remained a primary target for conspiracy theorists throughout the 19th and early 20th centuries, who often drew a distinction between so-called “productive” manufacturing capital vs. “unproductive” finance capital, using the distinction as a means to single out “Jewish bankers” as the source of all of the nation’s problems. Such a racist distinction fails to recognize the exploitative nature of “good,” “national” manufacturing capital on the one hand, and the class divisions within the Jewish community and the national heterogeneity within finance capital on the other. Conspiracies featuring “Jewish bankers” grew popular among people such as Henry Ford in the United States, who published a series in his The Dearborn Independent on “The International Jew.”

Thus, conspiracy theories, despite at first glance appearing to be critical of the status quo and the existing order—i.e. capitalism—actually are historically an ideological product of the Right. Just as the ruling class under feudalism used anti-Semitism and other conspiracy theories to redirect anger at their tyrannical regimes toward a scapegoat population, in the same way, modern conspiracy theories redirect anger at the effects of capitalism towards either a layer of the capitalist class (financiers and bankers, i.e. usurers), a racial minority (with its own class divisions ignored by the “theorists”), or simply a “rogue” sector of government (Area 51, the FBI, the CIA, the ATF, the United Nations, etc.), rather than the system itself.

Nowadays, many on the Left spend their time arguing and debating over a wide variety of conspiracy theories. Ultimately, however, this does not pose any real threat to capitalism, as it does not call into question the system itself, but rather elements that have “gone rogue” within the limits of that system. Most conspiracy theories start from the premise that capitalism is the only way society can be organized, and conclude that things would be hunky-dory if only the conspirators were exposed.

Marxists, however, believe that what is needed is a rigorous and scientific analysis of capitalism, in order to better wage a concerted struggle against that system, which must be replaced by socialism. Such a struggle must be led by the organized working class, the only class capable of waging the struggle to the end. To substitute elaborate conspiracies for the real, living class struggle does not help clarify the true nature of capitalism or help in ideologically arming the working class to end it once and for all.