Detroit and the Bankruptcy of Capitalism 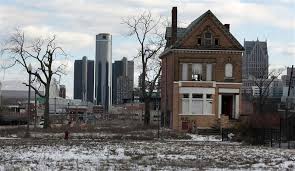 On July 18, the long–economically depressed city of Detroit officially declared its intention to file for bankruptcy. The bankruptcy is the largest ever for a US city, with $18 to 20 billion in debt. It is also the largest US city to ever go bankrupt, despite the disastrous collapse in the population over the last 30 years.

Hurricane Katrina dramatically exposed the terrible “third world” conditions that exist for millions inside the richest country on the planet. Although a natural disaster played a part in bringing things to a head, the tragedy in New Orleans was above all man-made. In the case of Detroit, however, the disaster is entirely manmade.

The city can no longer produce death certificates because of lack of paper. 20 square miles of land—roughly the size of Manhattan—is filled by abandoned buildings. With city services already reduced to a bare minimum, whole blocks of abandoned buildings are allowed to decay. There are an estimated 50,000 stray dogs in the city and just 4 city dogcatchers. The city is even considering selling off its airport and and a major park.

US 2010 Census data shows that Michigan lost 48% of its manufacturing jobs from 2000–2010. Along with manufacturing, Detroit was a power base for the US labor movement. Hundreds of thousands of union jobs have been slashed, replaced with low-paid service jobs, if anything at all. And now, one of the only unionized layers left, municipal workers, are having their pensions, wages, and conditions hammered, under the guise of the bankruptcy. And yet, the city government is proceeding with a plan to build a new $444 million arena for the Detroit Redwings hockey team!

The bankruptcy is now making its way through the courts, with state union leaders desperately pinning their hopes on sympathetic judges.

The anarchy of the capitalist economy has claimed yet another victim. But the class collaboration policies of the labor leaders are equally to blame for Detroit’s ignominious implosion. This represents an attack on all public employees and unionized workers around the country. Labor must learn from this tragedy and fight back with militant tactics against these attacks, or there will be many more Detroits.